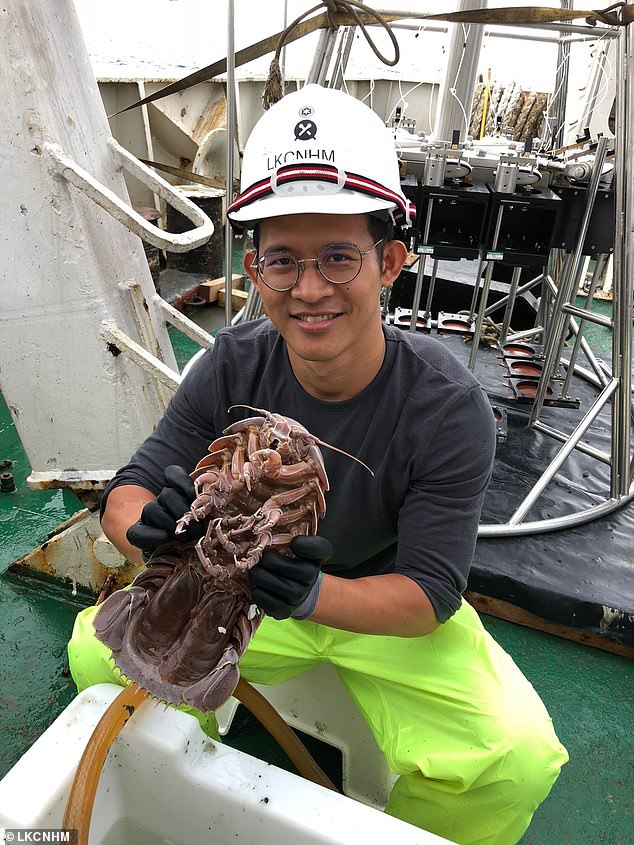 In total, the researchers collected 12,000 deep-sea creatures — including crabs, jellyfish, fish, molluscs, prawns, sponges, starfish, urchins and worms — comprising 800 species in total, of which 12, including Bathynomus raksasa (pictured) were unrecorded in the scientific literature

A 14-legged sea cockroach found in the Indian Ocean has recently been identified as new species ‘Bathynomus raksasa’ by researchers from Singapore after studying it for two years. It has been categorising as “supergiant” isopod and measures around 50cm (1.6 feet) in length.

It has a gruesome look and resembles the helmet of Star Wars’villainous Sith Lord and hence given the name ‘Bathynomus raksasa’. The marine survey has been conducted by Peter Ng of the National University of Singapore and colleagues where they have explored 63 sites over two weeks.

The activity has been carried out with the collaboration Indonesian Institute of Sciences where they have collected thousands of specimens from the depths using trawling, dredging and various types of seafloor coring devices. So, intotal, reasearchers has collected 12,000 deep-sea creatures that includes crabs, jellyfish, fish, molluscs, prawns, sponges, starfish, urchins and worms.

Bathynomus raksas resembles cockroaches and woodlice of the land but it is more closely related to the other marine species like crabs and shrimp. This kind of sea cockroaches mostly seen in the ocean beds that survive on the remains of the dead marine animals that have sunk to the seafloor, however, they are capable enough to survive for a long time without any food.

Bathynomus raksasa is thee second-largest isopod species known to science, superseded only by ‘Bathynomus giganteus’. Most of the isopods will reach around 13 inches (33 centimetres) in length but the giant isopod can reach upto 20 inches (50 centimetres) long thanks to lower levels of predation and the cold of the deep-sea.

‘The discovery of new species is a great achievement for a taxonomist. especially spectacular species in terms of size and even the ecosystem where the species is found,’ Cahyo Rahmadi of the Indonesian Institute of Sciences told the BBC.

The Full Study has been published on ZooKeys

14-legged sea cockroachcockroachfirst record of the genus from IndonesiaIndian Ocean