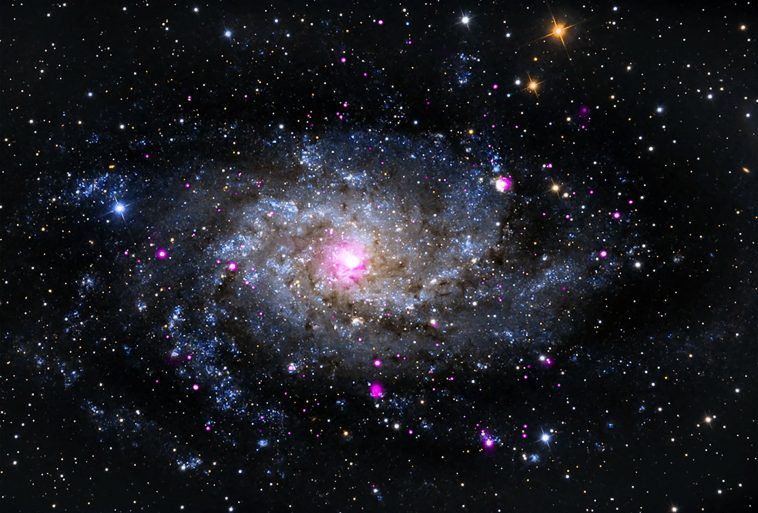 The Universe contains billions of galaxies. A galaxy is a collection of stars, dark matter, along with interstellar gas and cosmic dust particles. Nearly all galaxies have giant black holes in their centre. Galaxies can be elliptical, spiral, lenticular, or even of irregular shapes. Galaxies can either exist alone. Or in pairs or groups and collate to form more massive clusters and superclusters. Our Universe consists of galaxies shaped like jellyfish or a cartwheel, galaxies that consume other galaxies, and strange galaxies that lack dark matter. The diverse nature of galaxies is awe-inspiring, and every year newer ones are discovered and added to the vast collection. Below we explore the 16 most amazing galaxies in the Universe.

Amazing Galaxies in the Universe

The Milky Way is our galaxy containing our solar system and our Earth. It contains about 100 billion stars. The total mass of this galaxy is approximated at a whopping 960 billion times the sun’s mass. Most of the Milky Way’s mass is in the form of dark matter, which gives off no light. The centre of our Milky Way has a gigantic black hole. Small galaxies orbit the Milky Way and sometimes crash into it. They have been named Magellanic Clouds.

Galaxy ESO 137-001 is one amazing galaxy like a swirling jellyfish in a sea of stars. It is located in the constellation of Triangulum Australe. This galaxy is a form of a spiral galaxy i.e.; it forms a spiral shape with a bar-shaped centre. The tail of the galaxy extends like that of a jellyfish with a twist of streamers of stars. The beauty of this galaxy is enhanced by brilliant blue streaks streaming outwards from the galaxy. They can be seen shining brightly in ultraviolet light.

Another starburst galaxy is M82 or the Cigar galaxy. It is located in the constellation Ursa Major. Known for its immense brightness and shine, it is a hub of star formation activity. The Cigar galaxy has a massive star formation rate, i.e., a starburst due to gravitational interactions with its galactic neighbour, M81. M82 has young stars being born ten times faster than they are inside our entire Milky Way galaxy. In comparison to our Milky Way, it is about five times more luminous.

The Andromeda Galaxy or M31 is the closest neighbour of our Milky Way Galaxy. It is a spiral galaxy with a barred centre and is located about 2.5 million light-years from Earth. It is a rapidly moving galaxy known to absorb smaller galaxies for at least 10 billion years. Space scientists predict that in about 4.5 billion years, the Andromeda galaxy and the Milky Way galaxy will collide. However, which galaxy will devour whom, is not yet clear.

The Sombrero Galaxy is a lenticular galaxy in Virgo and Corvus’s constellation borders, 29 million light-years away. This galaxy can be easily seen from an ordinary telescope. It is one of the Universe’s most elegant and beautiful galaxies and resembles a Mexican hat of the same name. It has a large central bulge and a bright nucleus, with spiral arms. This galaxy may contain around 2,000 globular clusters in its core. It is about 30% of the Milky Way size with a supermassive black hole in its centre.

Rubin’s Galaxy, or Godzilla galaxy, is a large barred spiral galaxy of type UGC 2885 in the constellation Perseus. Rubin’s Galaxy is a field Galaxy, i.e., it lies in a vacant space that isn’t even near satellite galaxies.

It is 232 million light-years from Earth. It is one of the most giant known spiral galaxies, being 2.5 times wider than our Milky Way.  It consists of 10 times as many stars in our galaxy.

The UGC 10214 is known as the tadpole Galaxy because it resembles a large tadpole in the sky. It is located three hundred million light-years away from our Earth. This galaxy has a tail that is 500,000 light-years long-about ten times longer than the Milky Way!  Its structure consists of two disk galaxies pulled on a smaller dwarf galaxy. This clubs together with the stars on one end into ahead. The remaining stars stream out from the other end in a long tail.

A powerful starburst galaxy, the Baby Boom galaxy is the brightest starburst galaxy in the very distant Universe. It was discovered by NASA’s Spitzer Science Center. This galaxy produces stars at a whopping rate of up to 4,000 per year, whereas our Milky Way produces just ten stars per year! The different colours in the figure of the Baby boom galaxy refer to different wavelengths. The red colour is by the newborn stars in the galaxy, and yellow is by stairs from the outer portion of the galaxy.; the green colour is indicated by the existing gas, whereas the blue areas indicate those areas which do not have much starburst activity.

One of the most amazing galaxies, The Cartwheel Galaxy is a ring galaxy about 500 million light-years away, located in the constellation Sculptor. This galaxy is about 150,000 light-years in diameter and is slightly larger than our Milky Way. This galaxy is surrounded by a faint disk that extends to twice the diameter of the ring. Including this, the Cartwheel Galaxy is 2.5 times the size of the Milky Way. The Cart Wheel Galaxy has a mass of about 3.85 billion solar masses. It is surrounded by a blue ring of a starburst of billions of new stars.

This is another fantastic galaxy. You can quickly identify it by a spectacular band of absorbing dust around its bright nucleus. M64, or the Black Eye galaxy, is known for its bizarre internal motion. The gas in the outer regions of this galaxy rotates in the opposite direction from the gas in its inner areas. New stars form in the region where the oppositely rotating gases collide. It is one of the most amazing galaxies in the world.

Whirlpool Galaxy also is known as Messier 51a, M51a, and NGC 5194 is an amazing spiral galaxy with a Seyfert 2 active galactic nucleus. This is the first spiral galaxy that was identified and located in the constellation Canes Venatici. It lies at 23 million light-years away from Earth. The galaxy is very easily visible with the help of binoculars and observed by professional astronomers who study the galaxies associated with the spiral arms and even interaction between the galaxy.

Pinwheel Galaxy is one of the beautiful and amazing galaxies in the universe. It is also known as Messier 101, M101 or NGC 5457 and from the front view, it is a spiral galaxy which is around 21 million light-years from the planet Earth. The galaxy was discovered by the Pierre Méchain on March 27, 1781, and later was communicated to Charles Messier who verified the exact position of the galaxy. NASA and the European Space Agency has released a clear image of the Pinwheel Galaxy on February 28, 2006, with the help of Hubble Space Telescope at the time.

Triangulum Galaxy is also one of the beautiful spiral galaxies which is 2.73 million light-years from planet Earth located in the constellation Triangulum. Also known as Messier 33 or NGC 598. This is the largest Galaxy following by the Milky Way and the Andromeda Galaxy. It is one of the galaxies that can be viewed with the naked eye. The smallest galaxy in the Local Group and it is believed to be the satellite of the Andromeda Galaxy. The name of the galaxy comes from the constellation Triangulum where it was spotted.

Messier 94 or M94 is a spiral galaxy which is approximately 16 million light-years away in the constellation Canes Venatici. The galaxy was discovered by Pierre Méchain in the year 1781 who is a French astronomer and an asteroid is already named after it in 2002. The best time to see this galaxy is in the month of May. Initially, it was believed to be roughly 30,000 light-years in diameter with two and extended in the space.

Stephan’s Quintet is a group of five galaxies and the group is in the constellation Pegasus that was discovered by Édouard Stephan in 1877 at the Marseille Observatory. The brightest of the group is NGC 7320. It is seen with red blobs and believed active star is forming in the middle of the red blobs. One of the galaxies NGC 7320 observed to have a small redshift while the other four exhibit large redshifts. The redshift is directly proportional to the distance and is approximately 39 million light-years from Earth.

NGC 6744 also known as Caldwell 101 is a beautiful intermediate spiral galaxy which is approximately 30 million light-years away located in the constellation Pavo. This has been discovered from Parramatta in Australia by Scottish astronomer James Dunlop on 30 June 1826. The amazing galaxy lies within the Virgo Supercluster.

These are some of the remarkable amazing galaxies in our massive Universe. There exists an immensely varied array of galaxies, ranging from dwarf objects to brilliant giants. Galaxies pervade space and into the depths of the Universe’s farthest limits that have still not been discovered by powerful modern telescopes. These are the amazing galaxies in the world. Kindly share and do post your comments.