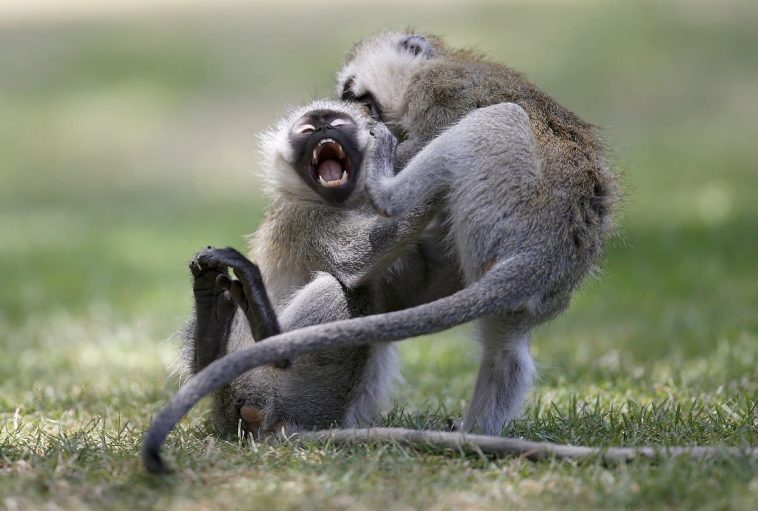 Animals display agonistic behaviour in social environments. This aggressive behaviour includes threats, displays, retreats, brawls, and conciliation among members of the same species or different ones. Agonistic behaviour is seen in many animals to gain possession of food, mate, or a territory. Animals unquestionably kill members of their species. This is evident by the fact when male lions slaughter all the cubs when they join a new pride. Similarly, rival ant colonies of the same species fight wars; even chimpanzees have been shown to kill each in fights. We will discuss animal fights in the world.

These animal fights involve tests of strength or threat displays that make the contesting animals powerful and superior. All predatory animals, like lions and hyenas, will fight to defend their territory or defending their food source. Whatever be the reason for these power plays, animal fights are interesting and sometimes, dangerous as well. Below we discuss the top fights between pairs of animals that are popular scenes of power and horror.

Cats are territorial animals. This applies to all members of the cat family, ranging from the domestic felines to the big cats like the tiger, jaguars, and leopards. They will often fight to defend their territory. You can commonly find cats engaged in battles outside your house. Male cats are especially aggressive when another cat has encroached on their land. Catfights involve angry meowing sounds and even screeching and growling. It slowly escalates to the cats biting each other’s necks. Brawls may follow as a predatory move.

Out there in the open savannah grasslands of Western Africa, fights between lions and herds of giraffes are common. The lion in search of prey will stalk and close on a group of giraffes or even a single one, grazing out in the open. A single lion may get kicked or gored to death by a group of giraffes. Lions commonly attack the giraffe first for the back. They will surround a giraffe; hold it by the hind legs, and then the back. The lions will typically try to trip an adult giraffe as it gallops. They can even climb on its top, while others attack around his legs. Most of the time, they can bring down a giraffe; but sometimes the huge adult giraffe, can kick the lion violently and escape into the bushes.

The rivalry between a snake and a peacock has continued since times immemorial. Peacocks do not allow snakes to live within their territory. If they find a snake, it immediately starts an active fight between the two. Peacocks stay strong in front of the snake amidst all the hissing and crawling. They can hold the snake down with their claws and can kill it slowly by the neck, shaking it violently. They can then swallow the snake. Rarely enough can a snake survive?

Both Rhinos and hippos are huge animals with heavy body weights. An adult rhino can be 11-13 ft in length and can weigh up to 2400 kg. A male hippo can weigh 1,500 kg and are giant creatures. Rhinos have very poor eyesight and rely on their sense of smell to see their surroundings. A large Rhinoceros can attack an angry tempered hippo, with a full head-on charge. Rhinoceros punch with several minor jabs in fights with its horn. Hippos take advantage of their enormous mouths and can deal with massive tears on the Rhino.

This is another power match between two giants. Crocodiles have a huge bite force but their mouths are smaller than a hippo’s mouth. So, by power and size, hippos can bite a crocodile in half and can get victorious. Crocodiles generally find it easy to attack a hippo calf and not the adults. The hippo can easily open its mouth wide enough to surround the crocodile, and crush it with its tusks.

7. Anaconda vs. any animal

Anacondas are the world’s largest and heaviest snakes and are apex predators. They can grow up to 30 feet in length and can weigh more than 550 pounds! It is very difficult to escape from the ghastly grip of an adult anaconda, which can be up to 12 inches in diameter. Anacondas kill by squeezing the prey to suffocation. They can exert a huge crush force of 90 psi! They swallow the prey whole, head first. The anaconda’s jaws are attached with stretchable muscles. So, they can swallow animals much wider than their size. Occasionally jaguars may be successful in killing a large snake. But, the anaconda wins most animal battles with its prey.

Monkeys are highly social animals and stay in large groups. They are very conscious of their territory and do not allow other intruders in their living zone. They can start fierce brawls mostly over food and territory reasons. Most fights start with just one monkey throwing punches at another. This can often escalate into a full-fledged fight involving the majority of the adults in the group. Loud chattering, grinding of teeth, punches, pulling and even biting-monkey fights are fierce, if not deadly.

Guanacos belong to the llama family and are native to mountainous regions of South America. These animals generally stay calm and in groups. But, when instigated, they start a fight by biting each other’s front legs. You will find a lot of male guanacos engaging in fierce fighting matches during their mating season, which is from early December to January. Guanacos can stand up on their hind legs and fight with each other for a long time. They can also bite and spit on their opponents.

Gorillas are powerful and large primates. They are our closest relatives and are 4-9 times stronger than humans. They are also passionately territorial animals. They attack in groups. They can charge on opponents with full force, displaying acts like hitting their chests, stamping their feet, and making loud sounds to show their strength. Male gorillas can sometimes kill each other in one-on-one fights with rival groups.

These are some popular and interesting animal fights. Many other animals and birds can fight fiercely to defend their food, mate, or territory. Birds like the cassowary, eagles, falcons, and crows can show angry behaviour as well by fluffing their feathers, making angry sounds, or by standing tall or flashing its crest or colors. These fights are survival techniques and not just hate tactics like humans. These are some of the major animal fights in the wild. Kindly share and do post your comments.