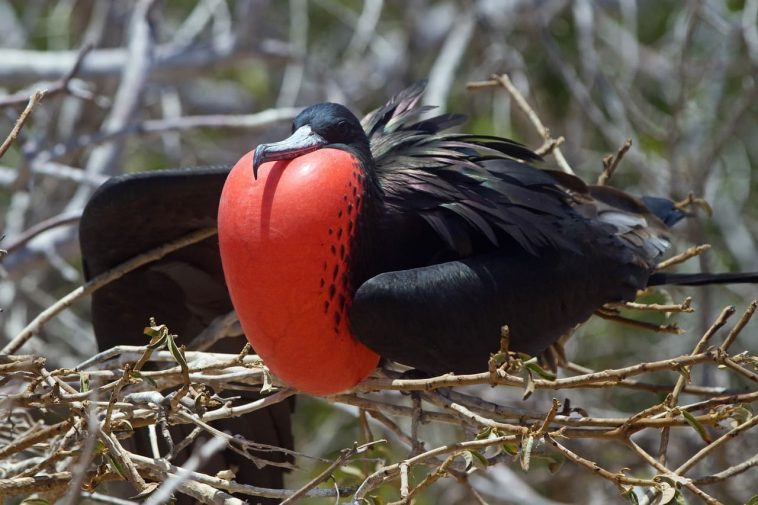 The world around us is full of elements very beautiful and unique that makes them attractive. Nature has bestowed animals and birds with unique survival features, some of them weird enough to attract attention. Wings, large beaks, patterned skins, long tails, and strong bones are some of the features animals possess to help them survive in the animal kingdom. Some animals, mostly birds possess one such remarkable feature known as the Gular Pouch or a throat pouch.

Birds have a gular pouch in the form of an area of featherless skin that joins their lower beak to the neck. The skin forms a flap, or a gular pouch, which is used to store fish and other prey while hunting. Other animals may have a similar throat pouch in the form of a gular sac, throat sac, or vocal sac. Below we examine the top 10 animals with a gular pouch. The beauty of their gular structure will leave you awe-struck. Check them out.

Animals with a Throat Gular Pouch

Frigate birds belong to the family of seabirds which are found across all tropical and subtropical oceans. They are distinguished by their black plumage, long, deeply forked tails and long hooked bills. Their long narrow wings can reach a wingspan of about 2.3 m. The male birds have a bare red skin patch on their throat which is the gular sac. This is hardly visible outside the breeding season. Come the breeding season, and the male birds display their inflated bright red gular sacs for courting, which gets inflated to the size of a person’s head.

The Great White Pelican dwells across Europe through Asia and Africa. It is one of the world’s largest flying birds found in the shallow swamps of and lakes. This waterbird has a hefty but spectacular bill which is azure blue on the top and yellow underneath where there is a large yellow-orange throat pouch. The Greta White Pelican uses its huge, long bill to scoop up fish from the water. The pouch under the beak can hold several litres of water, almost three times the size of their stomach.

The Brown Pelican is a North American bird of the pelican family. This is an elegant bird with a big, dark body, a very long, oversized grey bill with a large pouch of skin.  These pelicans dive headfirst into the water from great heights (up to 50 feet) to scoop up fish near the surface. They drain the water from their pouches before swallowing their prey. The Brown Pelican is protected by the U.S. Migratory Bird Treaty Act.

The Blue Jay is a common American large songbird. It is known for its crest; blue, white, and black plumage; and noisy calls. One of the loudest and most colourful birds of eastern back yards has a gular sac, which opens underneath the bird’s tongue. It reaches down into the throat and upper esophagus. With this, a blue jay can store as many as five acorns inside it! Thus, blue jays can be significant dispersers of seeds.

The Marabou Stork is also known as the “nightmare bird” or “undertaker bird”. Marabou storks also have large black wings and skinny white legs and can be up to 5 feet tall. They have beady eyes in a bald head and scabby pink faces with huge gullet sacs dangling from their necks. Marabou storks use their gular sacs for mating. The males will puff up these 18-inch long sacs when trying to attract a female.

The Wreathed Hornbill is a species of hornbill found in the forests of India, Bhutan and Southeast Asia. This large hornbill is black, with a whitetail. Only the male has chestnut-brown on the head and a bright yellow throat with an inflatable pouch. The female has a bright blue throat. Their beaks look like made from carved wood. These hornbills require vast and protected territory to flourish.

The Southern Flying lizard or the Indian flying lizard is a species of lizard found in the Western Ghats and hilly forests of Southern India. They are found on trees in forests and palm plantations. These lizards are brown with patches of grey that match the pattern of tree barks on which they glide. They can change their colour to a limited extent. They can glide by extending their patagia, flaps of skin on the side of the body as wings. Males have a small crest and a yellow gular sac on the throat.  The male lizards bob their head and inflate the gular pouch when they find females nearby.

White Ibises are large wading birds with long legs and a long neck. They are native to the coastal regions of South-east America. Their bill is long and curved. The bill and legs are bright red and there is a bright red gular sac at the chin. This attractive red gular pouch is only displayed by the female White Ibis during the mating season. This sac is only visible for 10 days or so in the mating season.

Siamangs belong to the black gibbon species of monkeys. They are inhabitants of the forests of Indonesia, Malaysia, and Thailand. The Siamang is much larger than other gibbons, reaching 1 m in height, and weighing up to 14 kg. One of the most noticeable features of a Siamang is their gular sac. It is a large throat pouch that can get as big as their head! It helps to amplify their call which makes them very loud and noisy! This distinguishes them from other gibbon species. Siamangs are now an endangered species.

Howler monkeys are among the largest and the loudest of the monkeys. They are famous for their loud howls, which can travel up to 3 miles even through a dense forest. These monkeys inhabit the South and Central American forests. The canopy layer of the forest is mostly their home. Howler monkeys can call extremely loudly to warn others about their territory. The calls sound like a roar or a loud whooping bark. Their special voice box and the gular pouch in the throat amplify the sound and send out really loud calls.

These are some of the animals with a noticeable gular pouch that adds a unique appeal to their existence. The gular pouch maintains its significance in these animals whether it is for food storage, display purposes or simply for wooing their mate.