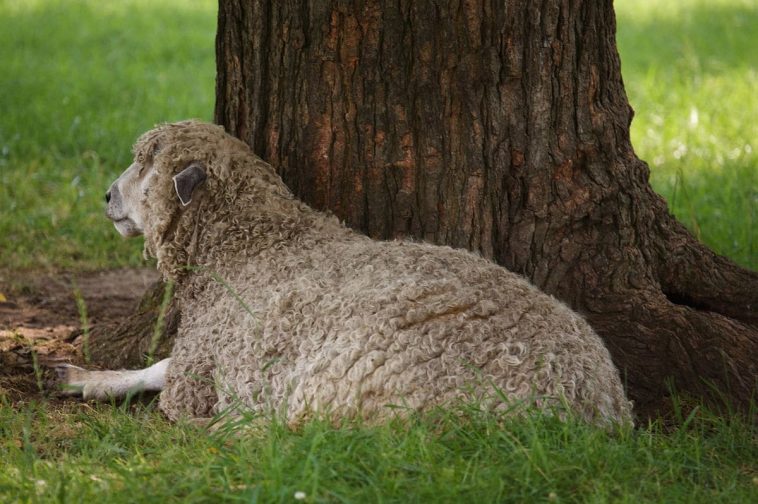 People choose to deck up their hair with braids or dreadlocks, or leave them just plain straight or choose to weave. Dreadlocks are not just common with people. These braids of matted hair that resemble ropes can be found in some animals as well. They can get natural dreadlocks if they have very thick hair that can get into knots or tangles or long matted braids, without proper grooming. Once a dreadlock is formed, new hair will continue to grow in that tangled pattern.

Not all dreadlocks are signs of sheer neglect of hair. Many animals like horses, yaks, some species of dogs, and alpacas develop fuzzy dreadlocks and matted, hairy coats. Below we have a look at some of the animals that are known for their dreadlocks

Suri alpacas are a rare species of camel-like creatures or alpacas. They make up only 5% of the world’s alpaca population, with only 2,000 Suris left in the world. They are native to South American countries like Peru, Chile, and Bolivia. In Peru, an unshorn Suri is known as a “wasi”. Some breeds of alpaca, like the Suri, show a natural coat of dreadlocks. These animals have a coat that falls completely to the ground. They have a long hanging, dreadlock type fleece that hangs close to the body and moves freely. It is fine and dense. Their dreads have spiralled in the lock and can be wavy or twist to either side, instead of hanging down.

The Wensleydale is a British breed of domestic sheep, native to the Wensleydale region of North Yorkshire. They are easily recognized by their extremely long fleece arranged in well defined curly locks. They have a broad head which is partly covered in fine wool. Wensleydales are known as a ‘luster longwool’ breed. Their wool is renowned for its sheen and brilliance of their fleece. Their wool has long and soft fibre, and natural shine of its own. A typical Wensleydale lamb may take 15 months to grow its full fleece. Once grown, their fleece can be sheared to produce about 5 kg of usable wool per sheep.

The Leicester Longwool is an English breed of sheep. They are a medium to large breed. They are found in the US, Great Britain, Australia, and New Zealand. The English Leicester sheep are large animals. They have a wedge-shaped face covered in white hairs no forehead horns. The fleece is curly and soft, with a distinct luster. It is a critically endangered sheep species. It is mainly raised for its wool and meat.

The yak is a long-haired domestic animal from the cow family. It is native to the Himalayan region of the Indian subcontinent, the Tibetan Plateau, and extends up to Mongolia and Siberia. A Yak is shaggy, large-horned giant, a hairy cow that has been domesticated in the Himalayas for thousands of years. Wild yaks can be as tall as 2 meters and weigh over 800 kg. Yaks have long black hair which is heavily fringed.  They are used for ploughing and farming in the cold plateau regions, as well as for meat, hides, and fur.

The Poitou Donkey is a cute and cuddly species of donkeys from the Poitou region of South France. It became almost endangered about 30 years ago, but thanks to a rigorous conservation program, their population is now back to normal. This is a donkey with thick, long but soft dreadlocks on its dark brown furry body. These animals can grow up to 1.5 m in height and are social creatures that need a lot of open space. They remain a hobby breed for the wealthy French farmers, who can spend thousands of euros on them.

The Angora goat is a breed of domestic goat, native to the Angora region in Asia. They are the only breed of goat to produce a much sought-after fibre like sheep. Angora goats produce “mohair” which is a lustrous fibre that is strong and elastic and differs from wool in its smoothness and lustre. The Angora goat can be easily mistaken for a sheep due to their thick, curly coat. The Angora is generally smaller than other domestic goats and sheep and is beautiful to look at. They have long and drooping ears.

The Bergamasco Shepherd is a breed of dog with its origins in the Italian Alps near Bergamo. It was originally used as a herding dog. It is a muscular herding dog with a large head and heavy bones. Its thick tail hangs down and curves slightly upward at the end. Bergamasco has an abundant matty and felted coat. The dog’s hair grows long into flat mats or flocks. The hair starts growing every year to reach the ground. The Bergamasco becomes very close to its owner.

The Komondor is known as the Hungarian sheepdog. It is a large, white-coloured Hungarian breed. They are known to be very good livestock guardian dogs and guard sheep in pastures. It has a long, corded coat. The Komondor is a dog breed commonly employed to guard livestock and other property. A Komondor puppy is expensive and costs around $1000 as a good pet dog. The dog takes a beautiful appeal with its dreadlocks.

The Puli is an energetic and agile breed of dog from a hunting background. The most famous Puli dog is ‘Beast ‘owned by the founder of Facebook, Mark Zuckerberg. The Puli is a small-medium sized dog who guards livestock. It has a long, corded coat with tight curls of the coat similar to dreadlocks. The Puli is a hardworking herding dog and a good family companion. They are energetic and lively and are a large dog breed from Hungary.

The Spanish Water Dog breed is a general-purpose sheepdog from Spain. They are used as great herding and guard dogs. It is also used as a gundog and is skilled at retrieval from water. These dogs have a beautiful brownish golden coat of wooly curls. They are an active and energetic breed of dog with herding instincts. These dogs can make excellent family pets.

These are some of the unique animals with dreadlocks. They have their appeal and their dreadlocks add further beauty to their existence. Besides these animals, there are some species of dogs as well that are known for their dreadlocks that give them a unique appeal.