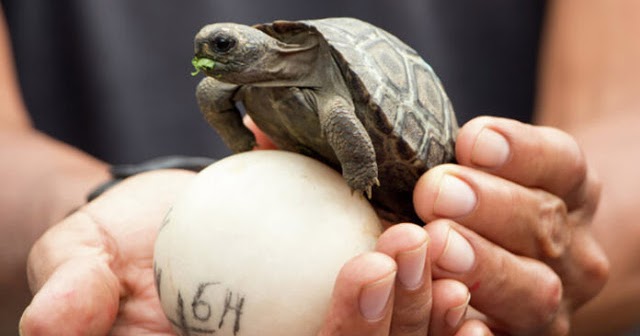 There are numerous animal species are struggling to survive the changing environment. The loss of the species is one of the major problems we are facing today since it is disturbing the natural ecosystem of flora and fauna. Any species which goes extinct is a loss to the planet and other species as well.

The story of tortpsies in the Galapagos islands is now million years old. The researchers and spotted a small group of baby tortoises on Pinzón Island in the Galapagos Islands after tremendous conservation and repopulation efforts. The species is on the verge of extinction and this is one of the good news for all of us.

These turtles were spotted by the researcher names James Gibbs, who is a professor of Vertebrate Conservation Biology and Associate Chair of the Department of Environmental and Forest Biology at the State University of New York, He said in a statement, “I’m surprised the turtles have given us the opportunity to make up for our mistakes after so much time.”

These turtles are on the verge of extinction because of inhuman activities and these birth will give a new start to the species and protect them from becoming extinct. The story started from the mid-eighteenth century where sailors have landed on the Pinzón Island unintentionally caused an environmental disaster.

Since, the introduced rats in the area that used to eat the eggs of various species, including tortoises by quickly adapting in the fragile ecosystem. The natural disorder of the island has been disrupted. Now, there are three factors that cause the issue, first was attacks from larger species, the second was destructive human activities along with rat invasion made these tortoises an endangered species.

Till 1960, the population has been reduced to 100-200, now the various conservation agencies come in to picture and started saving the tortoises. They try there best to save the egg specimens on the island by collecting a hundred eggs and hatched them on another island and after 5 years they brought them back to the Pinzon. Still, rats are one of the concerns and in 2012, Island Conservation of the Galapagos National Park Directorate conducted a rat eradication campaign and destroyed them with the help of air-dropped rat poison.

James Gibbs explained, “The incredible eradication of rats on this island, carried out by the park service and others, has created the opportunity for turtles to reproduce for the first time”. Gibbs wrote that this also proved that hard work, support, dedication, and conservation efforts can effect positive change.

After making such efforts, the reasezchers see that the new hatchlings crawling across the path in the first part of the Island which is a sign of the atural order in the ecosystem was finally restored. Finally Gibbs said, “This is the first time they’ve bred in the wild in more than a century. I’m sure there were a hundred times more hatchlings out there.”

The total number of tortoises is around 500 now and the destroying island has become the island of recovery now, the credit gies to the awesome work of the Galapagos National Park Service and its many collaborators. “