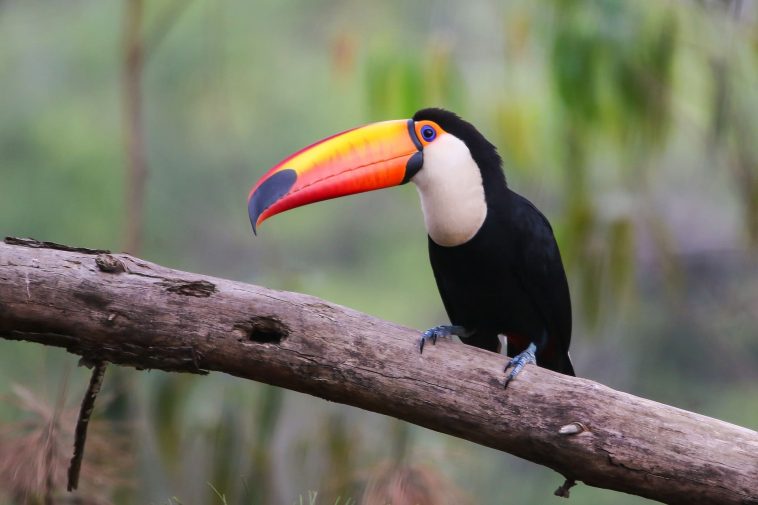 Brazil is widely acclaimed for the sheer abundance and diversity of flora and fauna to which it is home. It is the residence of more unique freshwater fish and amphibian species than any other country in the world. The Brazilian homeland with the Amazon rain forest is host to a myriad of tropical fauna, including hundreds of varieties of macaws, toucans, parrots, and other brightly different types of birds and brilliant butterflies. Just in Brazil, more than 100,000 invertebrate species have been discovered by scientists. Brazil has a rich collection of hummingbirds, toucans, parrots, macaws, waterfowl, and birds of prey. A riot of colors, feathers, and unique features, make these beautiful birds unique inhabitants of the Brazilian rainforests. Below let us check out the top 10 birds in Brazil and what makes them so special.

The Amazon Kingfisher resides in areas of lakeshores and slow-flowing rivers. They are large dark bronzy green birds. They have a ragged crest, a white throat and collar, and a white belly; Amazon Kingfishers are looks-wise similar to the Green Kingfisher Chloroceryle Americana but are much larger with a heavier bill.  They hunt fish from a perch, diving into the water to catch their prey. These kingfishers hover above the water before diving to catch their prey in the water.

One of the most popular birds, Scarlet Macaws or Ara Macao are brightly coloured long-tailed birds and are some of the most spectacular parrots in the world. A typical macaw has a brilliant red, yellow, and blue plumage and is native to humid evergreen forests of tropical Central and South America. Macaws are the largest parrots in the world. The colourful body of the scarlet macaw can be as long as 33 inches from beak to tail. Macaws can be easily tamed and can mimic sounds.

Also Read: Why Do Animals Have Tails

Another beautiful variety of the macaw is the Hyacinth Macaw or the Blue Macaw. It is the largest bird in the macaw family and the largest of the flying parrot species. This bird has a stunning cobalt blue colour all over its body, with a ring of bright yellow around its eye and at the base and the corners of its beak. They are known to be relatively gentle birds and can make fine pets.

One of the best looking animals, the Giant Toucan or the Toco toucan (Ramphastos toco), is the largest and probably the best-known species in the toucan family.  These birds have a unique oversized and colourful bill. They can grow to 25 inches long and weigh nearly two pounds. Their bill accounts for nearly half of their body length. Toucans are considered sacred birds by the Native Americans. They are traditionally seen as a channel between the worlds of the living and the spirits.

One of the most colourful birds, the Jandaya parakeet or Jenday conure is native to wooded habitats in northeastern Brazil. It has several names like the Yellow-Headed Conure or the Flaming Parakeet. This is a small parrot with green wings and a tail and a reddish-orange body. Its yellow head and neck, orange cheeks, and black bill make it as colourful as it can be. They can live up to 30 years, making them almost lifelong companions when taken as pets.

The Brazilian ruby is a species of hummingbird found in forests of eastern Brazil. It is a relatively large hummingbird with a straight black bill. Males are mostly green with a rusty lower back and tail. These birds are noteworthy for an iridescent pink throat and white mark behind the eye. These hummingbirds can rotate its wings in a circle. It can fly both forwards and backward; up or down, move sideways, or hover in one spot.

An Aracari is a beautifully coloured, medium-sized toucan. They are brightly plumaged and have enormous bills that have beautiful contrastingly patterns. They are typically found high up in the forest canopy of the Amazon rainforests. They come in several species like the Collared Aracari, Green Aracari, Black-necked Aracari, and the fabulous Saffron Toucanet. They are resident breeders and do not migrate.

The violet-capped wood nymph is another beautiful species of hummingbird in the family Trochilidae. It is found in forests, and dense woodlands, in south-eastern Brazil. They commonly visit gardens and bird feeders in Brazil. Male wood nymphs have a metallic green body, dark wings, a long deeply forked blue tail and a violet crown. Female birds have a green crown and are pale grey below with a shorter tail. These birds search for plant nectar from low lying plants to canopy level.

9. Ararajuba or the Golden Parakeet

Ararajuba is the Golden Parakeet or Golden Conure. It is a medium-sized golden-yellow parrot found in the Amazon Basin of Northern Brazil. It has a flaming bright yellow plumage and bright green-tipped flight feathers. Golden parakeets are a social species. However, due to the high demand for its attractive plumage, the bird is being hunted and is listed on the IUCN Red List as vulnerable. Deforestation and the capture of wild birds for aviculture have led to their species becoming less in numbers.

The bright and cheery Blue Dacnis is a welcome sight. Also known as the Turquoise Honeycreeper, it is a small passerine bird that inhabits forests and woodlands of Southern Brazil. The male Dacnis is a bright turquoise blue with a black throat, back, and tail, whereas the female is mostly lime green in color with a blue crown. They have sharply pointed bills. Blue Dacnis are social birds, and they feed primarily on insects and fruit, and nectar. They are known to migrate over short distances.

These are some of the most beautiful and amazing birds found in Brazil. Known for their bright colors, plumages, and chirps, these birds are not only a sight of beauty but some of them also make great pets. These are the top 10 beautiful birds of Brazil. Kindly share and do post your comments.