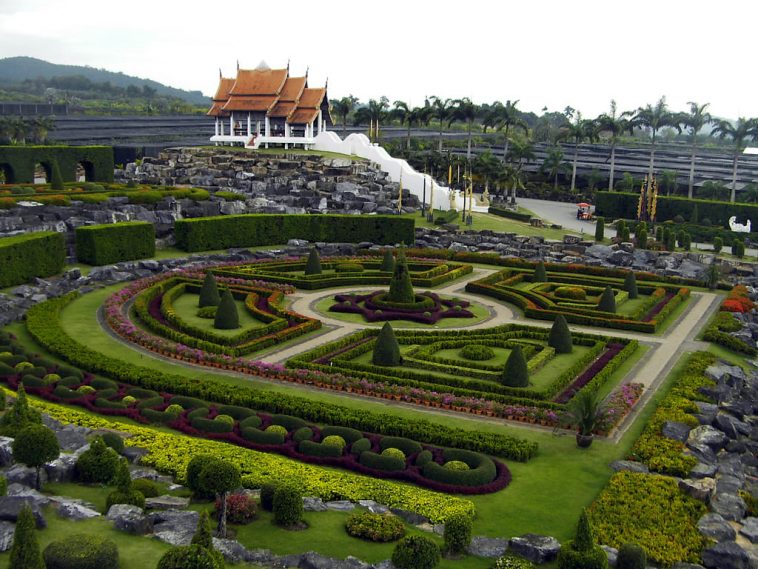 Garden is one of the best places where you will feel close to nature and walking along the lane of the garden will give you a special feeling. Gardens can be in the form of small neighbourhood garden or a large palace garden, however, undoubtedly it is the most peaceful and relaxing place one can find in the chaos of the city. There are many interesting and beautiful gardens in the world such as the Gardens of Versailles in the region of Île-de-France, the Gardens of Schönbrunn in Vienna, Austria, and the list goes on, Here is the list of 10 most beautiful gardens in the world,

Beautiful Gardens In The World

Gardens of Versailles is the most beautiful and largest garden in the world that cover a span of 800 hectares of land. This is one of the perfect examples of French garden design and if you want to study every detail about it will take a year or so. The 800 acres of land is divided into 300 hectares of forest, the other 100 acres of flower beds along with 35 kilometres of canals. It also has 600 fountains and 372 statues situated across the garden. It is administered by the Public Establishment of the Palace, Museum and National Estate of Versailles which is an independent public operating system of France worked under the aegis of the French Ministry of Culture. The garden is a part of UNESCO World Heritage Listsince 1979.

Nong Nooch Tropical Garden is one of the most beautiful and popular gardens across the globe. It was spread in a span of 500-acre and has hundreds of species of flowering plants out of which 670 are native to the Thailand region. There are other plan species includes cacti, bonsai, ferns, and orchids. The largest garden of Thailand can be reached easily by bus, taxi or private land transportation. The botanical garden is also a major scientific centre dedicated to the cycads and has its own Cycad Gene Bank.

Keukenhof is the beautiful garden of the Netherlands also known as the Garden of Europe. This is the world’s largest flower garden located in the town of lisse of Netherlands. The garden is spread in a span of 79 acres and is home to 7 million flower bulbs across the area. It is mostly famous for its tulips, however, other beautiful flowers can also be seen like hyacinths, daffodils, lilies, roses, carnations and irises. The garden can be easily reached by bus from Haarlem and Leiden train stations as well as Schiphol. The garden is only open to the public for 8 weeks during the Tulp display from mid-March to mid-May. The peak of the tourist season will arrive near mid-April, however, it also depends on the weather.

Chateau de Villandry is a grand country house situated in Villandry, France. The house is popular across the world for its beautiful gardens. The property was purchased by Joachim Carvallo in the year 1906 and poured a huge amount of money and dedication in developing the beautiful garden. It is mainly known for its Renaissance gardens that includes water garden, ornamental flower gardens, and vegetable gardens. It has been developed in formal patterns in the shape of low box hedges. It is also listed as the World Heritage Site.

The palace of Schonbrunn is home to the Habsburg emperors during the 18th century till 1918. It was designed by the architects Johann Bernhard Fischer von Erlach and Nicolaus Pacassi and it is finest examples of the decorative art. The palace has a beautiful garden which is famous across the globe. It is outstanding and one of the well preserved Baroque ensembles of its kind in Europe. The fountains in the garden are both large and small and it can go upto the hill to the Gloriette.

Butchart Gardens is a beautiful group of floral display gardens located in the region of British Columbia, Canada near the Victoria on Vancouver Island. The garden is quite famous across the globe and receives approximately a million visitors each year. The garden was designed by Robert Pim Butchart and his wife Jennie Butchart. Initially, it was quarry owned by Robert Pim Butchart and later when the quarry closed in 1909, both the couple has decided to change it in a beautiful garden and now its a designated site of National Historic Site of Canada. There are many exotic birds like peacocks, ducks, and butterflies can be seen in a beautiful area.

Longwood Gardens is a beautiful botanical garden of the United States of America spread in a span of 1,077 acres in the region of Kennett Square, Pennsylvania, the United States in the Brandywine Creek Valley. This is one of the most popular horticultural display gardens in the country and open to the tourist throughout the year to enjoy the exotic plants, events and performances and even educational lectures and various kind of workshops.

Desert Botanical Garden is spread in a span of 140-acres near the central Arizona of the United States. One of the beautiful gardens was founded by the Arizona Cactus and Native Flora Society in the year 1937. The whole site was developed in 1939 and now it has approximately 50,000 plants out of which one third is native to the region and there are around 379 species which are critically threatened or endangered. The garden is equipped with well-paved walkways and enthusiastic volunteers who will ensure that you will get the overview of each and everything in the garden.

Royal Botanic Gardens also known as Kew Gardens has over 50,000 living plants can be seen across the beautiful garden. The UNESCO World Heritage site is managed by the National Trust property in Sussex which is also home to the internationally important Millennium Seed Bank and teh scientist work together with the partner organisation in more than 95 countries. The garden was initially designed by Princess Augusta in 1759 and later expanded by subsequent monarchs. It also has a glasshouse to grow tropical plants and a 59-foot high treetop walkway across the garden.

Claude Monet’s Garden has two parts a flower garden known as Clos Normand situated in front of the house and the second part is the Japanese inspired water garden which is on the other side of the road. The Clos Normand property was designed by the famous French Impressionist painter Claude Monet. The garden was well planned by diverting a nearby river to bring water to the garden ponds. The garden is simply stunning and it is one of the most famous gardens in France. Many paintings were painted by Monet by living in the village Giverny. This also includes water lily and Japanese bridge paintings.