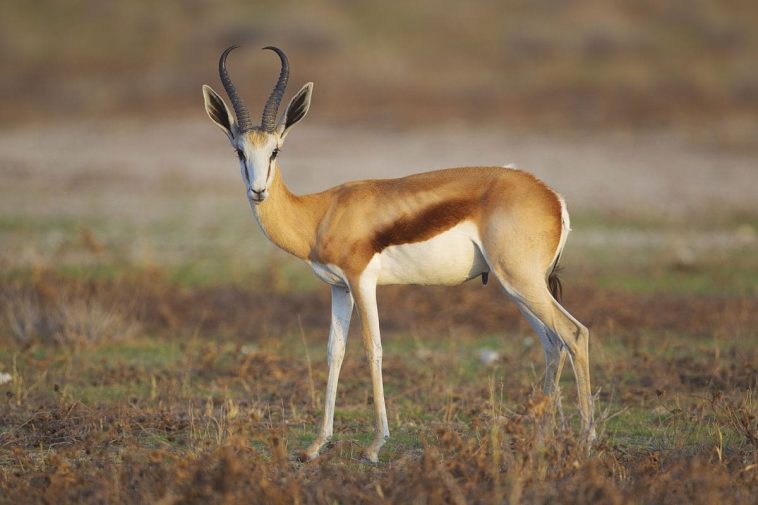 Horns and antlers are like the crown to members of the animal kingdom. Primarily they are used to fight away the predators, however, they also come to use when there is a battle to win over territory or attract the female counterpart. The long and beautifully structured horns not only provide them with a majestic aura but also enables them to present a replica of their power, dominance and sexual quotient. While many animals have horns and carry it with elegance, there are a few who stand out and catch all the eyeballs. Here is a list of top 10 beautifully horned animals whose beauty is a masterpiece.

Knowing or unknowingly, Caribou is known to all of us. And why not? After all, Christmas is everyone’s favourite and Santa Claus comes in a cart pulled by the Reindeers. Caribou and Reindeers belong to the same species and the mammal belongs to the family of deers. However, the only difference is their geographical difference. While Reindeers are native to northern Europe and Asia, Caribous are native to North America. According this website, Caribous are taller than the Reindeers. Herbivore in nature, they weigh 240 to 700 pounds and have an average life span of 15 years. Interestingly, Caribou is an exceptional deer to have antlers in both males and females.

The largest goat, Markhors have long spiral horns and they have certainly earned their name from their horns. In the Persian language, ‘Markhor’ means ‘snake’ and the prominent corkscrew-like spiral horn entirely represent the physical appearance of a snake. In males, the length of its horn reaches up to 63 inches and it reaches up to 9.8 inches in the case of females. They use their horns for food, to dig holes and attract females during mating season. An interesting thing is, one can know how old is a Markhor by seeing its horn.

The mountain ranges of North-Central Asia, Northern Africa, and
Europe are home to the wild goat Capra Ibex. But they are also found in snowy areas. Their back curving horns make them fall under the top 10 beautifully horned animals. The even-toed hoofed animal can jump up to 6 feet without starting to run. Herbivore in nature, Capra Ibex uses its horn to fight with its enemies. The males have horns that grow somewhere from 28 inches to 55 inches and in the case of females, it’s a little shorter and tends to be curved back further.

The second-largest mammal White Rhinos are also called square-lipped rhinos. 12-13 feet in length and up to 6 feet from hoof to shoulder, they are indeed huge. They live in a complex social structure. But that’s just one of the many interesting things about them. What makes them so unique is their beautiful horns. Their horns are made up of keratin. Along with that, the horns have calcium and melanin deposits in them. Their horns are like horse hooves. White Rhinos have two horns.

A subspecies group of wild sheep, Mouflon are highly adaptable animals. They are covered with a woolly coat that has uneven colors. The male Mouflons are smaller than females. But it is the males who have beautiful horns. Even though some females have it, not all of them come to the clan. They have long and rounded horns that grow rounder with age.

Also popular by the name of spear antelope, Oryxes are known for their strong horns. Made up of keratin, Oryxes have horns strong enough to even kill lions. Males, as well as females, have long and curved horns. They live in drylands, desert, and semi-deserts. The dry areas might be trouble while looking for food, the genus of antelope has successfully adapted to it.

Male moose grow massive antlers. And when we say massive, we mean almost 6 feet. One interesting this about these shovel-shaped antlers is that they are just used for fighting for a mate and sheds in winter every year. Male Moose are called bulls, and females are called cows. They are the largest member of the deer family and weigh up to 1200 pounds. And their antlers are equally heavy.

The longest horn a Blackbuck has ever had measures more than 28 inches. Native to grassy plains and a little bit forested area, Blackbucks are known as Indian antelope. Their long spiral horn is the most unique feature. The males weigh up to 154 pounds, however, the females are lighter. They have a life span of 10-15 years. They are the only antelope with distinctive colouration. Their horns curl up to 5 times, thus giving itself an amazing and eye-catching appearance.

Found in parts of Sahara, both male and female Addax have horns. Males
have horns that measure up to 120 centimetres, whereas it reaches up to 80 centimetres in females. Their horns have 2-3 spiral twists in them. Addaxes are also known as white antelopes and screwhorn antelopes. A group is led by a dominant male and has somewhere between 5-20 members in the clan. They are herbivorous.

Native to southern and western Africa, Springbok belongs to the bovid family. It is identified by its long pointed ears, reddish-brown hair on the back, white hair on the lateral sides of the body and dark brown horizontal line in the middle. But the most phenomenal thing is their horn. Both males and females have lyre-shaped horns. They are longer and thicker towards the base in males. They are more inwardly built. The males are called rams and the females are called ewes. This herbivore has predators like lion, cheetah, and leopard.

Highland Cattle is a Scottish cattle breed originated in the Scottish Highlands and the Outer Hebrides islands of Scotland and hence the name. It is one of the species with long horns and a long shaggy coat and has been bred to withstand the severe conditions of the region. It is believed that the Highland cattle descend from the Hamitic Longhorn and later brought to Britain by Neolithic farmers in the second millennium BC. The cattle were great importance to the economy but later cattle being raised for meat primarily and sold in England.

Bongo is an antelope species that belongs to the bovid family. There are two species of Bongo namely lowland (western) and mountain (eastern). Bongos are mostly seen in the lowland forests, bamboo thickets and tropical jungles. Bong are critically endangered because of Habitat loss, diseases and hunting. The species can reach 5.5 to 8.25 feet in length and 330 to 890 pounds of weight. Male species are larger than female species. The lifespan of species is 10 to 18 years in the wild and up to 19 years in the captivity.

Saiga antelope are also known as Saiga is one of the critically endangered antelope mostly seen in the foothills of the Carpathian Mountains in the northwest and Caucasus in the southwest into Mongolia in the northeast and Dzungaria in the southeast. Scientifically known as Saiga tatarica the species belongs to the family Bovidae. The adult can grow upto 38 kg and the species is listed as critically endangered.

Manx Loaghtan is one of the rare species of sheep popular as beautifully horned animals. It is also known as Loaghtyn or Loghtan with an appearance of dark brown wool and usually four or occasionally six horns. The species is mostly seen in Scotland, the Hebrides, and the Shetland Islands. According to the Rare Breeds Survival Trust, the species is listed at risk. It is characterized as a small sheep with no wool on their dark brown faces and legs.

Texas Longhorn is a breed of cattle which is popular as beautiful horned animals that can be extended upto 70 inches (1.8 m) tip to tip for bulls. It was discovered by explorer Christopher Columbus and the Spanish colonists. The longest recorded horned was 129.5 inches (3.29 m)of longhorn M Arrow Cha-Ching. Because of intelligence, Texas Longhorns are increasingly being trained for steer riding.

Hebridean sheep is a small black sheep from Scotland popular as beautiful horned animals. The species is very similar too other members of the Northern European short-tailed sheep group, however, it has a short and triangular shape. Initially, they are known as “St Kilda” sheep and have two pairs of horns.

All these beautifully horned animals are magnificent and pride in the wild. But sadly many of them are on the verge of being endangered or are already critically endangered. We need to be careful of the scenario and protect their habitat to safeguard the ecosystem and create perfect harmony.