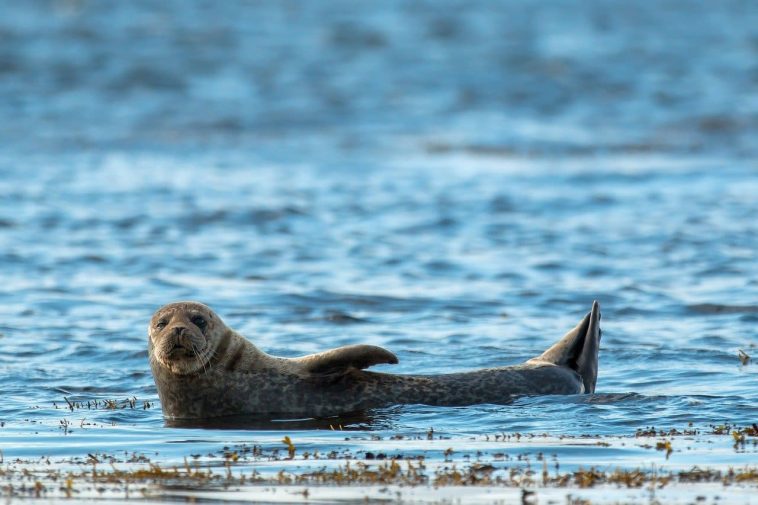 Aquatic animals spend almost all parts of their lives in the water. They either live in freshwater or saltwater and can cover a vast variety of creatures, ranging from fish, molluscs, mammals and even the crustaceans. Most of these animals are gifted with special skills by nature to help them adapt to their water surroundings. Some of them can survive on land as well, like crabs and lobsters. During our lives, we may or may not come across these wonderful marvels of nature. Let us explore these beautiful and unique aquatic animals that make us wonder at the intricacies of nature.

A sailfish lives in the warm and temperate parts of the world’s oceans. They are blue to grey and can be from 5 to 11 ft in length. Their name comes from their unique dorsal fin known as a sail, which stretches across their entire length of the back. their lower jaw and forms a distinctive spear, and can be as sharp as a spear. They are the fastest fish in the ocean, with speeds up to 68 miles per hour. Under attack situations, sailfish skin can flash iridescent colors.

Sea turtles are large, majestic reptiles that thrive in the tropical and subtropical seas throughout the world. Sea turtles do not have teeth, but their jaws are adapted for hunting. They are excellent swimmers and strong divers, and some of them may reach depths of more than 1,190 m searching for jellyfish for prey. They come in various varieties like Hawksbill Turtles, Leatherback, Loggerhead, and the Oliver Ridley types.

Mantis shrimps, or stomatopods, are marine crustaceans.  They live in warm, shallow water and grows to 6-12 inches in length. This animal comes in gorgeous colors, with an unparalleled vision. Some of the species have eyes that contain 12 photoreceptors each that allow them to sense different types of colour. Mantis shrimp are capable of seeing polarized light. They are known to deliver powerful punches and can be quite deadly. Some species have specialized calcified “clubs” that can strike with great power, while others have sharp forelimbs used to capture prey.

The humpback whale is a species of baleen whale. They can be up to 16 m in length and weigh around 25–30 metric tons. The humpback whales have dark backs, and light bellies, long pectoral fins, and a small hump in front of their dorsal fin, from which they get their name. The whales have a unique song system, which is a type of vocal communication that they use. This sound can travel for great distances through the oceans. Humpbacks migrate annually from the poles to warmer winter breeding waters closer to the Equator. Humpbacks are powerful swimmers.

They have soft umbrella-like bodies and long, stinging, poisonous tentacles with millions of very small stinging cells in their tentacles called nematocysts. These cells are used to capture food by injecting a toxin into the prey. About 5% per cent of jellyfish bodies are made of structural proteins while the remaining 95% is made up of water. Some jellyfish are clear, but others are vibrant colors of pink, yellow, blue and purple. Some jellyfish can produce their light and become luminescent.

Cuttlefish or cuttles are marine molluscs who belong to the family of squids and, octopuses. Cuttlefish are the chameleon of the sea because they can change their skin colour, owing to the presence of chromatophores. They are found in the Mediterranean, and North and Baltic Seas. These intelligent animals have a ring of arms surrounding their heads. When threatened, cuttlefish may release an ink, called sepia, in a cloud to confuse the predators and allows the cuttlefish to run away.

Seahorses prefer to swim in pairs with their tails linked together. They swim upright and avoid predators by changing their body colour to the colour of underwater plants. They generally thrive in coral reefs, mangroves, and seagrass beds. They have excellent eyesight and their eyes function independently, such that a sea-horse can see both forwards and backward at the same time. They also can change their colour to match their surroundings.

Crabs come in all different shapes and sizes. The Giant Crabs or the Japanese Spider Crab, are the largest known species of crab. They have a long lifespan and can live up to 100 years. This crab has the greatest leg span of any arthropod, reaching 3.8 meters from claw to claw. It can be found in the Pacific sea near Japan. They have huge, muscular claws to hunt down prey and can be deadly.

Starfish or sea stars are star-shaped aquatic creatures that can thrive in all the world’s oceans, from the tropics to frigid polar waters. They have a central disc-like body and five arms, though some species have a larger number of arms. The starfish have eyes at the end of each arm. They come in various colors and move using hundreds of tube feet. Amazingly, the starfish can regenerate lost arms, which is useful if the sea star is injured by a predator.

Corals are marine invertebrates and are made up of thousands of tiny animals called polyps. Each polyp has a saclike body and stinging tentacles coming out of its mouth. Coral has a dazzling array of shapes and colors, and are found all over the world’s oceans, from the coast of Alaska to the warm tropical waters. Coral Reefs, like the Great Barrier Reef in Australia, are formed of colonies of coral polyps held together by calcium carbonate. Some species of corals do not get involved in reef-building, and are known as “soft” corals.

People generally confuse with Sea Lion and Seals. Both of them are totally different animals like seal lions have external ear flaps and they can even walk on land using all four flippers. Sea lions have a good speed and they can swim at a speed of 25 miles per hour. The average lifespan of sea lions is 20 years but there are some who have been recorded to live till 30 years. The age can be calculated by calculating the growth layers in the teeth similar to the rings in the tree trunk. They love to eat a different kind of fish such as anchovies, herring salmon and sardines. Sea lions predators include Great white, hammerhead, blue sharks and orcas.

Lobster belongs to the family Nephropidae also known as Hominidae. Talking about the appearance, they have long bodies with muscular tails and mostly live in crevices or burrows on the seafloor. Out of five pair of legs, 3 of them have claws. Lobsters are invertebrates with a hard protective exoskeleton. The species has blue blood because of the presence of hemocyanin, which contains copper. The average lifespan of lobster into the wild is 45 to 50 years in the wild. It can be seen in all oceans, rocky and sandy areas on the edge of the continental shelf itself.

It is one of the most interesting aquatic animals whose name is derived from the Greek language which means eight footed. Currently, 200 species of octopus are known and they can be seen in all oceans of the world. Octopus are invertebrates which means they are boneless and that is the reason the species can lose its shape when it is pulled out of the water. The head of the octopus is known as mantle which is surrounded by 8 arms known as tentacles. The colour and size depend on the type of environment and those who live in colder regions are larger than the tropical regions. The average lifespan of the species is unknown they can live from a few months to a few years, depending on the species.

One of the aquatic animals, Rays are kind of cartilaginous fishes which are related to sharks and belongs to the class os family Chondrichthyes. There are approximately 534 species os rays are known in the oceans across the world. Rays are different from sharks in the sense of flattened, disklike body, with the five-gill openings and the mouth generally located on the underside. The species can be seen in all oceans in the world, however, most of them are slow-moving bottom dwellers. One of the species Manta rays feeds on plankton and small animal and others on various fishes and invertebrates.

Seals can be defined as a group of marine mammals that are visible in all regions of the world. The species is divided two-family, In the first one, we have seals with ears, like a sea lion, and others that include earless seals, like a common seal. Currently, we have 33 species of seals are known in the oceans and most of them spent their entire life in water, however, after giving birth they take care of babies on the shore. The average lifespan of the species is 30 years.

Walrus is one of the aquatic animals that belong to the family pinniped family which includes different types of flippered marine mammals. As of now, there are two species of walrus is known as the north Pacific walruses and the north Atlantic walrus. Both of them are mostly seen in the northern parts of Siberia, in Svalbard, Northern parts of Atlantic, in the eastern parts of Hudson Bay and Arctic Archipelago of Canada. Some of them are also visible in eastern and western parts of Greenland and in northern Labrador. The weight of adult walruses is around 2000 and 3000 pounds in weight and can reach upto 12 feet in length.