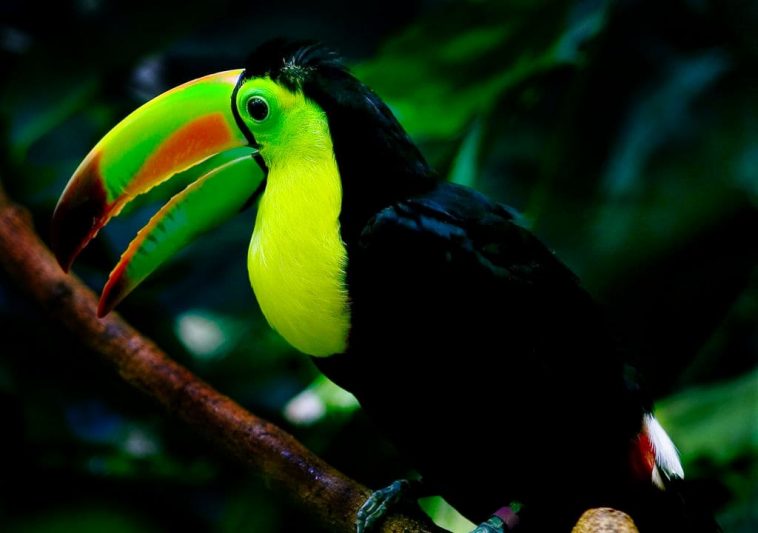 It is said that the element of beauty lies in the eyes of the beholder. However, when the beholder itself to subjected to myriad forms of beauty, it becomes all the more gorgeous. The same thing happens in nature when we explore varieties of animals, birds, and insects. All animals that are part of the mystic animal kingdom are beautiful. Nature has bestowed animals with majestic plumages, glossy furs, and vibrantly colored feathers. Some of the insects and marine animals have the combinations and the patterns in the most beautiful colors of the rainbow. Birds and beetles have iridescent shiny wings that further add a dash of beauty to their appeal. Below we present a list dedicated to the appreciation of the beauty of the 10 best looking animals.

Soaring above the canopy of the Amazon rainforests in South Central America, the Scarlet Macaws are the most flashy and colorfully vibrant species of parrots. These large birds have the most beautiful combination of bright red, yellow, and blue feathers that make them widely desired as most beautiful pets by bird lovers. These birds are mostly vivid red with bright yellow and blue edges on their large wings. These intelligent birds are a combination of beauty with brains and are always full of energy. It is one of the beautiful birds of Brazil.

Because of its vibrant colors, the Keel-billed Toucan is also known as the Rainbow-billed Toucan. This national bird of Belize is a large and colourful bird with black plumage, and a bright yellow throat and cheeks. Its tail feathers are a vibrant red and it has a yellow-green face. Its oversized bill is another centre of attraction and it seems that all colors of the rainbow get splashed on the it-light green, orange and tipped with red and blue. It is one of the most popular birds in the world.

The graceful beauty of swans is beyond words and one of the best waterfowl birds. The swan symbolizes grace and beauty and is associated with love, music, and poetry. In Roman mythology, Swans were considered close to Venus, the goddess of love. Their elongated, curved necks and white feathers stand out amongst the lakes they reside on. You can imagine a swan is a huge snow-white bird with its long white neck, a soft rounded head, and a handsome beak. Swans gliding in serene water are a beautiful sight to behold. It is also one of the most graceful animals in the world.

Another gem from the casket of beautiful birds, the peacock is the national bird of India. They are considered as most beautiful and colourful birds in the world. They are known for their iridescent tails. The peacock’s tail contains spectacular beauty in the whole world with large feathers in bright, iridescent colors and intricate patterns.  A magnificent ‘fan formation’ of feathers occurs when a peacock displays his tail feathers during courtship. A dancing peacock is the most beautiful sight in the animal kingdom.

Birds are not the only beautiful creatures on this planet. There are some animals as well, who top the beauty charts and the White Bengal Tiger is one of them. The White Tiger is the white form of the Bengal tiger, which is found in the Indian states of Madhya Pradesh, Assam, West Bengal, and Bihar. White Bengal tigers have pink noses, white-to-crème coloured fur, and black, grey or chocolate-coloured stripes. Their eyes may be blue, or green or amber. With such magnificent beauty, these tigers are among the rare species in the world.

The Arctic fox, also known as the Polar fox, is a small fox native to the Arctic regions. It is commonly found throughout the Arctic tundra and popular as one of the fluffiest animals in the world. Arctic foxes have beautiful white and, sometimes even blue-grey coats. They act as a very effective winter camouflage. The natural hues of the animal fur allow them to blend into the tundra’s massive ice. When the seasons change, the fox’s coat turns a brown or gray color.

This sturdy horse breed from Friesland, Netherland has some of the most graceful, loyal, and cheerful horses. They have powerful, sloping shoulders, and compact, muscular bodies with a glossy black coat. A Friesian horse also has a long, thick mane and tail that are special on their own. Their manes are often wavy with long, silky hair like curly tresses. They are the “Black Beauties” in real life.

One of the best looking animals, The Mandarin fish, also known as the Mandarin dragonet, is a small, brightly-coloured member of the dragonet family. It is native to the Pacific and is undoubtedly the most beautiful fish in the ocean.  It looks like an intricate painting with its entire body made up of wavy alternating lines of orange, blue and green. The mandarin fish contains two types of secretory cells in its colourful epidermis. It produces ‘cyanophores’, which are blue pigmented, light-reflecting cells that give its vibrant coloring.

The Panther chameleon is a unique and colourful species of chameleon found in the eastern and northern parts of Madagascar. They are renowned for their dazzling colors, which range from bright blue, orange, red, and green. They have a wide variety of spots, stripes, and patterns on their base colour display. Panthers exhibit colour change as a method of communication, or heat exchange, and to camouflage as well. These reptiles make popular exotic pets because they are usually docile.

Another beauty from the exotic island of Madagascar, the Sunset Moth stands out because of the unique, colorful wing patterns. The iridescence of the sunset moth’s wings is what causes it to look so vibrant. In darker light, the moth appears dull, but when viewed in bright light, its wings display flaming beauty. Reflection of light from its wings reveals bright reds, oranges, and greens in appealing patterns.

These are some of the most beautiful and best looking animals from the animal world.