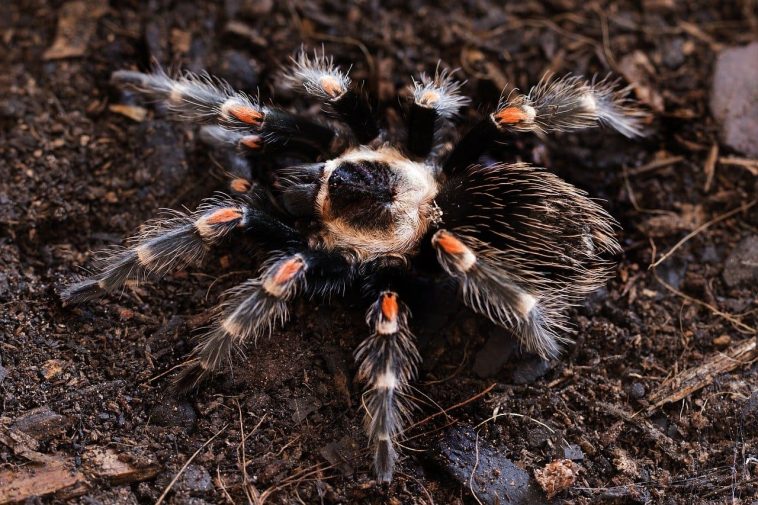 Tarantula breeds are hairy spiders that belong to the family Theraphosidae. At present, about 1,000 species have been identified. They are nighttime hunters who will pounce on their prey. They eat insects, beetles, and grasshoppers. These spiders have been around for millions of years. Tarantulas are found in the rainforests of South and Central America, in Africa and the southern part of North America.  Many Tarantulas live in burrows underground and are available in the most beautiful natural colors. Let us discuss some of the best-looking tarantula breeds

Many varieties of tarantulas have been identified for their beauty. These spiders have been kept as pets. It is said that the more one holds a tarantula, the more comfortable it becomes with humans. Annual competitions to judge the prettiest tarantula are held. One such prestigious event is the annual exhibition of the British Tarantula Society. The judges look for the perfect tarantula with a glistening coat, correct proportions, colors, stance, and perfectly poised legs. With so much being looked into, below we discuss the best looking Tarantula breeds that can leave you awestruck.

The Socotra Island Baboon Tarantula (Monocentropus Balfour) is an absolutely stunning old-world tarantula. They are native to the island of Socotra, off the coast of Africa. It has got a spectacular look. Its legs are generally a striking electric blue and the body is a unique sandy coloured body. The body is covered with light-coloured hair that gives it a satin-soft feel.

The Ivory-billed Ornamental Tarantula or the Poecilotheria subfusca, is an arboreal tarantula. It is native to Sri Lanka and it is one of the largest Poecilotheria recorded from Sri Lanka. It is well-equipped with distinctive colors and patterns. The female has a light carapace with blue or purple legs, except the first leg segment which is a light cream colour along with her lower body and abdomen. The male has a darker carapace with dark blue, pitch-black legs and dark abdomen.

The Singapore blue is a large, arboreal species of tarantula from Malaysia and Singapore. These spiders can grow up to 9 inches across. The legs are an intense blue with a brown or gold underbody colour. The male spiders are not as vibrant. It is a true long-legged exotic beauty. The female spiders are of a striking blue colour with a dark-coloured abdomen. The males of this species are not of vibrant colour. After reaching adulthood, their colour will change from blue to green or yellow, or a mixture of both.

The eye-catching cobalt blue tarantula (Haplopelma lividum) is a radiant blue Tarantula found in South East Asia. It has a rich, almost metallic blue colour most typically adorning the legs but sometimes covering the entire body. This spider’s body exhibits a range of blue shades, with the colour dulling toward the tips. Some nature researchers believe that their blue colour helps them to survive in their environment.

The Green Bottle Blue Tarantula is a native of the Paraguaná Peninsula, Venezuela. It is known for the most dramatic coloring of any spider species. They have bright blue legs, with a blue-green carapace. Their orange abdomen gives them an additional colour touch. They have an average lifespan of 8 to 22 years. They originate from a very harsh and dry climate from the desert areas of northern Venezuela, Paraguana, Their vibrant and vivid colors make them hard to miss.

This species is also known as the Martinique Red Tree Tarantula. It is popular as a spider pet because of its gentle nature and unique colors and appearance. It is native to Martinique in the Caribbean Sea. Young tarantulas are of a metallic steel blue-black colour. As they grow into adults, they develop a metallic green carapace and the abdomen is covered with red hairs. The long furry legs become covered in reds, pinks, and brown hair.

The Mexican Flame Knee, or the Brachypelma Auratam is tarantula native to the Guerrero and Michoacan regions of Mexico. It is mainly a solitary animal and lives in dry areas. It has relatively darker and discrete red stripes along the carapace. They make docile pets. The male Mexican Flame Knee spider has a lifespan of 4 to 5 years, while females can live up to 15 years.

8. Gooty Sapphire Ornamental or the Metallica

Poecilotheria Metallica, also known as the Gooty Sapphire Ornamental, is an Old World species of tarantula. It is of beautiful blue colour with an intricate fractal-like pattern on the abdomen. It is a stunning bird spider due to its colouration and pattern from Gooty, Southeast India. This species is venomous and can cause painful bites when attacked or threatened.

The Venezuelan SunTiger tarantula is an arboreal species that is a native of Venezuela, Guyana, and Brazil. It is a favourite due to its vibrant black colour with orange chevron marks on its legs. Its abdomen has an orange tiger-stripe design which gives it the name. The female spiders are brighter in colors than the male ones, which have slightly faded colouration.

The Mexican Golden Red Rump tarantula or the Amula Red Rump tarantula is another beautifully coloured tarantula species native to the central highlands of Mexico.  The carapace of the spider body is a light golden colour and the abdomen is dark, covered with long red hair. Its apparent colour depends on the illumination, varying from sandy grey through to rose or yellow. Females live for about 15 years while males live for about 5 years.

These are the best looking Tarantula breeds. They are not only alluring because of their unique natural colouration but some of them also make quiet pets.