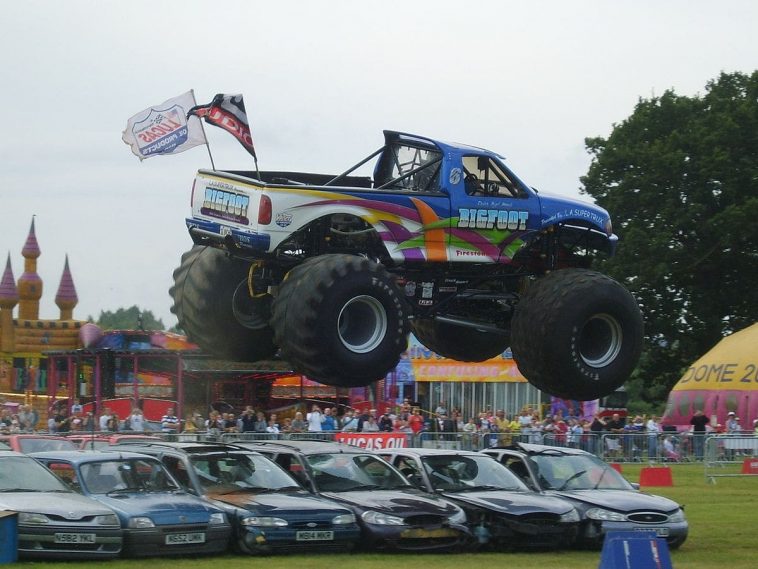 Monster jam trucks has always remained a source of ultimate pleasure and enjoyment. Indeed, there is a large number of monster jam trucks which are made to thrill and cherish one’s life. These monster trucks are actually specialized truck with heavy duty-suspension, four-wheel steering, and oversized tires constructed for competition and entertainment purpose. These monster jam trucks offer a true sense of adventure coupled with thrill driving. Ranging from Monster Mutt, Grave Digger to Blue Thunder and many more, there is a never-ending list of monster trucks. Also, Monster Jam Trucks are well-known for their level of competition, championships and also for entertainment purpose for their fans and officials. So, here is a list of 10 Best Monster Jam Trucks that one fan finds to have fantastic experiences.

Manufactured by original driver Dennis Anderson, Grave Digger is one of the most well known and famous monster trucks of all time. Also, it is one of the most decorated Monster Jam trucks in the whole world. It is manufacturer Anderson and it has won four Monster Jam  World Finals championships and has also got freestyle title in 2010 and also 200 racing titles in 2004 and 2006.

Also known as  “Max-D”, Maximum Destruction is a monster truck owned by Tom Meents. It is one of the most striking Monster Jam Truck on the Monster Jam circuit. It features an orange and silver paint job coupled with a low-to-ground, and also aerodynamic body style. Also, it is considered as one of the fastest machines in the field of sports. Its driver Tom Meents has won not less than six times in the Monster Jam World Racing Champion.

Owned by FELD Entertainment, El Toro Loco has been run by many teams. El Toro Loco is a monster truck which is recently racing in the Monster Jam Series. It is undoubtedly, one of the most popular monster trucks with unique features as compared to other trucks. Moreover,  it has been competing in each and every Monster Jam World Finals since 2003 and has become main in the European tour since 2005.

Blue Thunder is a monster truck that races in the USHRA Jam Series which is a Truck division of Ford Motor Company. Originally sponsored by Live Nation, Blue Thunder has few similarities with monster truck Bigfoot. According to some of the fans, they saw Blue Thunder as a replacement for Bigfoot, but for others, this is not the case. However, it has been quite successful and also won some major events during its lifetime.

Monster Mutt is a monster truck from West Chicago, Illinois, and has been competing since 2003 in the United States Hot Rod Association Monster Jam Series. It has been originally styled and later on a customized after a 1950 Mercury. Now, it has a canine motif, which is completed with tongue, tail and big ears. It is painted with a dog mouth which is drawn in the front with two shades of Brown.

Bigfoot is a monster truck, which was originally manufactured in 1974 as  Ford F-250 pickup. Later on, it came with some changes made by its owner Bob Chandler at the beginning of 1975. By the year 1979, the modification was so advanced, that it came to be known as a first monster truck. At present, there are 5 competing Bigfoot trucks along with 6 full-time drivers and also 2 fillings. Also, the team has made 20 trucks since 1975.

Captain`s Curse was a monster truck, made by Monster Jam and Feld Motorsports. Captain’s cruise has also taken part in the Monster Jam series from 2007 to 2016. Styled By Willys pickup after  1941. It also featured a red-and-black pirate-themed paint scheme, which was meant to replace the Blacksmith monster truck.

Sudden Impact is a monster truck, recently racing in the USHRA Monster Jam series. Originally, driven by John  Season it is one of the most famous and well-known trucks that has been to four world finals under Seasock’s command. Also, it is among the first monster truck to implement a driveline blanket, which is made of Kevlar that goes around the outside of the driveshaft loop to make sure that in any case the driveshaft breaks, the parts will not fly off the truck, which could injure the fans and officials.

Tropical Thunder is a Chevy Silverado monster truck, owned by Wayne Smozanek. Tropical Thunder has undergone many changes since its establishment. In 2006,  the truck was bought by Dan Rodoni and in 2016, Tony Canedo bought and converted it into Enforcer. It is a fantastic monster truck that has won many championships.  Also, in 2019 the truck has competed in the Monster Truck Masters tour.

Bounty Hunter is a Ford Expedition truck, owned and driven by Jimmy Creten since 2002. Bounty Hunter has taken part in all the Monster Jam World Finals under Creten and also Double Down Showdown under Austin Minton. Furthermore, since 1996 Bounty Hunter has been Defeating its competitors, especially when Jimmy Creten took a decision to buy his very own Monster Jam truck. It is worth mentioning that with years of experience as an engineer and a robotics degree behind him, Creten was ready to give Bounty Hunter a competitive edge that came as a result in Championship.

So, these are some of the best monster jam trucks that one can find to have thrilling and adventurous experiences. These trucks not only offers a fantastic ride but also offers a true sense of pleasure to its lovers and enthusiasts who not only constitute its drivers but also fans and officials.