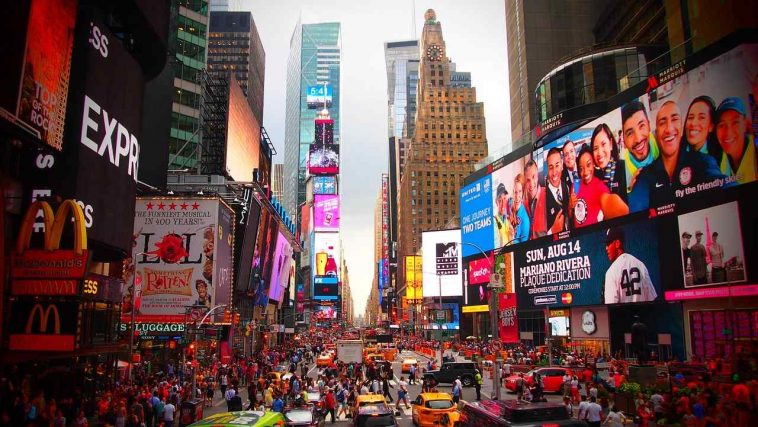 The New York City or the “City that never sleeps” is the largest and most populated city in the USA. The metropolis is a mega-hub for culture, art, architecture, history, and entertainment, and it is constantly buzzing with activity. The city also houses Manhattan, which is among the world’s major commercial, financial and cultural centres. The iconic city includes skyscrapers such as the Empire State Building and the sprawling Central Park. As we go through the hustling New York City, here are the top 10 best places to visit in New York. These highlights of New York City will help you cherish some great memories of the city.

This is a massive 46 m tall sculpture on Liberty Island in New York Harbor on the Liberty Island. This copper statue was a gift from the people of France to the people of the United States. It was designed by French sculptor Frédéric Auguste Bartholdi built by Gustav Eiffel.  There are several plaques and tablets near the Statue of Liberty. You can take a ferry to Liberty Island. No charge is made for the entrance to the national monument. On the way to the Statue of Liberty, you can even stop at Ellis Island and explore the Immigration Museum. This museum is located in the historic immigration complex.

Central Park is an urban park in Manhattan, New York City, located between the Upper West Side and the Upper East Side. Covering around a massive 840 acres, this is the city’s first urban, landscaped park. Hear a new band at Summer Stage, or catch one of your favourite world-famous acts perform at Rumsey Playfield.  You can have a boat ride across the Central Park Lake, or opt for a more relaxing gondola ride. You can even spend time playing beach volleyball near Sheep Meadow. You can plan to visit the Belvedere Castle, Strawberry Fields, the Central Park Zoo, and also the Conservatory Garden, for its brilliant rose blooms.

This is the most famous and buzzing place to visit in New York, especially in the evenings. It is lined with huge, brilliantly lit billboards and screens, and is the world-famous centre for New York’s New Year’s Eve Celebrations and the famous “ball drop” at midnight. The square with the surrounding streets is filled with people and eateries. The Broadway Theater is staged in the neon-lit Times Square.

4. Broadway and the Theater District

Broadway Theater comprises of a large number of theatre venues in the Theater District along the streets of Broadway. These theatrical performances are presented in the 41 professional theatres, each with 500 or more seats. This is the place to see the latest shows and long-running classics. Shubert Alley is a famous pedestrian-only alley in the Theater District and home to two well-known playhouses, the Shubert and the Booth.

The Metropolitan Museum of Art or the Met is the largest museum of the United States and among the most popular in the world. It was made in 1870 and is home to the world’s finest art collections. The museum has three sites, and its centrepiece is the Met Fifth Avenue, which has major collections of American decorative arts, costumes, Egyptian art, musical instruments, photographs, arms, and armour. The museum showcases the work from the prehistoric times to the very recent times from every part of the world.

6. Empire State Building or Top of the Rock

One of the best places to visit in New York , the Empire State Building is a splendid 102-story skyscraper located in Midtown Manhattan. It immediately became a landmark and a symbol for New York City when it opened in 1931. There are two observation decks – one on the 86th story and the other on the 102nd story. Both offer a breath-taking view of the city. You can see up to 80 miles, across the skyline to the neighboring states of New Jersey, Pennsylvania, Connecticut, and Massachusetts, on clear days.

The Brooklyn Bridge is an ancient and the longest suspension bridge in the USA. The magnificent bridge has beautiful arches and suspension cables, and its pillars are made of limestone, granite, and cement. It spans the East River and connects Manhattan and Brooklyn. The Brooklyn Bridge is well lit up at night and presents a glamorous sight. From the bridge are beautiful views of the Statue of Liberty over Manhattan, and the East River. These views can be enjoyed either by biking over the bridge or by taking a walk.

The 9/11 Memorial Museum and the memorial are located on Greenwich Street, on the south side of One World Trade Center. It is known as the National September 11 Memorial and incorporates the old structures within the magnificent new museum building. The area is a moving tribute to the almost 3,000 people killed in the attacks on September 11, 2001.  It is located in a grand curved glass building, between two square pools. It features artefacts, photos, and videos, presenting the story of 9/11, its consequences and its impacts.

This observatory is at the top of the newly constructed One World Trade Center building. This has become the tallest building in the Western Hemisphere. This glass building is a unique structure on the Manhattan skyline and can be seen from all over the city. You can admire the incredible views over New York from the One World observation deck 1,776 feet above, on floors 100, 101, and 102.

This is a world-famous and huge entertainment and shopping complex in the middle of Manhattan. The 70-story 30 Rockefeller Plaza skyscraper offers awesome views over Manhattan from the famous Top of the Rock Observation Deck. The bronze sculpture of Atlas in front of the International Building is another point of attraction here. You can visit the indoor and outdoor viewing spaces that offer spectacular views. You can even enjoy skating on the outdoor skating rink at the base of the tower. It is one of the best places to visit in New York.

These are the 10 best places to visit in New York. Kindly share and do post your comments.