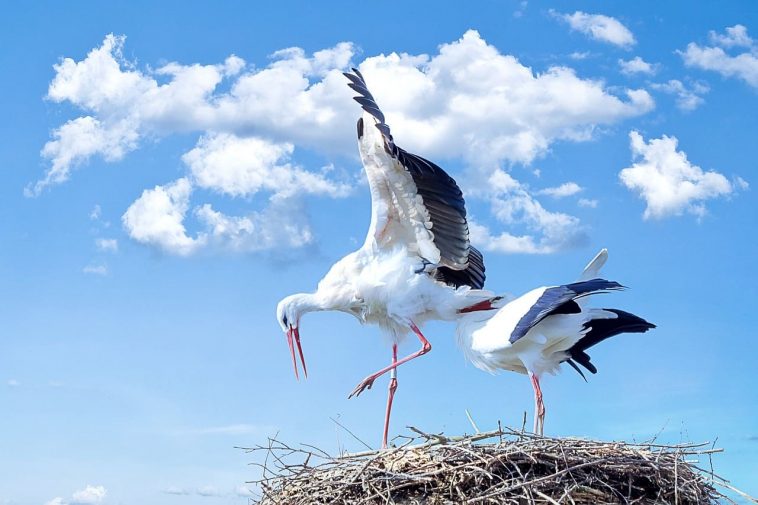 Birds are the most wide-spread living species that exist across all kinds of habitats. There are over 170 species of waterfowl, among them the ducks, geese, and swans. Water fowls are a large and diverse group of birds on the planet. They inhabit every continent except Antarctica. Most are found in freshwater sources such as rivers, lakes, dams, and wetlands. However, there are many sea and shorebirds as well. Waterbirds include ducks, geese, swans, pelicans, cormorants, herons, ibises, spoonbills and cranes, moorhens and several waders as well.  They can be found just about everywhere there is water, from the High Arctic to the tropics and from the ocean to the desert. Read below to explore the beautiful world of waterfowl birds and their habits and what makes them unique in the bird kingdom.

The herons are the long-legged freshwater and coastal birds. More than 60 species of these herons exist all over the world, in pools, marshes, and swamps where these birds dwell. The American Bittern and the egrets also fall under this category of birds. Herons are distinguished by long, S-shaped neck, long legs, and a sharp bill. Depending on the species, the colour of the plumage can be grey, white, brown or black. Herons mainly eat fish, frogs, small mammals and birds, reptiles and insects. They are good flyers and have a good vision.

The ibises inhabit the wetlands, forests, and plains of Australia. They are a group of long-legged wading birds. The Ibis has a long neck with a large, down-curved, pointed bill. Its long legs have partially webbed feet. They are active during the day and are omnivore i.e. they feed both on plants and meat. The Ibis has been associated with Thoth the God of wisdom and writing. The Scarlet Ibis is one of the most beautiful birds of all the ibis species.

There are 6 species of spoonbill in the world. They are found around saltwater lakes and estuaries. Most species have white plumage, sometimes with a rosy tinge. Roseate Spoonbill is the unique one with pink plumage. They feed around the clock, walking slowly through the water. These types of birds have slowly swept their partly-open spoon-shaped beaks from side to side through the water in search of water insects, fish, and molluscs. They sweep their open bills through the water, and when a fish or insect comes, they close their bills.

Storks are long-legged and long-necked tropical water birds. There are 19 known species of the storks, and the Marabou Stork is the largest species, with heights up to 5 feet. Storks have a graceful appearance with tall, slender legs, colourful plumages, and coloured bills. They appear very beautiful in flight. They fly soaring in the air with long, broad wings that only flap occasionally. Many storks are migratory birds and fly in groups of thousands while migrating.

One of the best waterfowl birds, Moorhen is also known as “swamp chicken”. Moorhens are black, with a red and yellow beak and long, green legs. Their wings are dark brown and they have a bluish-black belly, with white stripes. These birds are omnivores and they feed upon insects, spiders, snails, worms, fish, fruit, berries and seed. Moorhens are social birds and can be found in freshwater ponds, marshes, and parks. Some moorhens have been known to fly great distances, and they migrate south during the winter.

Geese are great farm birds. They are friendly and dedicated to their owners. They form lifelong bonds with their partners. The goose is considered to be one of the most intelligent birds. It does not forget people and animals and has a good memory and. Due to their size, they can’t easily hide when threatened. So they use aggression to ward off danger. They fly in the popular “V” formation in the sky. It is one of the best waterfowl birds in the world.

Swans are beautiful and graceful birds and are the largest members of the duck and goose family. They are large white birds with elongated, curved necks with white feathers and one of the best looking animals in the world. Black swans can be found in Australia. These elegant birds are monogamous in nature and mate for life. If their partner dies, they could die of heartbreak. These birds are highly intelligent and have a sharp vision and sense of hearing.

The Whistler family of birds includes whistlers and shrike thrushes. They are found in Australasia. They live in wooded areas and their diet consists mainly of insects. They are small stout birds with strong bills. They are small birds with a large head, short bill and a narrow, long tail with a forked tip. The adult male Golden Whistler has a bright yellow inner body, olive-green on the upper back and wings, and a blackhead and a bright yellow collar. Their name is derived from the fact that Goldeneye Whistler’s rapidly beating wings produce a whistling sound that can be heard half-mile away.

The mallard is the most common species of dabbling ducks found across the temperate and subtropical regions of the world. Only the male mallards have beautiful green head feathers, a white “collar” on the neck and dark brown breast. Ducks may waddle along slowly, but they can fly pretty fast. They have yellow or orange bills. Mallards can fly nearly vertical if needed. Migrating mallards can fly at high speeds at about 55 miles per hour.

One of the best waterfowl birds, Flamingos are beautiful wading birds with red and pink colour feathers. In positions of rest, flamingos stand on one leg. These birds live in shallow lakes, and mangrove swamps of Africa, Asia, America, and Europe. These birds can be up to 4.3 ft tall and have a wingspan that can range from 3 to 5 feet. During migration, they can fly up to 37 miles per hour. They are known to travel distance of over 300 miles to reach their new habitat. They have a strong sense of weather and rain. It is also one of the most popular birds in the world.

These are some of the beautiful and unique waterfowls birds that inhabit various corners of the world and add a dash of beauty to their habitats.