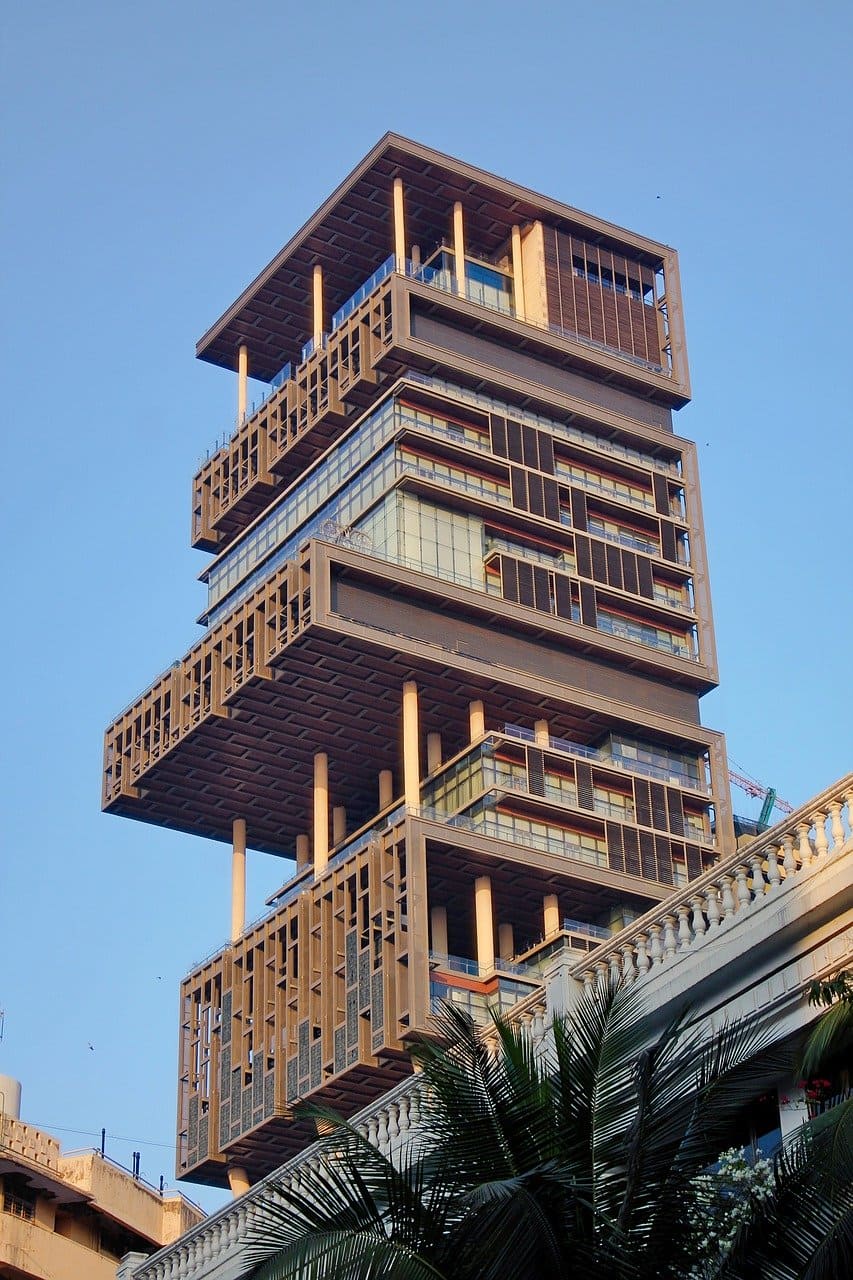 Across several parts of the world, possession of a house is seen as a privilege. A house is also a place of refuge, comfort and love but also a medium to express oneself. So it will come as no surprise that the rich have built very large homes to project their status and wealth in society and also perhaps as a way to leave an indelible mark in the world. People often shift their entire businesses and their household stuff using high-end movers like fairpricemovers.com just to be in a neighborhood where they can network with the rich and the powerful.

Large houses of rich people also serve as a monument of their legacy and for people to remember their achievements. Here is a compilation of a list of the largest houses in the world.

Biggest Houses in the World

Antilia is the largest house in the world in terms of area. It covers an area of 400,000 sq ft. It is located in Mumbai and is owned by Mukesh Ambani who is the richest man in India. It is valued at Rs 2 billion and is the world’s most expensive private residence. It is in the shape of a skyscraper with 27 floors and has various amenities such as three helipads,  a garage that is capable of accomodating 168 cars, a ballroom, an 80 seat theatre, terrace gardens, etc. Upon its completion, it received criticism both for its ostentatious design which was ridiculed by the architectural outlets, as well as for its flagrant display of wealth in the midst of immense poverty.

The house is named after an a mythical island in the Atlantic Ocean. It needs 600 staff members that help maintain one of the biggest houses in the world.

Bitlmore Estate was constructed in 1895 in North Carolina, USA by George Vanderbilt II, a member of the prominent Vanderbilt family. It is a popular tourist attraction and is a notable example of the Gilded Age architecture, a period when the American elite amassed a large fortune and constructed palatial houses models after their European counterparts. It is built in the Chateauesque style and covers an area of 178,926 square feet.The house is still owned and operated under George Vanderbilt’s mission and since 1895 it has welcomed guests from across the world to experience the splendor of George Vanderbilt’s visionary estate.

Also Read: Top 10 Blue And Gold/Yellow Flags In The World

Safra Mansion is an enormous house located in Sao Paulo, Brazil and is own by Joseph Safra of the Safra banking family. The Safra family originally had property in New York but decided to relocate to Brazil owing to privacy reasons. It was constructed in 1895 and has a unique curved shape. It covers an area of about 117,000 square feet and has 138 rooms. It is closely modelled on the Villa Leopolda located in the French Riviera which was owned by another Safra brother (Edmond Safra).

Whitanhurst is a large house located in London, the United Kingdom which is constructed in the Georgian Revival style, which is also known as the Neo-Classical style. Though the property dates back to 1774, the house in its present form was constructed between 1913 to 1920 for soap magnate, Sir Arthur Crosfield. In 2008, it was sold to an offshore company owned by Russian billionaire Andrey Guryev. It covers an area of 90,000 square feet and has 65 rooms distributed across three floors.  Currently, Witanhurst is undergoing a basement extension which will extend the house two floors underground. This will make Witanhurst the largest private residence in London after Buckingham Palace.

Do not confuse this with the more famous, far larger and extravagant Palace of Versailles which was the residence of the French monarchs. Versailles House, also known as New Versailles is instead a private residence built by David and Jackie Siegal and is located in Florida, USA. It covers an area of 90,000 square feet.

As its name indicates, it takes inspiration from the famous Palace for its design. The house is still under construction and has been described as gaudy and a colossal waste of money due to absurd commodities such as an ice rink, the presence of 11 different kitchens and an elevator in one of the closets. It has been described as a monument to bad taste.

Fairfield Pond is a big house located in the Hamptons, New York. It is owned by Ira Renart. It is built in the Italianate style. It covers an area of 110,000 square feet. Its amenities include squash courts, two bowling alleys, an indoor basketball court and a theatre with a seating capacity of 164 among others. This house served as the inspiration for the novel ” The House that ate the Hamptons” by James Brady. It was constructed in 1999 and has multiple pools and oceanfront view.

One is a huge house built in the modern style and is located in Bel Air, California, USA. It was completed in 2013. The house covers an area of 100,000 square feet and is priced at 500 million dollars. It has a master bedroom of 5000 square feet along with a casino. The project seeks to redefine luxury and has designer walls made of jellyfish tanks. It differs from other large houses in its use of glass construction.

Image Source: The One’ is in Bel-Air, California. Photo: The Society Group

Chateau Pensmore is one of the biggest houses in the world and is located in Missouri, USA. It covers an area of 72,000 square feet and was built in 2016. It was constructed with a focus on durability and this unique house can withstand bomb blasts, earthquakes, tornadoes and fires. It is owned by Steven T Huff, who once said that “the house would stand for 2000 years.” It has five floors and walls that are 12 inches thick. It is also energy efficient.

Taohuayuan is the biggest house in China. Its design is inspired by the classical gardens of Suzhou, a UNESCO World Heritage site. Taohuayuan covers an area of 72,441 square feet and is located on a private island on Dushi, China’s largest lake. The rooms are designed in a manner that will allow natural light and enable its inhabitants to view the beautiful scenery. Apart from the lake view, this house also incorporates a swimming pool as well as a pond. The design of the house uses a mix of modern and traditional Chinese architecture. It is one of the biggest houses in the world.

Xanadu 2.0 is a large house owned by Bill Gates, the founder of Microsoft and the second richest man in the world. It was built in 2005 and is located in Washington state, USA. It covers an area of 66,000 square feet and it incorporates the latest technology in its architectural design. It overlooks Lake Washington and is constructed in the Pacific Lodge style. It was built with regards to environmental concerns.