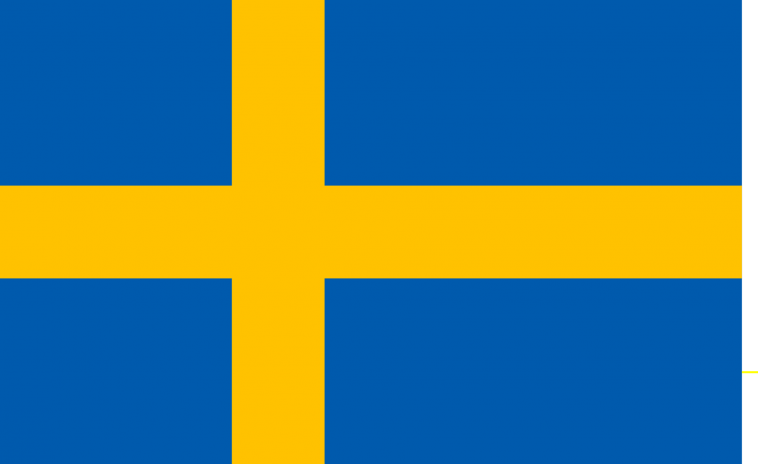 A flag can be theoretically defined as a piece of fabric mostly in rectangular or quadrilateral form which is in a defined shape and colors. It can be used to depict a country (national flag) or a signalling device, or for decoration. The study of flags is known as “vexillology”. Now, talking about the national flag, It used to represents and symbolizes a given nation. The national flag is flown by the country administration, however, it can be flown by its citizens too. We will discuss the top 10 blue and yellow flags,

Sweden which is officially known as the Kingdom of Sweden situated in the Scandinavian country in Northern Europe. This is the only nordic sovereign state with yellow on its flag. The country shares its border with Norway to the west, Finland to the east and it is connected to Denmark in the southwest by a bridge-tunnel across the Oresund. It is the third-largest country in the world with an area of 450,295 square kilometres with an approximate total population of 10 million.

Also Read: Top 10 Green And White Flags In The World

Cheshire is a country situated in northwest England popular for its rural villages of half-timber and local red sandstone buildings. The country flag is very beautiful with a design of a banner of arms and it was registered with the Flag Institute on 10 April 2013. It contains three golden sheaves of wheat and a golden blade on a blue background.

European Union is a combination of blue and yellow flags which symbolises both the European Union along with depicts the identity of Europe. The flag features a circle of 12 gold stars on a blue background. All of them stands for the ideals of unity, solidarity and harmony among the peoples of Europe. We cannot relate the number of stars with the number of member countries but it will directly represent unity.

Oregon is a beautiful state in the Pacific Northwest region of the United States. The country shares it borders with on the west by the Pacific Ocean, on the north by Washington, on the south by California, on the east by Idaho, and on the southeast by Nevada. The flag of the country is one of the two-sided blue and yellow flags. This is the only U.S. state to feature different designs on either side of its flag. The current flag of the country became official on February 26, 1925.

Alaska is also one of the US states located in the northwest extremity of the Americas. It shares a maritime border with Russia to the west across the Bering Strait. The flag of Alaska depicts the eight gold stars that form the Big Dipper and Polaris on the dark blue field. Talking about the Big Dipper, it symbolizes a bear which is an animal indigenous to Alaska. The stars in the flag can be used as a guide by the novice to locate Polaris and determine true north that will vary slightly from magnetic north.

Kazakhstan is officially known as the Republic of Kazakhstan situated in northern Central Asia. The country has one of the beautiful blue and yellow flags with a gold sun with 32 rays above a soaring golden steppe eagle that are centred on the sky blue background. The host site of the flag depicts a pattern known as “koshkar-muiz”. The blue colour depicts the religious significance to the Turkic peoples of the country along with cultural and ethnic unity.

Indiana flag was designed by Paul Hadley and officially adopted by the state of Indiana on May 11, 1917. It is one of the countries with blue and yellow flags and was the first official flag and remain unchanged till now. Indiana is a U.S. state located in the midwestern and Great Lakes regions of North America.

Ukraine is a sovereign country in Eastern Europe that shares it border with Russia to the east and northeast, Belarus to the northwest, Poland and Slovakia to the west, Hungary, Romania, and Moldova to the southwest and the Black Sea and the Sea of Azov to the south and southeast. The flag of Ukraine is a banner of two equally sized horizontal bands of blue and yellow flags. It represents the sky and the yellow represents wheat. Both combinations of blue and yellow are the symbol of Ukrainian lands comes from the flag of the Kingdom of Galicia–Volhynia used in the 12th century.

Sussex flag represents the flag of the English county of Sussex. Itw as registered with the Flag Institute on Friday 20 May 2011 that depicts the traditional county flag which comes as a campaign started in August 2010 by the Sussex resident Brady Ells, with support from his father, David. The flag was certified by the Chief Vexillologist, Graham Bartram and officially flown on Saturday 28 May 2011 at Lewes Castle.

Palau flag was adopted on 1 January 1981 when the group of the island separated from the United Nations Trust Territory. It has one of the blue and yellow flags where blue represents the ocean and the nation’s place within it. The yellow/gold disc on the flag represents the moon instead of the sun. Teh current flag was introduced in 1981 when Palau became a republic.