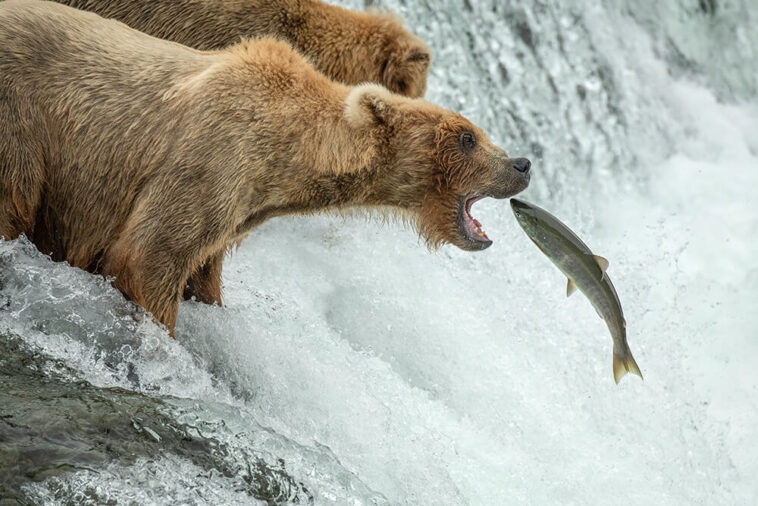 It is common knowledge that a few days in the wilderness help you mentally and physically refresh yourself. But if you plan to enjoy the wilderness in a grizzly bear country, always try to avoid a grizzly bear. Grizzly bears or brown bears usually avoid human beings, but if they are provoked or perceive any threat to themselves, their territory or their cubs, they may attack you.

They may come close to you if they recognize any food source nearby. They have extraordinary smelling power and can smell food from far away. Therefore, most experienced campers and foresters advise you to pack your foodstuff in bear canisters for backpacking.

The Smell Power Of A Grizzly Bear

Experts consider the smell system of grizzly bears the most developed one in the whole animal kingdom. As they have an incredible smell power, they depend more on  their sense of smell than the power of vision to locate food and other objects.

How Powerful Is A Bear’s Smell Capability?

They can recognize and locate by sniffing a campsite situated twenty miles away and a human being from about two miles.

Why Is The Animal’s Smelling Capability Exceptional?

The organ that regulates the sense of smell – the olfactory bulb of the animal is around five times bigger, while its brain size is three times smaller than that of regular human beings. Moreover, its highly vascular nasal mucous membrane inside its large snout is one hundred times larger than that of a human nose.

The mucous membrane consists of smell receptors; and, there are far more numbers of receptors in a bear’s snout. Moreover, there are hundreds of minute muscles that help it to move the nose more freely.

Why Is A Grizzly Bear’s Smell Capability So Developed?

The animal is a carnivore and eats both vegetables and meat. But it usually does not hunt but searches for and collects food in wild surroundings. The highly developed sense of smell helps them locate foods from a distance so that they have to walk less in search of food and thus can conserve their energy.

The animal loves human food because it has a high energy value, and a small amount provides more energy than other wild foods like fruits and animal carcasses. Moreover, once the animal gets addicted to it, they often dislike wild foods. Research has shown that the offspring of an addicted bear also develops a sense of preference for human foods.

You Should Select A Proper Campsite

If it is not a developed campsite and you are backpacking, avoid sites near berry trees or other food sources of the animal, like animal carcasses. You should also avoid sites where you see bear scat, claw marks on trees or other signs of the presence of a bear.

Take Precautions To Store Your Foodstuff

The conventional way of storing food was to hang food stuffed in an odor-proof bear bag on a tree branch fifteen feet away from the tree trunk and fifteen feet above the ground by a cord and at least two hundred yards away from the sleeping area. But it had two problems: finding a suitable tree for the purpose and throwing the cord over the branch.

Nowadays, most campers are using odor-proof hard-sided cylindrical canisters to keep their food. It is also recommended by wildlife wardens and is made compulsory in some national parks, such as Olympic National Park.

The problem with these canisters is that they weigh much more, two pounds in comparison to the odor proof bags weighing around three hundred ounces. But you should remember that a little more weight is better than the dangers of losing food and bear-raid. You must store these canisters more than a hundred yards away from your resting place.

Grizzly bears have a very high smell capability and can locate food materials from long distances. They invade the campsites stealthily for food and try to avoid human beings. So it is better to keep food away from sleeping areas in the camps so that while stealing food, they do not confront you, feel threatened and attack you in self-defense.

Preventing these animals from eating human food also helps them, as with foodstuff, they eat wrappers and foils, which is detrimental to their health.