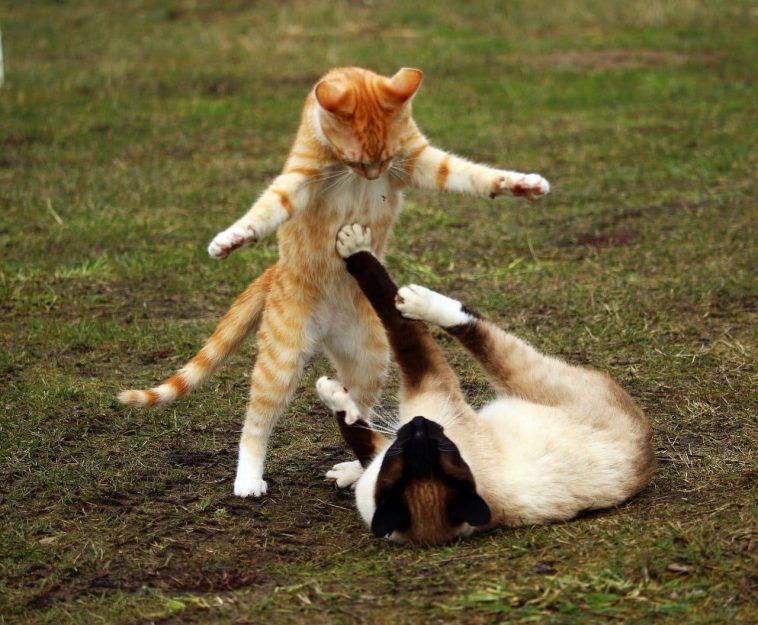 The animal kingdom is blessed with a big and diverse Cat family that consists of a wide variety of animals. These animals range from the fluffy house cats that we so adorably keep as pets, the agile jaguars and pumas, the leopards and the panther, and the mighty tigers and lions. There are 37 cat species worldwide that exist in almost all regions of the world except Antarctica. All members of the Cat family are carnivores and hunt down animals for food. They have a flexible body with muscular limbs and can run fast to catch prey. Most of these animals are solitary predators and do not stay in social groups, except for the lions. The Cat family members are highly territorial. They show visible territorial aggression when they feel an intruding animal has attacked their territory. We will discuss cat family battles in the wildlife,

These Cat family members are known for their fights due to any reason-territory invasion, aggression between two male members, or armed conflicts. Below we explore cat family battles that take place between various members of this big family. Let me list down some of the famous cat family battles,

The domestic cat, as we all know this Cat family member, is more territorial than dogs. Domestic animal cats show their aggression by chasing and ambushing the intruder. Their battle may start with hissing and swatting when they meet another cat. This fight often occurs when a new cat is brought into a household, or when a cat encounters another one in its neighbourhood. They may stalk other cats and howl and even bite in extreme cases.

The Tiger is the heaviest of all the cat family members. Tigers generally don’t fight with each other, except when it comes to mating. A tiger will compete with another one just like a sumo wrestler. They can stand upright and fight with their paws. They may growl and pull each other down, may aggressively attack, but rarely kill each other. Tiger battles are more for male dominance and mate challenges.

The battle between a lion and a tiger is among the most ferocious ones in the cat family. Lions are mighty creatures and hunt by chasing. They can bring down even massive animals by attacking them. They love to fight and can fight till death. Lions fight to defend their pride or for prey, and are victorious most of the time. Tigers are heavier than lions and can run much faster, but are not much intelligent. In a battle between a lion and a tiger, the fight can get ugly, till the lion dominates over the tiger and makes him run away.

A cheetah is about half the size of an adult lion, but speedy and agile. While the lion relies on getting close to its prey before an attack, the Cheetah’s speed is advantageous. It chases its prey in the open area. Cheetahs are faster and lighter than lions and can climb trees. In a chase, a cheetah can easily outwit a lion. However, in case of an attack, the heavy and muscular lion can bring down a cheetah in minutes and tear it to pieces.

Cheetahs generally do not fight with each other. They mark their territory and try to stay away from each other. However, during the mating season, two male cheetahs can fight ferociously with each other over a female. One Cheetah may pin down the other one with his front feet and jaws. He will try his best to get on the back of the other Cheetah. Then he will use his sturdy back legs to misbalance his attacker. The cheetahs do not kill each other but can put up a good fight until the other runs away.

A Leopard is more powerful than a cheetah, and its body weight is also much more massive than a cheetah’s mass. Leopards have strong and powerful canines and can ambush larger animals. They can land on top of a victim and dig their powerful spiked teeth. An attacking leopard can dig its sharp canines in a cheetah’s neck and attack from the front or below if given a chance. If the Cheetah can escape a clinging leopard, he is saved. On the contrary, it is tough for a leopard to escape if a cheetah chases him. Very soon, this fast predator can catch up with the leopard and kill him. The battle result depends on which animal attacks first and the location of the attack.

The Tiger is a massive predator compared to the Cheetah. It has a heavy body, a higher bite force, and more stamina than a 120 kg cheetah. Its claws are much longer, and muscles are more powerful than that of a Cheetah. In a battle between a tiger and a cheetah, a tiger can kill a leopard without much effort. Tigers can usually win their battles with most animals.

The fight between a tiger and a jaguar can be a rare scenario as Tigers mostly inhabit the Asian continent. The Jaguars are found in the Americas. Both the members of the Cat family have different characteristics. While a Tiger is massive and heavy, jaguars are lightly built and much similar to a cheetah. Jaguars are avid tree climbers, something which a tiger cannot do because of its weight. Both can kill their prey with a single bite. However, in a fight between a tiger and a jaguar, a tiger will always have the upper hand because of its big size. Jaguars can escape fast or swim in the water, or can climb trees to escape the tiger.

Jaguars are large and bulky cats, with long legs. Their big bodies have spots that are called rosettes. These rosettes are patterns of rings, with dots in the centre. Pumas are also known as mountain lions or cougars. In comparison to a jaguar, they are more slender and sleek than jaguars. They have a plain beige or brown coat without any spots. It is one of the famous cat family battles in the wild.

Jaguars are very strong and can easily outweigh a Puma.  Generally, both species prefer to avoid combat and do not get into fights quickly. If the puma encroaches on the jaguar’s territory, it always retreats first. A jaguar also has a much more massive bite force and can tear a puma to pieces if both are caught in a fight.

The Lion is undoubtedly the King of the Jungle due to its might and courage. Lions are not only huge but also have powerful jaws and sharp claws to tear down their enemy. In the case of a battle between two lions, both are formidable opponents. They have the same set of weapons and power. Lions can fight over territory or prey or even protect their pride. Two male lions attack each other’s back and hind body, which are the vulnerable areas. A Lion vs. lion battle can be deadly and may involve a lot of bloodsheds. Lions fight ferociously to protect their pride.

These are some of the famous cat family battles that you should know about. Kindly share and do post your comments.