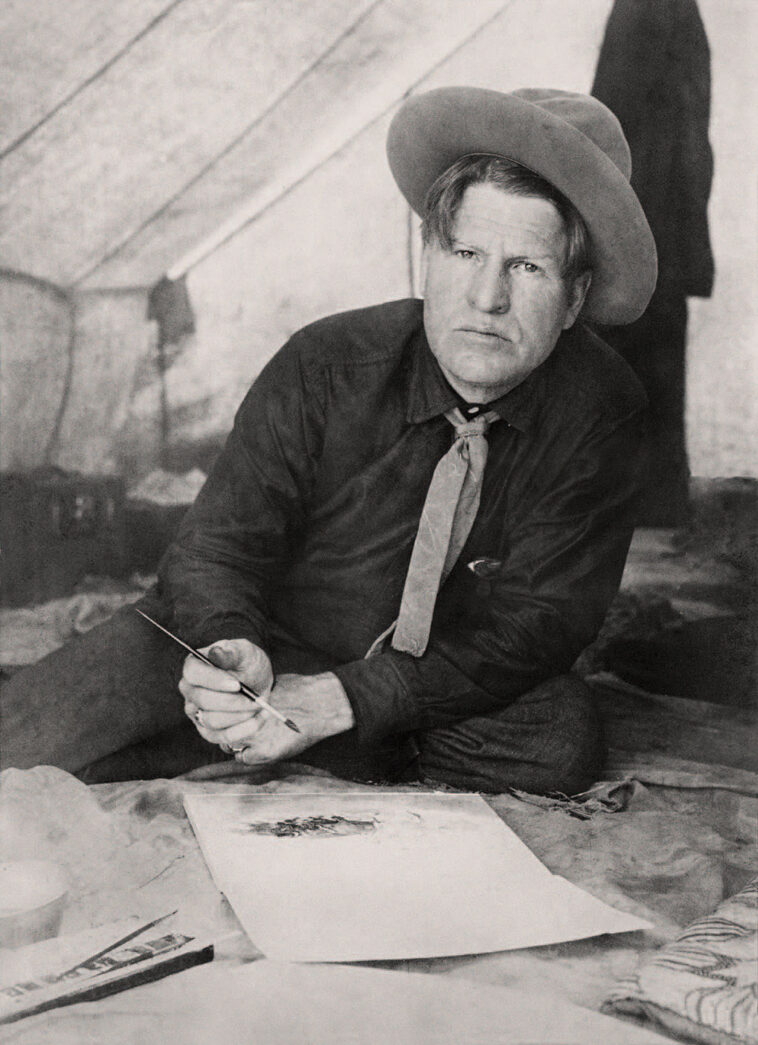 By the end of the 1800s, many artists depicted cowboy life in their writings and paintings. Although some painters never actually sold any paintings or their works have since been “forgotten,” some painters had great success, and most of their paintings are included in art museums and large private collections.

One such successful artist is Charles Marion Russell. His stories and paintings have been described as the most authentic of the period. He is also known as the artist who depicted American Indian culture without bias.

In this article, we’ll discuss the life story, career, and works of art of Charles Russell and indicate why he is known as the “Cowboy Artist.”

Most art critics and historians agree that Charles Russell paintings are authentic because he knew the American West. In fact, he lived and worked in the American West for years. So let’s briefly look at his life story.

Charles Russell, an artist from America, was born and bred in Missouri. As a child, he started to draw sketches and make clay figures of animals. From a very young age, he was intrigued by the American West. He spent hours searching for more information about the “wild west.” He spoke to explorers of the American West and the fur traders who traveled through Missouri. He also loved horses, and he learned to ride horses at Hazel Dell Farm in Jerseyville, Illinois. He was fortunate to receive most of his early riding lessons on a famous Civil War horse called “Great Britain.”

But Russell wanted to experience the American West lifestyle, and at the age of 16, he left his home. After that, he moved to the Judith Basin area of Montana, where he started to work as a cowpuncher. Later he became a “full-time” cowboy but also created drawings, sketches, and paintings of other cowboys and cowboy activities.

The Western artist Charles Russell’s career, not only included “cowboy life,” but he also resided for some years with American Indians. And just as during his “cowboy period,” he was always sketching, drawing, and painting the environment and the American Indian people around him.

In 1896, Russell married Nancy, and in 1897, together, they moved to Great Falls, where they spent the rest of their lives. Nancy had the “business brain” and organized exhibitions for Russell, making him famous in the United States, Canada, and London. With her determination, she established him as a painter and not just an illustrator.

Why Charles Russell is called the “Cowboy Artist”

The main reason why Charles Marion Russell is called the “Cowboy Artist” is that he is considered a cowboy himself, telling stories about cowboy life and painting other cowboys and cowboy events. He is not seen as “an outsider,” depicting a lifestyle not fully understood.

Brian W. Dippie, a professor of history at the University of Victoria in British Columbia, summed Russell’s believability up after a collection of Russell’s short stories, called “Trails Plowed Under,” was published. According to Dippie, Russell wrote and painted true stories of American cowboys and other events in the American West in the late 1800s. This resulted from the long periods he lived in the West to acquire a lot of information about the cowboy lifestyle and customs.

Because of his life as a cowboy, he could depict the period accurately and with insight. He always portrayed cowboy life positively. When he painted cowboys’ interactions with American Indian people, he portrayed the sophisticated American Indian culture he knew.

It is important to note that Charles Russell’s paintings of cowboys are not the depiction of what the cowboy would do under the circumstances. Instead, he depicted scenes of how he experienced and actually saw the event. He lived as a real cowboy for a very long time.

List of Charles Russell Paintings – Some of His Famous Cowboy Paintings

Charles Russell produced more than 4,000 works of art, of which more than 2,000 were drawings and paintings, and therefore it is impossible to name all his famous cowboy paintings. But paintings you’ll be able to view online to give you examples of his unique cowboy paintings include:

Russell not only painted but lived the life of a cowboy for several years, so he could see the humor in everyday cowboy situations. This isn’t something not to be found in the works of most other “cowboy painters.”

The best example of this is his masterpiece “Meat’s Not Meat Till It’s in the Pan. The painting humorously depicts a typical cowboy dilemma. In this painting, a cowboy is depicted who has shot his prey, but the prey has fallen under an outcropping. The cowboy is now considering options for how to retrieve his prey. Russell also added dark humor to the painting by making it a winter scene with many blue shades. According to art critics and lovers, a theme like this is only possible if you’ve lived as a cowboy.

Suppose you are enthusiastic about cowboy paintings and want depictions of the “real” American West in the late 1800s. In that case, you have to study the works of the Cowboy Artist Charles Marion Russell. His paintings defined the West for many years. We hope this article helps you better understand Russell’s works’ uniqueness.