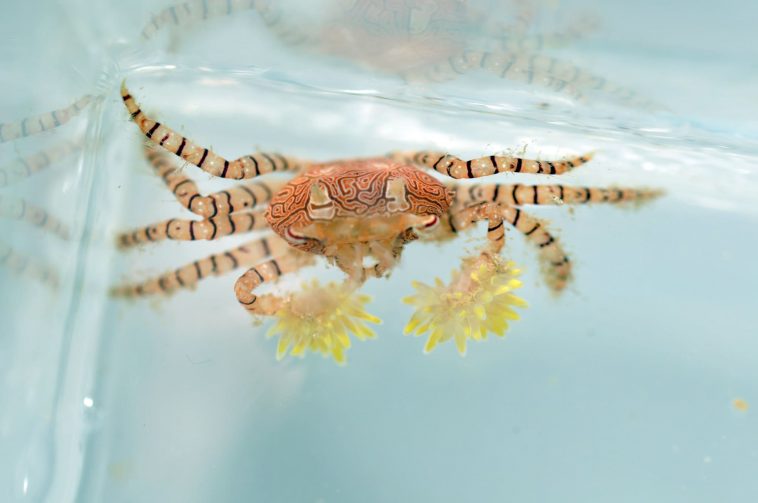 You can’t explain craziness. Some of us are just born with this unique characteristic that defined our cool quotient. The animal kingdom is also not untouched by the craziness factor. We all have heard about animals having funny appearances, behaving in crazy ways, having ridiculous eating or sleeping habits, or employing funny means to hunt or trap animals for prey. Below is a list of craziest animals that can make your jaws drop with their craziness! Have a look.

The hairy frog is an African frog species. It is uniquely known as the Wolverine frog or the Horror Frog because of its hairy wolf-like appearance. There are hair-like structures on the body and thighs of the male frogs. They are dermal papillae which contain numerous blood vessels that work like external gills. This frog has one of the craziest defence mechanisms where it can break its toe bones to produce cat-like claws when it is threatened. This occurs only in the hind feet. When the frog is at rest, the bones stay surrounded by a mass of connective tissue.  It is one of the craziest animals in the world.

This is a unique toad species native to China. These toads are also known as the Emei toads and the male toads have large snouts up to 9 cm in length. In the breeding season, male Emei moustache toads grow stiff upper lip spikes that look like a needle-like mustache.  The toads use these spikes to battle with rival toads for mate selection. A typical Emei toad can plunge his mustache into his rival’s stomach, stabbing with the sharp spikes.

One of the craziest animals in the world, The Lybia crab is a species of tiny crab in the family Xanthidae, which is native to the Hawaiian Islands. These crabs are known for always carrying a small living sea anemone around in each of its claws which look like tiny boxing gloves or pom-poms. It is for this reason that these crabs are also known as the “Cheerleaders of the sea”.  These anemones help them to catch food from the rocks and protect themselves from predators. This crab threatens its enemies by waving its anemones around, whose tentacles have stinging cells called Cnidocytes.

Horned lizards are the toad-like North American lizards that are also known as “Horntoads”. They have a flat, round body with a blunt snout like a toad. A distinct feature of the Horned lizard is that when it feels threatened by a predator, it shoots blood from its eyes! What really happens is that when the Horned lizard feels threatened, it closes off blood supply to certain vessels due to which pressure in its head suddenly increases. Its sinuses and eye sockets get flooded with blood which is squirted out in the form of a   jet from each eye. It can reach as far as 1.5 m which scares the predator.

Woodpeckers are commonly found in major parts of the world except in the Polar Regions and Australia, New Guinea, New Zealand, Madagascar. Most woodpeckers spend their entire lives in trees. Woodpeckers have strong bills which they use to drill trees and chip barks. You can hear woodpeckers calling loudly or drumming on wood in the spring to attract females. The USP of a woodpecker is its really long and sticky tongue which it uses to extract insects and larvae from the tree trunks. Its tongue can be up to four inches long. It has a glue-like substance covered on its tongue which helps in extracting insects. It is one of the craziest animals in the world.

The Skua birds are a group of predatory seabirds in the southern oceans and Antarctica region. They are very aggressive birds, who are known to steal food from other birds. It is for this reason, these birds are also known as “Avian pirates!” Arctic Skuas live most of their lives at sea and resemble a falcon, except for their beak. These birds feed off other birds and can fight with other sea-birds like terns or gulls to force them to drop fish they have caught. The Skuas can also scavenge waste discarded from boats.

The Red Squirrel is a species of tree squirrel common throughout Europe and Asia. These squirrels are omnivores and feed abundantly on nuts, seeds, and insects. They are highly territorial and aggressive rodents, who cannot tolerate anyone in their territories. They have large bushy tails which they flicker a lot while fighting with other squirrels. Red squirrels can cause substantial havoc or destruction in your garden. They can raid bird feeders and feed on your plants and trees. They can dig holes to bury nuts in your garden and dirty the lawn as well.

The Giant Anteater is native to Central and South America.  This insectivorous mammal has an elongated head and nose to get in and out of a termite mound or anthill. They have sharp claws to tear an opening into an anthill. Its distinct feature is its long snout and a narrow, sticky tongue like a noodle strand. The giant anteater has one of the longest tongues among mammals. That can reach up to 2 feet long and has tiny, spikes covered in sticky saliva that assist in feeding.

The Banded Archerfish is an avid hunter and is known for its habit of preying on land-based insects by shooting them down with water droplets from their specialized mouth. They have sharp eyes with binocular vision. These fish are known for their crazy hunting skills. As soon as they spot a bug or an insect above them, they shoot a powerful stream of water to knock it into the water. These fish can shoot up to seven streams in one mouthful of water!

The Margay is a large ocelot or wild cat, with a small head, and long tail and legs. It is native to South American habitats. The Margay is a skilful climber and can climb trees with ease. It can spend its entire life in the trees, where it leaps through the treetops, chasing birds and monkeys. It is, therefore, also known as the Tree ocelot. These wild cats can hang from branches with only one foot. The craziness factor of this animal lies in the fact that it can mimic the vocalization of small monkeys to deceive and prey on them in forests.

These are some of the crazy animals inhabiting our planet. While some of their habits may seem bizarre or downright crazy, there is a survival instinct and reasonable preference for such craziness and weird habits in these animals. It is always interesting to explore new facets of the animal world. Craziness always intrigues us and will continue to do so. These are the craziest animals in the world.