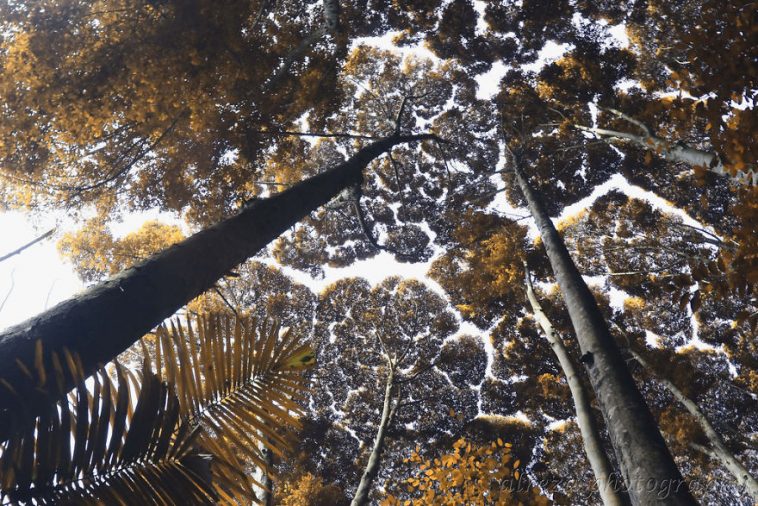 Crown Shyness is defined as a phenomenon where fully grown trees avoid touching each other by forming a canopy with channel-like gaps. The phenomena are common both in similar and different species of trees. There are various theories behind crown shyness that suggest that it might be because of leaf-eating insect larvae, howvever, the exact basis of teh phenomena is still not certain. It has been a hot topic among researchers and scientist since 1920.

Also Read: What is Sustainable Development And How it is Important To Humanity

There is some hypothesis that says the interlinking in branches leads to “reciprocal pruning” of adjacent trees. This is because trees in the windy areas suffer physical damage as they collide with each other during winds, as a result, trees induced crown shyness response. This phenomenon occurs in various trees like lack mangrove trees, eucalyptus, Sitka spruce, camphor trees, and Japanese larch. Crown Shyness is more common in tropical trees that have a flatter canopy. There are various theories that suggest that trees do this too improves light exposure to maximize photosynthesis done by the tree leaves.

Let us discuss in detail, It is believed that trees has a natural system of measuring light and telling time. Trees can very easily observe that if the light is coming from the sun or if it’s being reflected off leaves. Leaves are capable to detect far-red light bouncing on to them after hitting the trees nearby and when they judge that it is being reflected off leaves, this will be the signal that there is a nearby plant, so let’s slow down the growth in that direction, however, there are other studies that we have discussed the spread of harmful insects among plants and trees.

Also Read: 15 Striking Pictures Of Climate Change That Every Denier Should See

To conclude, Trees are teh best part of nature that is indeed beautiful and beneficial. There are different beautiful trees species with colourful leaves and shapes but at teh same time, they are home numerous bird species and other animals. Humans are also dependent on trees to survive on this planet. Trees provide oxygen, food, medicine and they attract rain. Now, see the beautiful pictures of trees practising social distancing.