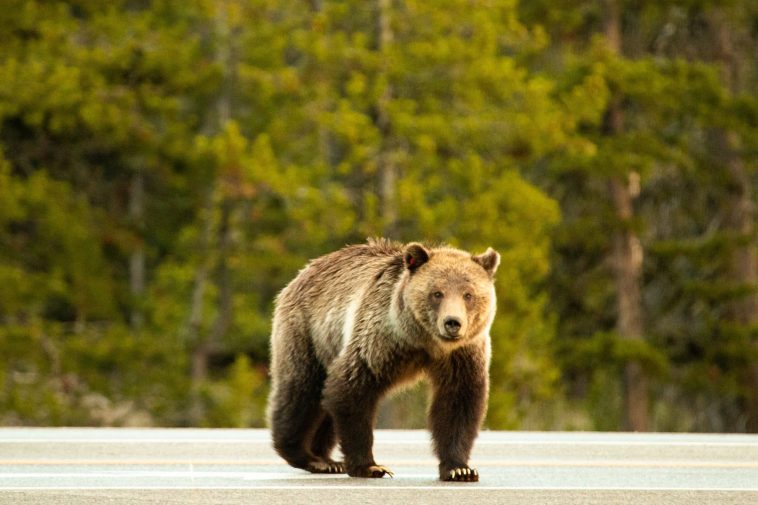 The Old West in America is often referred to as the Wild West. It geographically includes those states that lie to the west of the Mississippi River. Arizona, Nevada, California, New Mexico, Colorado, Idaho, Kansas, Montana, Oregon, etc. are some of the states covered under Western America. These states are home to the wild western gunfighters, American cowboys, and tales of buried treasures on the frontier. Several Old West legends focus on the rich history, people, information, and travel destinations of the American West. Western America has rich wildlife, full of a wide variety of animals ranging from grey wolves, bison, wild horses, brown bears and bighorn sheep to the Bald eagles and the Roadrunners and even deadly snakes and scorpions. Let us explore the dangerous animals in Western America.

The Grizzly bears are the popular North American brown bears. They can be as tall as 8 ft in height and can weigh from 180 kg to 360 kg. They are highly intelligent and have excellent memories. Detecting food from great distances away, grizzlies have a very strong sense of smell. Grizzly bears normally avoid contact with people. Adult grizzlies do not climb trees and can stand up on two legs on the ground to ward off their attackers. Mother bears defending their cubs become the most dangerous and are the most prone to attack. They are responsible for 70% of humans killed by grizzlies.

The American Bison or the American buffalo is a large species of buffalo found in the Wild western regions. The bison is the largest North American land animal. Male bison can reach a height of six feet from hoof to shoulder and weigh between 1000-2000 pounds. Bison live in a variety of groups. They are among the most dangerous animals and will attack humans if provoked. They appear slow because of their lethargic movements, but can easily outrun humans; bison have been observed running as fast as 40 mph for as far as 8 km.

Alligators, while dangerous animals are relatively timid compared to crocodiles. Crocodiles are much more bad-tempered and can attack humans, even unprovoked. Australian saltwater crocodiles are considered the most dangerous in the world. Male alligators can grow up to 10 to 15 feet in length and can weigh 1,000 pounds. Adult alligators are expert predators, with their toothy jaws and long scaly tails. A hungry gator will eat just about anything, including carrion, pets and, even humans. The American crocodile is potentially dangerous to humans, with even the smallest species inflicting painful bites requiring stitches. Saltwater crocodiles are listed as one of the apex predators in the world.

Rattlesnakes are a group of venomous snakes, who get their name from the rattle located at the end of their tails It makes a loud rattling noise as the snake moves that send out a warning to other animals around them. These predators live in a wide array of habitats. They hunt small animals like birds and rats. Adults usually vary in length from 0.5 to 2 m, but some can grow to 2.5 m. The prairie rattlesnake of the western United States is among the largest rattlesnakes. These creatures are generally shy, but they are poisonous and can be dangerous if molested.

The cougar, is commonly referred to as a puma, mountain lion or panther. It is the second-largest cat in North America. A cougar may attack if cornered, and they can chase a fleeing human, or if a person “plays dead.” The cougar may consider a person easy prey if he stands still. They are found in a variety of habitats that include forests, high mountains, deserts, and jungles. The USA alone has about 30,000 mountain lions. Cougars become dangerous when under threat, and encounters between humans and mountain lions then begin to rise.

Sharks have a bad reputation for being aggressive, scary killers. Every year, around 80 unprovoked attacks are reported. The US states in which the most attacks have occurred are Florida, Hawaii, California, and Texas. In California, white sharks are prevalent in the Atlantic waters.

Coyotes are wild and generally avoid people. However, they should be treated as potentially dangerous. Coyotes are known to attack dogs, sheep, and other sheep, goats and hens. Coyotes rarely attack humans. Any person running away from a coyote is considered a prey and becomes worth chasing.  In many other instances, people were bitten while trying to rescue their pets from a coyote attack. Sometimes people are bitten by cornered coyotes. Most of the coyote attacks have been recorded in the LA County area.

The Bark Scorpion is the most venomous in the United States. Most of the scorpions in the U.S. are found in the southwest, preferring the warm, dry climates found in Arizona, California and New Mexico. The bark scorpion‘s venom can cause severe pain accompanied by numbness, tingling, and vomiting in adult humans. The number of victims inflicted by the stings of these scorpions in Arizona is estimated to be in the thousands.

There are about 4000 species of bees and wasps in America. Honey bees can attack in large numbers when provoked, while wasps are naturally more aggressive predators. Honey bees sting only once and die after attacking. A single wasp can sting multiple times. Hornets are the largest of the wasps and are similar in appearance to the wasps. When threatened, the hornets can sting in large numbers, and their stings can be more dangerous than those of bees.

The Bobcats, are also known as wildcats. They are twice as big as the average housecat. They have long legs and large paws. They generally hunt or insects, chickens, geese and other birds, small rodents, and even deer. Many cat bites become infected, sometimes with serious consequences such as cat-scratch disease, or, more rarely, rabies. The bobcat hunts animals of different sizes. It can adjust its hunting techniques according to its prey. It is one of the most dangerous animals in western America

These are the various animals found in West America that can often be dangerous.