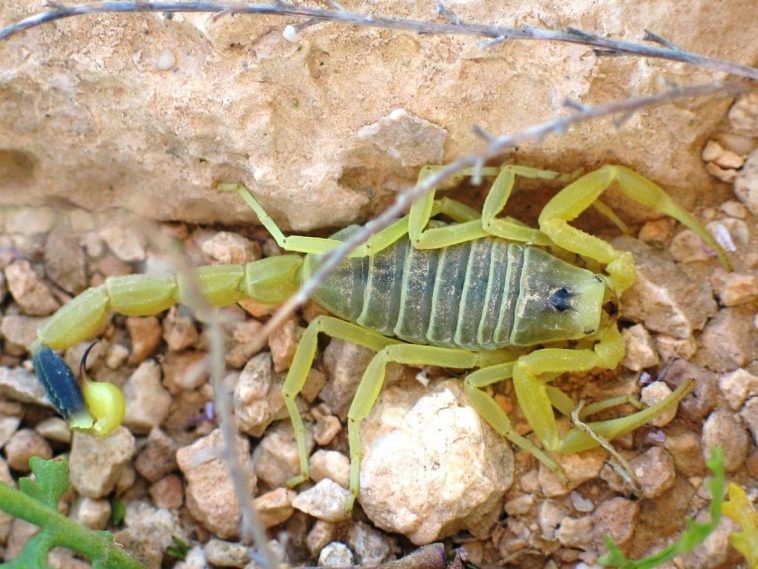 Scorpions are a symbol of evil. The scorpion became a symbol of Judas and treachery because of its notorious bite. It has been considered as a symbol of vileness and treachery on the flags and shields of soldiers who assisted at the crucifixion of Christ. In the animal world, scorpions are predatory arachnids with eight legs. They are easily recognized by the pair of grasping appendages and a narrow, segmented tail. Their tail is often carried in a characteristic forward curve over the back and ends in a venomous stinger. We will discuss deadliest scorpions in the world.

Not all scorpion species are deadly. About 25 of the 1,500 known species of scorpions can deliver fatal stings. Scorpion stings are painful and can cause severe bites, pain, fever, and muscle aches and skin injury for days. Some scorpions are potentially lethal but they cannot kill healthy adults. Burt their neurotoxins can cause troubling symptoms like convulsions and shortness of breath. Below we explore the top 10 deadliest scorpions and what makes them a source of terror.

Deadliest scorpions in the world

This is a fat species of South African scorpion that can grow up to be 6 inches in length. It is found in the desert regions and scrublands of Africa. This scorpion species has small pincers and a thick, powerful tail with a potent sting. With a lethal dose of 4.25 mg/kg, the venom itself is around the same potency as cyanide. It produces two types of venom- the first “prevention” is used to immobilize smaller prey or deliver a warning sting. When dealing with bigger prey, it can use more toxic venom. The Spitting thick tail scorpion can spit its venom up to the 1-meter distance. It can cause temporary blindness damage to the target’s eyes.

This is one of the most dangerous groups of scorpions’ species in the world. They are found in arid regions of the Middle East and Africa. Known by the scientific name, Androctonus australis, the Yellow fat Tail Scorpion is a hardy desert scorpion that can be up to 10 cm long. Its name Androctonous means “man killer” in Greek. It has a pale yellow colour and can grasp with its sharp claws and then sting by arching its tail over its head. This species is known for its very powerful venom and for taking several human lives each year.

One of the deadliest scorpions in the world, The Arizona Bark scorpion is a deadly scorpion found in the US. It is a small light brown scorpion and dwells in the  Sonoran Desert in the United States and north-western Mexico. An adult male can reach 8 cm in length, while a female is slightly smaller than the male. These scorpions have a light brown colour and a little bump or “subaculear tooth” that on its tail below the stinger. Their venom is very potent and can even kill you. This scorpion’s sting is very unpleasant and can cause pain, burning, or a numbing sensation where you get stung. They can hide under rocks, crevices and even in trees and bark.

deadliest scorpions in the world, the Arabian fat-tailed scorpion is another dangerous scorpion, notorious for its stings and venom. It is found in North Africa and the Middle East. It is a relative of the Yellow Fattail scorpion and is a medium-sized scorpion. It can prey on insects, spiders, lizards and small rodents. The Yellow Fat –tail is known for its aggressive temperament and lethal venom. Its venom contains one of the most potent neurotoxins of any scorpion. These sting poisons can fast attack the central nervous system and cause respiratory failure and even paralysis.

The Brazilian yellow scorpion is considered the most dangerous scorpion in South America. Brazil’s cities provide excellent habitat for these scorpions. These scorpions have extremely toxic venom. The number of people stung by scorpions across Brazil has risen to 140,000 in 2019, according to their health ministry reports. A unique feature of the Brazillian Yellow Scorpion is the miracle of parthenogenesis- i.e.  It reproduces without any male participation and the female scorpion will generate copies of her twice a year, spawning up to 20 to 30 baby scorpions each time.

These scorpions belong to the species of burrowing scorpions, which are known for making deep and spiral burrows in the sandy soil. Their burrows can be up to 1 m deep. They are found in southern African countries. They are larger than normal scorpions with a bulky body and large pinchers. They have broad, powerful claws. The Yellow-legged Burrowing Scorpion is a yellow-rust brown. Its legs are of a lighter yellow colour than the body, which gives its name. These scorpions are known to stridulate or make a hissing sound when disturbed, due to which they are, also known as “Hissing Scorpions”.

As their name suggests, these scorpions are native to African countries, especially Tanzania. They have a black body and red-coloured claws. In some species, the claws may have a slight tint of red. They are 10 to 12.5 cm in length and mainly dwell in humid climates like the forest floor of the African tropical rainforests. They use their large pinchers to prey on insects, frogs, small mice, and other rodents. They use their stings for defence and may get very aggressive when threatened. Their stings are not fatal but can cause pain and pinching or even a burning sensation.

The emperor scorpion is one of the largest scorpions in the world. This species is native to rainforests and savannas in West Africa. It lives for 6–8 years. Some of these scorpions can reach up to 8 inches in length. They have a deep black colour and large size, which makes them appear to be a formidable species. Scorpion stings hurt, yes, but they are usually not fatal. Still, you would want to stay as far away from as possible.

The Deathstalker Scorpion is one of the world’s most lethal scorpions in the world. This species is found in the deserts and scrublands of North Africa and the Middle East. They grow up to 3 inches in length and have a distinct yellow colour and a darker body. The sting from a Death Stalker can result in excruciating pain. It leads to increased blood pressure and heart rate, and can even cause muscle convulsions, and comas.

Another deadly and lethal scorpion in the world is the Indian Red Scorpion. They can be found in India, eastern Nepal, Pakistan, and Sri Lanka. They can grow up to 3.5 inches in length and have dark orange or reddish-brown colour. They are nocturnal creatures.  The Indian Red Scorpion stings have caused death in between 8 -40% of all recorded cases. Common symptoms of their bite include sweating, nausea, vomiting, heart problems, and severe pain. In more serious cases, it may lead to respiratory failure and finally death.