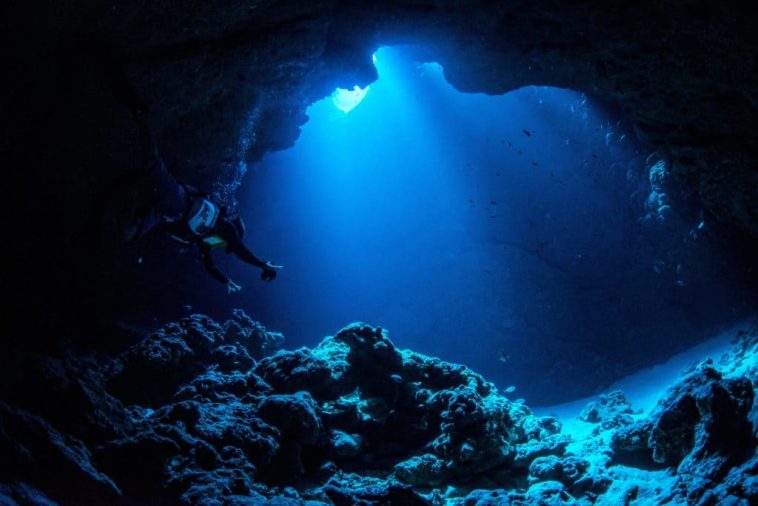 Depths of our Earth hold great mysteries and wonder. Humans have always been interested in reaching the maximum accessible depths below our Earth. There are places on Earth that go down to unbelievable depths-both natural wonders like ocean trenches and caves and human-made structures like boreholes, oil rigs, and mines. These deep places on Earth can reach down to hundreds of miles below sea level to the dark depths of our planet. Some of these are accessible to humans, while most of them are not. Below we explore the top ten deepest places on Earth.

Lake Baikal in Siberia, Russia, is a natural wonder and the deepest lake in the world. It has a depth of 1642 m. The bottom of the lake reaches 1187m below sea level. It is also the world’s largest freshwater lake, with its water volume almost equivalent to all five of the North American Great Lakes. A network of hiking paths surrounds it called the Great Baikal Trail. Lake Baikal sometimes appears so clear and transparent, especially during the summers, that it is possible to see more than 40 m down.

The Bentley Subglacial Trench is a vast bowl-shaped trench in Marie Byrd Land, West Antarctica. It is located at a depth of 2,555 meters below sea level.  It is among the lowest points on Earth’s surface, which is not covered by the ocean but by ice. It has been named after geophysicist Charles R. Bentley who discovered it during his expedition in West Antarctica in 1957–59.

As per estimates by Rock Experts, cave depths cannot be higher than 3,000 m because of the pressure of the overlying rocks. To date, this type of deep cave hasn’t been discovered yet. However,   there are a few caves that go deeper than 2,000 meters. Veryovkina Cave is one of the only two known caves on Earth that go deeper than 2,000 meters. It is located in the Gagra Mountain Range in Georgia. As of today, explorers have been able to reach the maximum depth of 2,212 meters. The other is the Krubera Cave in Abkhazia, Georgia, which is located 2,197 m below the Earth’s surface.

A “blue hole” is a giant sinkhole in the ocean that is visible from Earth’s surface. According to CCTV, the world’s deepest underwater sinkhole is in the South China Sea. This hole is located in a coral reef off the Paracel Islands in the South China Sea and is known as the “eye” of the sea by the locals. It is 300 m deep. Fish species are found in the upper part of the sinkhole, while below 100 meters, life is unlikely because it is mostly oxygen-free. It is one of the deepest places on Earth.

One of the deepest mines existing on Earth is the AngloGold Ashanti’s Mponeng gold mine. It is located in the south-west region of Johannesburg in South Africa. Research at the end of 2018 showed that the operating depth at Mponeng mine ranged from between 3.16km to 3.84km below the surface. The mine is being expanded and is expected to extend the working depth to 4.27km.

Also Read: Top 10 Most Famous Volcanoes In The World

One of the deepest places on Earth, The Sarisarinama Sinkhole in Sucre is a sinkhole site in the Sarisarinama Mountains in Venezuela. The densely vegetated mountain’s high tabletop has four giant sinkholes. Each of these sinkholes has been carved as natural circles in the thickly forested mountain. The largest of the sinkholes is 352m wide and 315m deep.

The deepest underwater trench is the Mariana Trench, which is located in the western Pacific Ocean. It is about 200 km east of the Mariana Islands. This crescent-shaped trench region measures about 2,550 km long and 69 km wide. Its maximum known depth is a whopping 10,984m i.e., close to 11 km below the water’s surface. The depth is so intimidating that the bottom of the trench has an immense water pressure of 1,086 bars, which is more than a thousand times the standard atmospheric pressure at sea level.

The Earth has several points that go immensely deep into the crust. The Challenger Deep is the deepest known point in the Earth’s seabed in the ocean with a depth of 10,900 to 10,929 m by direct measurement. This distance has been scientifically measured using deep-diving submersible ships and remotely operated vehicles that use sonar bathymetry for deep-sea distance measurement. The trench bottom has an enormous amount of water pressure at 8 tons per square inch, which is sufficient to crush a human! This water pressure increases with depth. The only time humans descended into the Challenger Deep was more than 50 years ago. As of today, it remains inaccessible.

The deepest point on land is the Denman Glacier in East Antarctica. Glaciologists have discovered that the trench under the glacier is about 3.5 km below sea level. However, at this depth, there is no ocean water present here but flowing ice. The trough is vast, with a length of 100km and a width of 20 km. It is like an ice-filled canyon.

Till 2012, Kola Super Deep held the world record in being the deepest dug borehole reaching to a whopping 12,262 m. It was undertaken by the Soviet geologists who drilled this hole as a challenge in the Kola Peninsula, in Scandinavia. However, in 2012, Exxon Neftegas, a project company, completed the Z-44 Chayvo well, which has an astonishing total depth of 12,376 m. This depth is 15 times the height of the world’s tallest skyscraper, the Burj Khalifa in Dubai.

These are some of the deepest points both on land as well as underwater, natural as well as human-made wonders. Their depths have set new records, and scientists and explorers are further searching for more unique places with depths that can break the existing records. These are the deepest places on Earth. Kindly share and do post your comments.