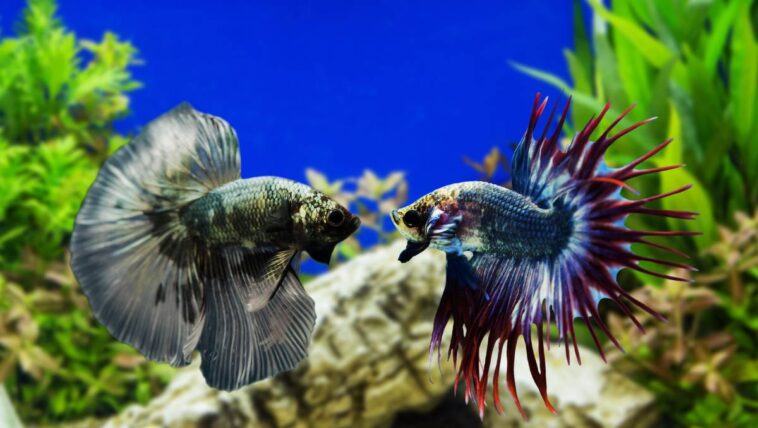 Whether you are just planning to buy a fish for yourself or you already own it, it is important that you know everything about it in order to take care of it in the right way. It is important to know as much as possible about them, especially if you plan to have more fish. In that case, we would not advise you to opt for two males in the same aquarium. Mostly the problem is their similar appearance, but only if you focus a little more on some details will you notice the difference.

Therefore, you may see determining the sex of your fish as a challenge, know that the truth is different. In fact, it is very easy to get the right answer in just a few steps. So, it is important to pay attention to some key factors such as size, fins, and tails, coloring, beard, body shape, etc. In this article, we will try to point out the significant differences between male and a female.

What is the difference in size?

One of the most noticeable features is this one. Although both sexes are the same size at the beginning of life, males become larger than females as they grow up. Spotlight should be on their back, belly, and fins. You will often see that the dorsal and tail fins are slightly longer in males due to their size. On the other hand, females will have much shorter fins. Also don’t just make a conclusion based on the size and length of the feathers, but understand this characteristic as very important. Males will have much more elongated bodies compared to females, which is why they will look thinner.

Is there a color difference between male and female betta fish?

There is no clear difference, but if you look a little closer, you will notice that males are more vividly colored than females. On the other hand, you can find females that are quite colorful, like red betta fish where both male and female are very colorful and you can click here and see for yourself. The only thing you will notice in females, not males, are the vertical stripes. They usually appear when they are ready for mating, so you can make a clear distinction between the sexes.

Can the body shape of betta fish reveal sex?

This is partly true because females are characterized by a bit shorter and more wide-bodied compared to males. Their bodies are elongated and somehow flatter because the female part of the body can remind you of a hair comb at some point. Because of their more striking appearance, there are breeders of long-haired female Betta Fish.

As you can see, all fish of this species have a beard. However, if you take a closer look, you will notice a difference in its density. While small betta fish have a large and conspicuous beard that is visible even when the gills are not closed, females do not have even half as conspicuous a beard. In fact it is barely visible, especially if the gills are not closed. So take a good look at the place under their gill plates.

Males have slightly more recognizable fins compared to females. With their appearance, females are more reminiscent of standard fish, while males attract more attention while swaying during swimming. Their fins are several times longer than females while some males have short tail fins. It is because of them that so many people are interested in owning bettas.

Are there differences in behavior between male and female betta fish?

In addition to looks, there are clear signs in their behavior that can give you an answer to your question. Many of you don’t know, but their other name for males is Siamese fighting fish and they got that name for a reason. This is exactly the reason why it is not recommended to keep two males in the same aquarium, because aggressive behavior can easily occur. However, that does not mean that it would be good to combine female and male betta fish because it is also a bad combination. Of course, the exception is the situation in which this connection is necessary due to mating.

How much more aggressive are males than females?

When we talk about this trait behavior, it is necessary to emphasize that males are equally aggressive towards each other, but also towards all other fish. On the other hand, females are not so combative and aggression between them can be quite stressful. The situation in which two females are in the same place is almost the same as with males. Chances are high that one of the two will show violence. The solution for that would be to keep five female fish because that way they will not be aimed at certain individuals.

If you have betta fish in your aquarium and you have no one to compare it to, use one popular technique. All you need is a mirror to put in the aquarium or next to it. In that case, the males will always stretch or flare their gills in order to show dominance. Of course, remove the mirror after making sure. For a long time, this can put a lot of stress on your fish, which negatively affects its health.

When it comes to bubble nests, we can say that only males blow a bubble nest. If you don’t know what kind of nest it is, it is made of saliva bubbles. They are produced by betta fish and they come to the surface of the water. It is her way of protecting eggs during reproduction. This situation cannot apply exclusively to males, as it has been proven that in rare cases females can behave the same way. Don’t let this confuse you, because this really happens very rarely, almost never. So, another thing that is characteristic of males is the creation of bubbles. This tells you to get ready to mate with the female while making nests, and they don’t even have to have a partner for that.

So, there are a lot of features that you need to pay attention to. We’re sure you’ll easily determine the sex of betta fish, only if you take a closer look. Don’t forget to observe its behavior, not just its appearance.