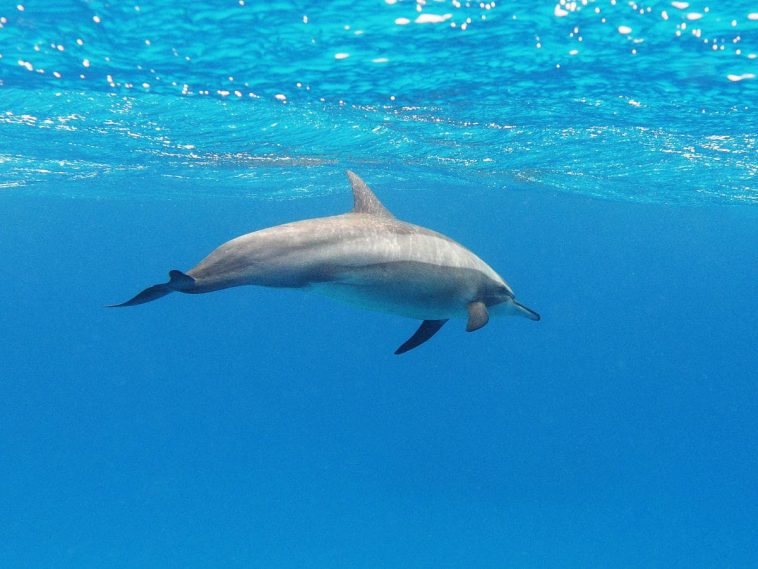 The word “Dolphin” always makes us imagine playful marine animals displaying their antics in the water. Research says that all marine mammals evolved around 50-60 million years ago from their land-based ancestors. The dolphins are among the most adapted aquatic animals. The dolphin family includes common dolphins, bottlenose dolphins, killer whales, and others. Dolphins constitute a unique group, that varies greatly in appearances and habitats. We will discuss dolphin species. Dolphins are one of the animal species that are most affectionate animals towards humans.

Dolphins have long been known for their intelligence, playfulness and social behaviour. We tend to picture dolphins as sleek and grey, leaping from the water with a clever grin. Dolphins make an extremely diverse group with over forty different species. Let’s take a closer look at the various species of dolphins.

This species of the dolphin family, the Spinner dolphin is small in size and can be found in the off-shore tropical waters around the world. It is a member of the Toothed Whales’ family. Its name comes from its skill to spin along its longitudinal axis as it leaps through the air. For this reason, the Spinner dolphins are known for their acrobatic displays. These small dolphins regularly leap out of the water and perform complicated aerial maneuvers. They can spin multiple times in one leap and are skilled acrobats.

The smallest member of the dolphin family, Hector’s dolphins are rare marine dolphins in the world. They have distinct black markings on their face, short bulky bodies and a dorsal fin shaped like a Mickey Mouse ear. One subspecies of Hector’s dolphin is Maui’s dolphin that is critically endangered. They are found only in the shallow waters along western shores of New Zealand’s North Island. Hector dolphins use echolocation to search for food and navigation. These dolphins are a protected species because of their small numbers.

Risso’s dolphin is commonly known as the Monk dolphin among Taiwanese fishermen. Risso’s dolphins can be found worldwide in all kinds of oceans and seas. They are also called grey dolphins and have numerous scars on their body. They prefer deeper offshore waters. These dolphins are not only active on the ocean surface but are also excellent divers. They have the capability to dive to as deep as 1,000 feet and hold their breath for 30 minutes underwater. They can be found in groups of 10 to 30, playfully surfing the ocean waters. They can sometimes wander solitary or even in pairs.

Ever heard of a pink dolphin? Yes, the Amazon River dolphin is also known as the pink river dolphin or the Boto. It lives only in freshwater and is found in the Amazon and Orinoco river basins. It is a species of toothed whale. The dolphins are grey when they’re young and slowly turn pink as they get older. Their pink colour is due to scar tissue. Some Amazon River dolphin males turn bright pink. Their colour gets influenced by their behaviour, diet, and exposure to sunlight. Their food consists of fish, shrimps, and crabs. Amazon River dolphins are true carnivores and can also eat piranhas and turtles!

The rough-toothed dolphin is found in the waters of the Pacific, Atlantic and Indian oceans. This species is found in deep warm and tropical waters. They are relatively small compared to other dolphins. They have a small head with a long beak and long flippers. They have a unique reptile look, with wrinkles and ridges on their teeth. They have four sections of teeth in their upper and lower jaw, where each section can have 19 – 28 teeth. They are among the most intelligent species of dolphins.

The Killer Whale or the Orcas are well-known and feared marine species. Did you know that orcas are actually dolphins? We often confuse them for being a whale because of their name ‘killer whale’. Orcas belong to the oceanic dolphin family and are toothed whales. They are highly intelligent and adaptable. They are able to communicate and coordinate hunting in groups. They are extremely fast swimmers. Killer whales are the largest and most powerful animals in the ocean. No other predator can challenge them.

Commerson’s dolphin is a small oceanic dolphin found on the southern coast of South America and around the Kerguelen Islands. They are also known as the Skunk dolphin, or the Panda dolphin because of their black and white colour. They can be easily recognized by their black and white markings. These dolphins can be often seen in the bays or near the harbours. They consume many types of small fishes, as well as cuttlefish, crabs, shrimps, and squids.  They can often swim upside down and feed in this position as well. Swimming upside down gives these dolphins the advantage to hold their prey from below. They spend most of their time in the shallow waters.

Another very active member of the Dolphin species is the Pacific White-sided dolphin. It is found in the cool to temperate waters of the North Pacific Ocean. They are playful and highly social marine mammals. Their name is derived from the fact that these dolphins have a white colouration on their sides and under their belly. They have a short, rounded, thick beak. Their mouth contains 23-32 small, rounded, curved teeth on each side of the upper and lower jaws. Pacific White-sided dolphins are known to use whistle-like vocalizations to communicate among themselves.

These are some of the popular dolphin species occurring all over the world. Generally, very playful and social creatures, almost all the dolphin species travel in groups and can be seen leaping in and out of water. They are extremely intelligent animals, and except for Killer whales, they are very friendly with humans.