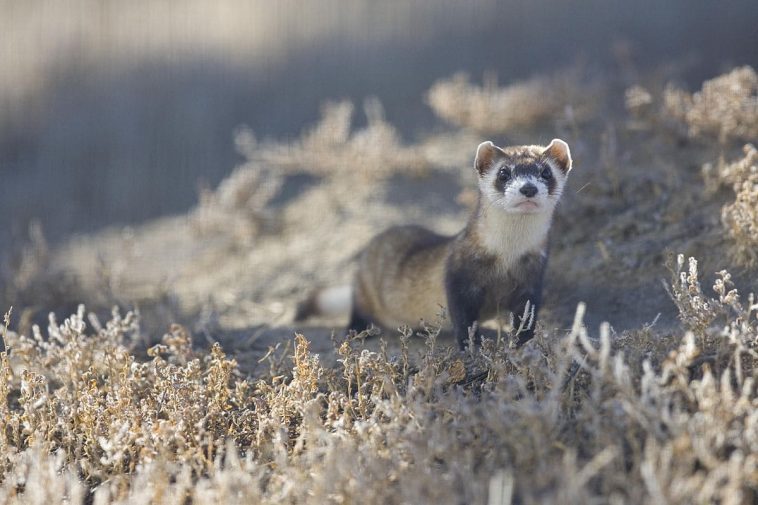 Various species of fish, wildlife, and plants in the United States have become extinct as a consequence of economic growth and development. Lack of adequate concern and conservation has led to the depletion of many animal species. These poor animals are now in danger of extinction. Endangered species are animals that are in immediate danger of becoming extinct. Significant reduction in population size of a large percentage over recent years with a continuing decline is a major cause of concern for the WWF. Pollution, habitat destruction and industrialization has caused many animals species to become endangered. Below we present a list of endangered animals in the United States.

Endangered Animals in the United States

The Red wolf with reddish-brown colour to its furry coat is a native of Southeastern US. It mostly inhabits the coastal marshes in the prairie regions of America. It is a cross of a coyote and the common grey wolf and has white markings on its face. It more or less resembles a greyhound, with long limbs and ears. This animal is now in very fewer numbers and has been listed by the International Union for Conservation of Nature or IUCN on the “Critically Endangered Species” list. Losses of habitat and predator control programs on an extensive scale have considerably reduced the population of these red wolves. It is one of the endangered animals in the United States.

Another remarkable species from the cougar family, the Florida Panther dwells in the hardwood forests and swamps of Florida in North America.   Shrinking habitats and human encroachment over the years have caused a reduction in their population and they are now an endangered species. There are just 120-200 panthers that remain in South Florida now. They are territorial big cats who can travel over long distances in the Florida Mountains, especially in Big Cypress National Preserve and the Everglades National Park.

It is one of the endangered animals in the United States, The Bryde’s whale comes from the same family as the blue whales and humpback whales. They can reach up to 55 ft in length and mostly inhabit the tropical seas, especially the Northern Gulf Of Mexico. These whales are baleen whales and get their name from Johan Bryde, a businessman from Norway, who set up whaling ports and extensively indulged in whale hunting and sale of their oil and blubber. Commercial whaling during the 1970s and frequent collision by ships resulted in a decline in their numbers and they are now a Protected species.

The North Atlantic right whale is a large baleen whale species. Sadly, only about 400 whales are remaining now. They are black, with a V-shaped mouth and have no dorsal fin but paddled flippers. Commercial whaling, entanglement in fish gear and ship collisions have led to their high mortality rates in the North Atlantic Ocean. These whales are now on the red list of IUCN as an endangered species.

This is rare species of turtles found primarily found in the waters of the Atlantic off the eastern coast US and Mexico in the Atlantic Ocean and the Gulf of Mexico. The turtle was hunted fiercely for its meat that led to a vast reduction in its population. Loss of habitat, water pollution and poaching has caused a loss in their numbers, and they now feature on IUCN’s list of the critically endangered species. It is one of the endangered animals in the United States.

This is a beautiful reindeer species with grey-brown coats found in the McKenzie Mountains. The woodland caribou has designated a ‘threatened’ species due to direct habitat loss, degradation and fragmentation. They inhabit the forests and marshes and river regions of the North-West territories. These large and powerful caribous are now low in numbers.

This is a large vulture species that are large scavenger birds. They have a large wingspan of up to 3 m. This condor actually became extinct in 1987. It was then re-introduced in Arizona and Utah and bred at the San Diego Wild Animal Park and the Los Angeles Zoo under a conservation plan. Habitat destruction and poaching has led to the decline of this rare species and they are also listed on IUCN’s Critically Endangered List.

It is one of the endangered animals in the United States, San Joaquin kit fox inhabits the San Joaquin Valley and much of Central Californian grasslands. These foxes are about the size of the house cats and have big ears and long legs. Habitat loss due to rapid industrialization and extensive use of pesticides in the grasslands has resulted in a loss in their numbers. Even after nearly 50 years of being on the Endangered Species List, this species is still endangered.

These are large and beautiful butterflies in North America, with brilliant orange-red wings, black veins and white spots. They are the only known butterflies that migrate up to 2,800 miles from the United States and Canada to central Mexican forests. Climate changes have disrupted the monarch butterflies annual migration pattern. There have been abnormal patterns of drought and rainfall in the U.S. and Canada breeding sites that have resulted in the death of thousands of Monarch butterflies. However, WWF has now come up with a wildlife conservation plan in Mexico’s Monarch Butterfly Reserve to save this species.

The Black-footed ferret is also popular as the American polecat or prairie dog hunter. This species is native to central North America. These ferrets have a brown furry body with black feet and a black mask on their face. These animals mostly stay underground and come out at night to prey. It is listed as endangered by the IUCN, as only about 350 such ferrets are left in the world now.

Besides these animals, the Lesser Prairie chicken, the Columbia Basin Pygmy Rabbit, Ramsay Canyon Leopard frogs and the Giant Sea Bass are also on the list of endangered animals in the US. Threats from climate change and human activities have pushed several animals to extinction. It becomes a matter of prime concern now to start protection and conservation of these animals plus several other species that are on the verge of becoming endangered.