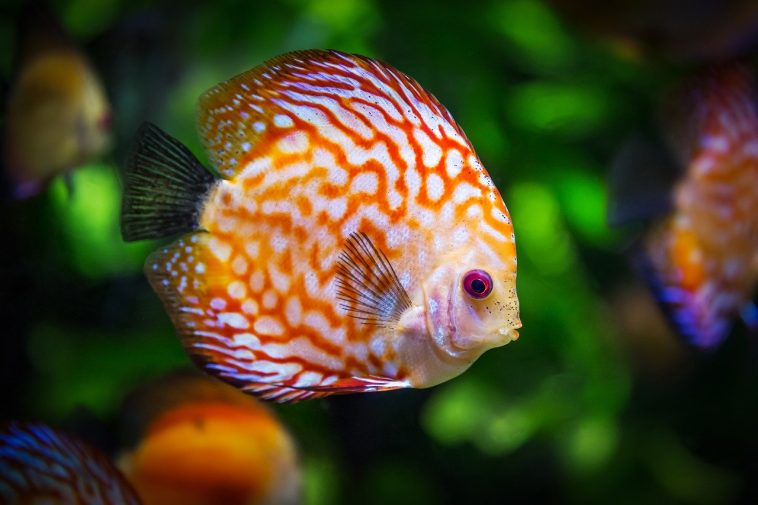 Nature is full of treasures of beauty and marvel. Fish are among the most beautiful and peaceful marine creatures. You can find a mystic variety of over 30,000 fish all over the earth in various sources of water-ponds, lakes, rivers, seas and even the mighty oceans. Fish are vertebrate animals that live in the water i.e. they have a central spinal cord that is surrounded by bone or cartilage structures. Fish are naturally equipped with features that help them to survive in aquatic surroundings. They have gills that extract oxygen from the water around them and help them to breathe. The world of fish is full of hundreds of varieties of fish. Finfish have gills, are covered in scales, and reproduce by laying eggs. Eels have worm-like slimy bodies. Lungfish gulp air. Whale sharks, the largest fish, give birth to live young ones. Fish thrive in a variety of ecosystems all across the globe in varying shapes, sizes and colors. You can find the Antarctic Icefish, which have antifreeze in their blood, living permanently at -1°C, and also fish like catfish that survive in mildly warm water climate as well. Below we will explore the top 10 facts about fish that make them all so very special.

Being aquatic animals, the fish are subjected to attack by predators as well. They are gifted with special senses to protect and keep them secure. Fish depend less on their vision and more on their hearing, taste, and smell. They make use of the properties of water in which they live- water can transmits sounds, it can disperse chemicals, and can also conduct electricity. Many fish can detect motion in the water using a special row of scales with sensors known as the lateral line. Others can detect electrical charges to find their prey and even navigate.

Fish are very old on the evolutionary scale. According to fossil records, they have been on Earth for more than 500 million years. The evolution of fish began about 530 million years ago, when the Cambrian explosion came about, in the Cambrian period when most major animal phyla appeared in the fossil record. Fish may have evolved from an animal similar to a coral-like sea squirt or a tunicate, whose larvae resemble early fish in important ways.

3. Support a variety of habitats

70 % of the earth is covered in water. The fish live in a variety of habitats ranging from coral reefs and forests to rivers, streams, and the huge ocean. Fish live in almost all aquatic habitats. Different species of fish have different adaptations for different habitats. Fish are living in rocky shores, coral reefs, rivers and streams, lakes, and ponds, under sea ice, the deep sea, and other environments of fresh as well as salty water.

The scales of a fish are small hard plates that grow out of the skin of a fish. These protective scales cover the skin of most fish. These scales provide effective camouflage by reflecting the light falling on them and generating multiple colored images. They also help the fish to cut through water and swim. They protect the skin of the fish from attacks by predators, parasites, and other injuries.

Reef fish use their colour for camouflage for defence and to warn enemies and predators. Some fish use camouflage features like the stripes and spots of colour that appear on fish. They can highlight or camouflage those parts of the body that are easily recognized by the enemies (or prey, if it is a predator). Coastal water fish have streaked hoops that camouflage the fish in shallow waters where the waves break the rays of sunlight, leaving streaks of light and shade on the seabed. Fish living in reef colonies have horizontal lines and vertical or contour lines that help the fish to blend in with the reef landscape.

Fish can form groups called “schools” containing millions of fish.  They have a specialized sense organ system called their lateral line, which works much like a radar. They use their eyes and the lateral line to hold their places in the school. The lateral line can be used to detect movement, vibration, and pressure in the surrounding water. The lateral line has a collection of pores that run along the fish’s sides from head to tail. The fish can sense changes in water pressure from the movements of other fish or predators by special hairs in the pores.

Fish uses a variety of low-pitched sounds to convey messages to each other. They can make all kinds of weird sounds to communicate with their friends- grunt, croak, hiss, whistle, shriek, and wail. They rattle their bones and grind their teeth. However, fish do not have vocal cords. They use other parts of their bodies to make noises, like muscles that can vibrate against their swim bladder.

8. Some fish can live outside water also!

Lungfish are the special type of fish that can live out of water for several years. This special creature is equipped with both gills and a lung.  It secretes a lot of mucus, and builds a cocoon and burrows itself in that. This fish can take in air with its lungs through a built-in breathing tube. The mudskipper can also spend most of its time out of the water by walking on its fins. It can breathe through the pores of its wet skin.