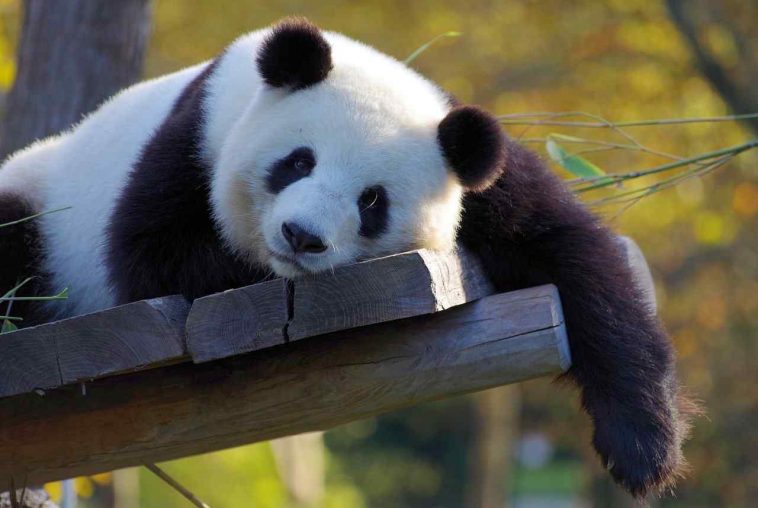 We all recognize Giant Pandas as the big, furry, black and white bears, eating bamboo shoots. The giant panda belongs to the bear species and is native to south-central China. It can be recognized by the large, distinctive black patches around its eyes, over the years, and across its round body. The giant panda is a rare member of the bear family. It is among the world’s most threatened animals. Giant pandas are cute and harmless and have an amusing habit of sneezing.

1. They have a great appetite

The giant panda has an insatiable appetite for bamboo. A typical Giant Panda eats half the day, which is a full 12 out of every 24 hours. It relieves itself dozens of times a day.  A giant panda’s daily dietary needs are very high. It has elongated wrist bones that function like thumbs and it hungrily plucks the bamboo stalks with them. Pandas can eat birds or rodents as well. They can devour 14-28 kg of bamboo per day.

The giant pandas spend as long as 14 hours of eating per day. A giant panda needs food in a quantity that is approximately 40% of its weight per day. They eat for about half a day and spend the rest of their time in sleeping. In the wild forests, the giant pandas need to sleep for 2 to 4 hours between its two meals. Its favourite sleeping poses include lying flat on their backs. They follow a low-energy diet and avoid stressful situations and exertion, preferring solitary living.

Wild pandas are only found in the remote, mountainous regions in Central China. They love to dwell in the cool and high bamboo forests. They may climb very high, as much as 13,000 feet, to feed on higher slopes in the summer season. Pandas love to eat in a relaxed sitting posture, with their hind legs stretched out before them. They may appear lazy but they are skilled tree-climbers and efficient swimmers. They can climb trees from 7 months old.

They are solitary creatures and love to stay alone. Panda families don’t live together. They are solitary, and each female panda stays in a well-defined range. Males generally do not live together, except for in the short breeding season. This season lasts from March to May, when they compete for female attention. Females raise the cubs alone.

Unlike most other bears, pandas do not hibernate during winter. In winter, they move down to lower mountains for warmer weather. One reason is that they mostly eat bamboo which doesn’t have much nutritional value and does not make them fat enough.

6. Pandas have 6 toes to hold bamboo

These animals have an unusual foot structure. A panda’s paw has six toes—five fingers and an opposable pseudo-thumb. This is an enlarged wrist bone it uses, which is used to hold bamboo while eating. The hind feet of the giant panda does not have a heel pad found in the other seven bear species. Their paws also have a heel or a carpal bone. This is what makes a panda unique from other bears.

Giant pandas became endangered in 1990 due to excessive poaching in the 80s. Excessive deforestation depleted their bamboo food source. Sadly, these beautiful bears have now become endangered. It is estimated that only around 1,800 remain in the wild. We should put in our efforts to keep them safe and secure. WWF is committed to conserving the species and its habitat and has increased the number of panda reserves. In 2016, because of their consistent efforts, the giant panda was removed from the endangered list. It is now on the “vulnerable” list of animals. This is one of the saddest facts about giant pandas.

8. They are emblems of the global diversity

The giant panda was selected and used as the symbol of the WWF since its formation in 1961. The WWF logo has been inspired by Chi-Chi, a giant panda brought to the London Zoo in 1961. WWF in collaboration with the Chinese Government has focused on improving panda habitat by striking a conservation balance conservation with local sustainable development.

All pandas are born very small. The average weight is 100g, which is only 1/900 of their mother’s weight. Newborn giant pandas are pink and furless. The typical black and white coloring comes later, after about 3 weeks. Cubs are very weak and vulnerable at birth. They are born furless and blind. The limbs of newborn pandas are very weak and they are not able to stand at all.

Giant Pandas leave scent markings on the habitat, as a means of communication. By using these scents, they can find their previous partners during the mating season. After finding their partners, they communicate with a different sound, which is barely understood by humans. The giant pandas also leave their glandular secretions on trees or the ground in their habitats. They use it to mark their territory and gather together or stay away from stronger competitors. Otherwise, pandas remain silent when playing. We can predict their behaviours simply by their sounds.

These are the top facts about Giant Pandas. Overall, they are shy and quiet creatures and are adorable, solitary animals.