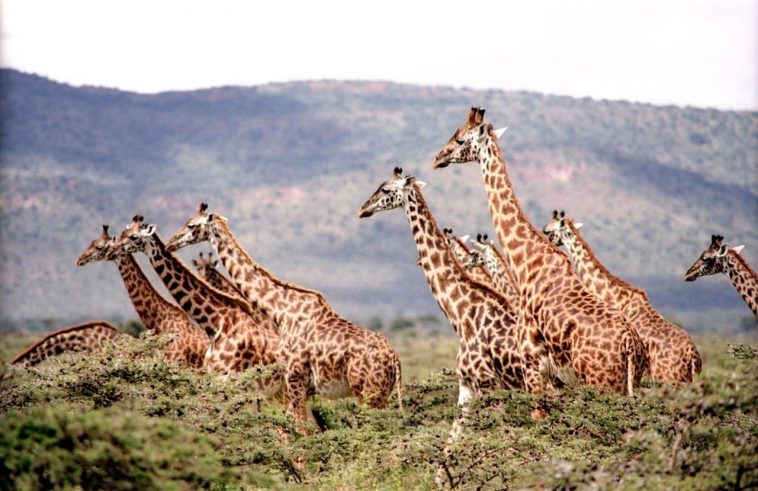 Giraffes are the world’s tallest living terrestrial animal. They have always intrigued humans because of their heights, appearance and strange habits. The giraffe is not a single species, but its species consists of four distinct species. This includes – the Northern Giraffe (Giraffa camelopardalis), Southern giraffe (Giraffa Giraffa), Reticulated Giraffe (Giraffa reticulata) and Masai Giraffe (Giraffa tippelskirchi). Giraffes usually inhabit savannahs and open woodlands of the African region. A group of giraffes is called a ‘tower’ or a “herd” as well. The giraffe has chief distinguishing features like its horn-like ossicones and its distinctive coat patterns, along with its extremely long neck and legs. Below we present the top 10 facts about giraffes that will help you know better about them.

1. Giraffes are the tallest land animals

These gentle giants are the world’s tallest living land animals. The giraffe can grow up to a height of around 4-5 m high. Tallest giraffes have recorded heights up to 5.9 m. Such a large animal weighs 800- 1900 kg- which is quite heavy in itself.  A giraffe is prone to attack by predators, such as lions and hyenas. The tall height is helpful for keeping a lookout for its enemies.

Giraffes usually walk at a slow relaxed pace at the speeds up to 10 mph. When there is a potential threat, they can speed up. In such situations, these quiet animals are capable of reaching speeds of up to 35 miles per hour. However, they run out of air quickly and have to take a break as their long necks make it difficult to run. A giraffe has a maximum speed of up to 37 miles per hour. The animal can usually keep this speed up to a couple of miles.

4. Each giraffe has a unique set of giraffe spots

Just like human fingerprints; no two giraffes have the same pattern. Researchers say that giraffes can be uniquely recognized from their skin patterns. The coloured skin patches on a giraffe’s body not only help them to camouflage but also act to dissipate heat around the body. The temperature of the skin is slightly higher in darker regions, which helps in dilating the blood vessels beneath the skin’s surface.

Giraffes usually sleep standing, sometimes sitting. When giraffes feel the need to sleep, they can curl their necks and sleep for about five minutes at a time. They do not sleep for more than 30 minutes a day. They have the shortest sleep requirement in the entire animal kingdom to prevent them from falling prey to predators in the wild.

6. Giraffes actually walk on tiptoe or are “ungulates”

Giraffes are even-toed ungulates, which means they have two weight-bearing hooves on each foot. Hooves are altered nails/claws. Hooves provide strength and protection for grazing animals that needed support for their toes on hard ground for a very long time. Unlike humans whose limbs extend into five digits, ungulates have lengthened and compressed their long bones at the ends of their hands and feet. This means that they actually walk on tiptoe.

7. Giraffes have a “heavy heart”

With massive body weights of about 800-1200 kg, a giraffe’s heart can weigh approximately 11 kg. This makes it the biggest heart of any land mammal.  Every minute, it can pump 60 litres of blood around the giraffe’s body. A giraffe’s blood pressure is twice that of an average human. Giraffes thus have quite a heavy heart.

This is quite interesting to know that a giraffe’s feet are the size of a dinner plate with a diameter of 30 cm! Giraffes have great body weight and they can easily sink in the sand or the muddy ground beneath. But these huge hooves prevent giraffes from sinking into loose sand despite their great weight.

9. They are the biggest pollinators in the world

Because of their great heights; giraffes can easily reach to the top of trees. They can inadvertently transfer genetic material on their muzzles from the flowers of one tree to those of another, as they wander around feeding on the tops of trees.

10. The number of giraffes in the world is fast declining

It’s a startling fact, but yes, giraffe populations are declining. They’re being considered for ‘endangered’ status. As per IUCN estimates, their population has suffered a decline of 36-40% from 1985. Loss of habitat, habitat fragmentation, and degradation, extensive growth in the human population, poaching, disease, war, and civil unrest threaten the remaining giraffe numbers and their distribution throughout Africa. This has led to a decline in the number of giraffes today.

These are the top facts about giraffes.