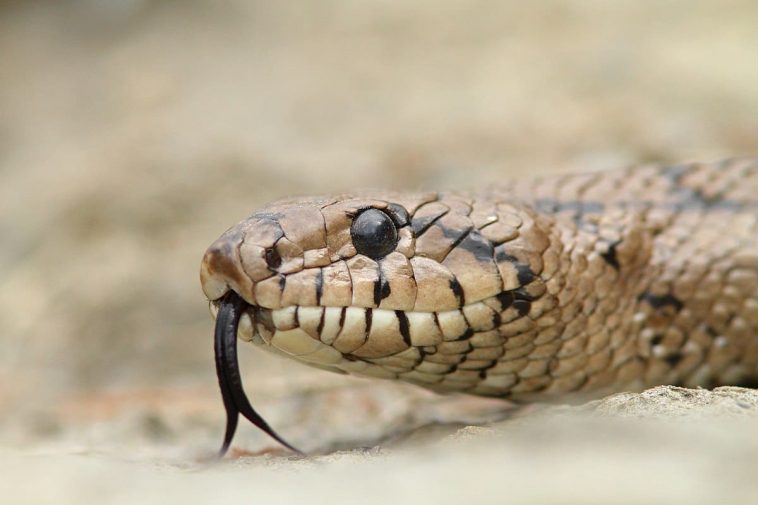 Snakes are carnivorous reptiles that do not have legs and slither on the ground. They are among the most frightening creatures on earth, whose mention itself spells fear and danger. Even snakes have many enemies. Many animals like large birds, wild boars, mongooses, raccoons, foxes, coyotes, and even other snakes hunt snakes for food. There are about 500 categories and 3,000 different species of snakes. All of them are predators. Snakes require lesser quantities of food and only 6–30 meals each year are sufficient for them to be healthy. Below we present some interesting facts about snakes.

1. Snakes Can Eat Food Bigger Than Their Heads

Snakes cannot chew, so they must swallow their food whole. Snakes are capable of stretching their mouths very wide. They have a very flexible lower jaw. Snakes can eat other animals that are much bigger than their own bodies. A snake can digest its prey fast if it has a warmer body. A snake takes 3–5 days to digest its meal. Large snakes like the anaconda can take weeks for digestion.

2. They Inhabit The Whole World Except Some Countries

Snakes are a very common variety of reptiles which are present in almost all corners of the world. New Zealand is one of several large islands around the globe where there has never been any kind of snakes. The other places are Antarctica, Iceland, Ireland, and Newfoundland. Alaska and Hawaii are also snake-free regions.

3. They Have Internal Ears

Snakes do not have visible ears like other animals. This does not mean they are deaf. They don’t hear sounds as we do. They have ears as a vestigial organ inside their heads. Their hearing setup is attached to their jawbones. They can feel vibrations very well and may hear low-frequency airborne sounds as well. Studies have shown that snakes can hear sounds in the 80-600 Hz range, with some species hearing sounds up to 1000 Hz.

4. Some Snakes Are Dangerously Venomous

5. Snakes Have Teeth And Fangs

Some snakes have over 200 teeth. Most snakes have teeth that occur in four rows on the top and two on the bottom of their mouths. The teeth aren’t used for chewing. Their teeth point backwards to prevent prey from escaping the snake’s throat.  Anacondas, pythons and other constrictors which are non-venomous have backwards-facing rows of teeth. The number of teeth is 50 or more so that once the prey is being swallowed it cannot slip out of its mouth.

But not all snakes have fangs. Only the poisonous snakes have fangs. Fangs are sharp, long, grooved teeth that are connected to a small sac in the snake’s head behind its eyes. These sacs produce a poisonous liquid called venom. A snake’s fangs usually last about 6–10 weeks. Fangs can grow back as well. A snake known as the Gaboon Viper has the longest fangs of any snake, reaching about 2 inches in length.

6. Some Snakes Can Fly

Flying snakes are found in Southeast Asia, southernmost China, India, and Sri Lanka. They are mildly venomous and their venom is dangerous only to their small prey. There are five recognized species of flying snakes. These snakes can grow up to 4 feet, and some types can glide up to 330 feet through the air. Flying snakes do not actually fly but glide. They use the speed of free fall and their body contortions to catch the air and generate a lift. They use their flying and gliding skills to escape predators. They move from tree to tree to hunt prey.

7. Snakes do not have eyelids

Snakes do not have eyelids; they cannot blink and they sleep with their eyes open. When a snake sheds its skin, it must also shed its eye scales, because a snake’s eye scales are part of its skin. The eyelids of a snake are a single transparent scale called a Brille that protects their eyes. It is a thin clear membrane. Most snakes can see a moving object very well. Snakes have the ability to close their retina when they are sleeping. Some snakes have round pupil like humans and others have a vertical slit on their pupils.

8. Some Snakes Can Be Two-Headed

Two-headed snakes are not fantasy. They typically occur in the same way that Siamese twins do. Polycephaly is the condition of having more than one head in living beings. This happens when a snake’s developing embryo begins to split into identical twins. However, the process stops mid-way, leaving the twins joined. Just as Siamese twins can be joined at the head or the hip, snakes can be joined at varying places on their bodies.

The fear of snakes is known as Ophidiophobia or Herpetophobia. It is one of the most common phobias worldwide. Approximately 33% of adult humans are ophidiophobic, which shows that humans have an innate, evolutionary fear of snakes. People suffering from this phobia can show symptoms of anxiety attacks, screaming, crying, and difficulty in breathing, shivering and rapid pulse rate.

The heaviest snake in the world is the anaconda. It weighs over 270 kg and can grow to over 9m long. It has been known to eat caimans, capybaras, and jaguars. The Brahminy Blind Snake, or flowerpot snake, is the only snake species made up of only females. The Death Adder, which is a native to Australia, has the fastest strike of any snake in the world about 0.15 seconds. St. Lucia Racer, with less than 20 such snakes existing today, is the rarest and endangered snake species in the world.

These are some interesting facts about snakes.