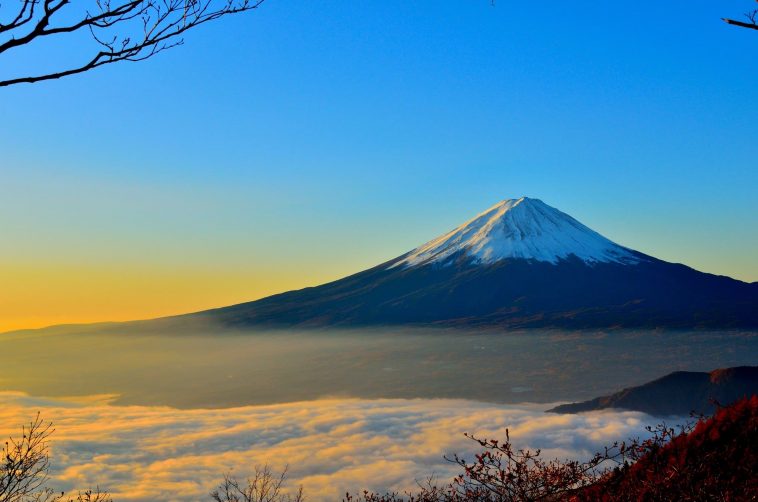 Volcano comes from the name of the Roman god of fire, Vulcan. It is an opening in the Earth’s surface and when they are active they can let the ashing gas and hot magma from these holes. These eruptions can be violent and spectacular usually happen at a regular interval of time. Some of the modern-day famous volcanic eruptions are Mount Krakatoa in 1883, Novarupta in 1912, Mount St Helens in 1980 and Mt Pinatubo in 1991 Let me list down 16 famous volcanoes in the world,

Mount Vesuvius is an active volcano in the Gulf of Naples, in southern Italy and has erupted several times. It is most well known for the eruption that occurred in 79 AD when the resulting eruption emanating a cloud of volcanic gases, ashes and rocks, destroyed and buried the Roman towns of Pompeii, Stabiae, Oplontis and Herculaneum and which released thermal energy which was 100,000 times more than that released during Hiroshima-Nagasaki atomic bombings. It is one of the famous volcanoes in the world.

Ever since then, Mount Vesuvius has erupted several times with the last eruption occurring only a hundred years ago. It is regarded as one of the most dangerous volcanoes in the world, as nearly 3 million people residing in the vicinity of the volcanic mountain will be affected and around 600,000 people reside in the ‘danger zone.’ Mount Vesuvius is prone to explosive eruptions and the adjoining volcanic region is the most densely populated in the world.

Krakatoa is a caldera (a hollow that is formed after the emptying of the magma chamber in a volcanic eruption) in the straits between the islands of Java and Sumatra, Indonesia. The eruption that occurred in 1883 is among the deadliest volcanic eruptions recorded in human history. The eruption destroyed 70 per cent of the island of Krakatoa and the adjoining archipelago.

The explosion was heard in far off places like Australia and Mauritius. The explosion had an energy which was 13,000 times more than that of the atomic bomb dropped at Hiroshima.  Eruptions have led to the emergence of a new island known as the Anak Krakatau or the “Child of Krakatoa.” The eruption and collapse of the Anak Krakatau volcano are responsible for the deadly tsunami which occurred in 2018.

One of the famous volcanoes in the world, Mount St Helens is an active volcano located in the state of Washington, United States of America. It is part of the Pacific Ring of Fire which includes over 160 active volcanoes. The most infamous eruption occurred in 1980 and it was the deadliest volcanic eruption in US history which resulted in physical destruction, loss of life and economic problems. Around 57 people were killed as a result of the explosion.

A landslide which was triggered by an earthquake of magnitude 5.1, resulted in a lateral eruption. The then US President Ronald Reagan established a National Volcanic Monument for carrying out scientific studies as well as for the purposes of recreation. Visitors have been allowed to climb the summit of the mountain since 1986.

Mount Tambora is an active volcano in Sumbawa, an Indonesian island. Prior to the volcanic eruption of 1815, Mount Tambora was the highest peak in the Indonesian archipelago, with a height of 4,300 metres. The eruption in 1815 is the largest to have occurred in the Holocene ( 10,000 years ago to the present). Volcanic ash rains had occurred in far off islands such as Borneo, Java, Maluku and Sulawesi.

Moreover, the resulting eruption reduced the elevation of the mountain peak to a height of 2,850 metres. It is estimated that about 71,000 people died as a result of the volcanic eruption. The year 1816, came to be known as “The Year without Summer” which impacted the climatic conditions in the northern hemisphere, particularly in Europe, where it resulted in failed harvests and famine.

Mauna Loa is one of the five volcanoes that constitute the island of Hawaii. It was considered for a long time to be the largest volcano in the world until more information was obtained about the Tamu Massif submarine shield volcano. The eruptions from Mauna Loa tend to be non-explosive as they have poor amounts of silica and are quite fluid. Mauna Loa has been erupting from the past 700,000 years and emerged onto the surface around 400,000 years ago. The most recent eruption occurred in 1984. Due to the dangers posed by this volcanic mountain to the nearby population, it is part of the “Decades Volcanoes” project that aims to study dangerous volcanoes.

Eyjafjallajokull which translates as Island Mountain glacier in Icelandic is a volcano with an elevation of and is completely covered by an ice cap. The last volcanic eruption occurred in 2010, which was quite small, but enough to cause flight disruptions and suspend air travel across western and northern Europe due to blankets of ash clouding the sky. The residents of Iceland were less concerned about the clouded skies and were more worried about flooding, as the volcanic eruption had melted the ice. However, the melted waters found their way to the rivers. The farmers had also feared that the ash on their farms would result in bad crops, but the warmth and nutrition from the ash allowed for the crops to grow well.

Mount Pelée which means Peeled mountain in French is an active volcano in Martinique, a French Caribbean island. It is about 1,371 metres in height. Since the last eruption in 1932, the volcano has been dormant. The eruption in 1902 destroyed the town of Saint Pierre, leading to the deaths of around 29,000 to 30,000 people within a span of a few minutes. The devastation caused by the eruption was so tragic that the term plan has now become part of volcanic vernacular to describe eruptions involving ash, gas and fiery clouds. The event is regarded to be the worst volcanic disaster of the twentieth century.

Mount Pinatubo is an active mountain in Zambales mountain in the Philippines. It is heavily eroded and obscured from view by dense forests. The eruption in 1991 was the second-largest eruption of the 20th century, This was simultaneously accompanied by a typhoon which brought a deadly combination of ash and rain to the nearby areas, leading to the evacuation of thousands of people. The eruption also released vast quantities of sulphur dioxide, minerals and toxic metals into the atmosphere, even more than the eruption of Krakatoa in 1882. The subsequent months saw a global layer of sulphuric acid haze, a drop in temperatures by 0.5 degrees and an increase in the depletion of the ozone layer.

Nevado del Ruiz is an active volcano located near Bogota, Colombia. The most recent eruption occurred in 1985 when colossal lahars (mud and debris flows) buried and ravaged the town of Armero, which led to around 25,000 deaths. The volcano is covered by glaciers and is part of the Los Nevados national park. It is estimated that further eruptions can put around 500,000 people residing in neighbouring villages and towns at risk from lahars. Nevado del Ruiz lies within the Pacific Ring of Fire, a region that consists of some of the world’s most active volcanoes. It is one of the famous volcanoes in the world.

The volcano at Thera (now also known as Santorini), an island off the coast of Greece, is believed to have caused the largest volcanic eruption in recorded history and lead to the demise of the Minoan civilization, around 3500 years ago. The eruption was four times that of Krakatoa in 1883. Contemporary Egyptian records describe devastating rainstorms which are ascribed to the climatic changes occurring as a result of the Theran volcanic eruption. This volcanic eruption also serves as the basis for the “Myth of Atlantis.”

Mount Fuji is one of the most beautiful and famous volcanoes situated 100 kilometres southwest of Tokyo. Also known as “Fuji-san,” It is also the highest peak of Japan with an elevation of 3,776 meters. For the Japan people, it is also one of Japan’s “Three Holy Mountains, the other two are Mount Tate and Mount Haku. This is famous as a Japan historic site with a Special Place of Scenic Beauty. The shape of the volcano is a cone which is very unusual for a volcano. One of the monks of Japan was first one to climb Mt. Fuji in 663 and the first women to ascent was Lady Fanny Parkes in 1867.

Mount Kīlauea is an active shield volcano situated in the Hawaiian Islands which was erupted in between 1983 and 2018. It is on the southern part of the island which is approximately 210,000 and 280,000 years old and believed to have emerged above the sea level around 100,000 years ago. The volcano erupted continuously between 1983 to 2018 and causes considerable damage to the property in the town of Kalapana and Kaimū along with the renowned black sand beach in the year 1990.

Mount Kilimanjaro is one of the tallest mountains in Africa and quite famous among hikers since it is considered as easiest among all seven summits (Everest, Aconcagua, Denali, Kilimanjaro, Elbrus, Carstensz Pyramid). The mountain is also the world’s tallest free-standing mountain which is a result of the volcanic activity. These volcanoes formed when molten rocks erupt and piles upon the surface during the course of time. The stratovolcano is not dead yet it is in a dormant state which means If the volcano has not erupted in the last 10,000 years but scientist think it will erupt again.

Mount Rainier is one of the most famous volcanoes that includes rugged mountain peaks and beautiful wildflowers that usually bloom in the green valleys. Mount Rainier is a part of 5th national park of the USA that was established in 1899 and around six American tribe share history with Mount Rainier. Just like Mount Kilimanjaro, this is also a stratovolcano that has a potential of erupting again.

Mount Stromboli has the name because it is situated on a small island in the Tyrrhenian Sea and it is one of the three active volcanoes in Italy. It is an active state with some minor eruptions that can be seen in many parts of the island and hence it is also known as “Lighthouse of the Mediterranean”. The major eruption was on 13 April 2009. It stands at an elevation of 926 m above the sea level and has three active craters at the peak.

Mount Misti is one of the famous volcanoes situated in Peru is a stratovolcano of andesite, dacite and rhyolit. It is also known as Putina or Guagua Putina situated near the city of Arequipa in Peru. The volcano stands at 5,822 metres (19,101 ft) above sea level and located in between mount Chachani and Pichu Pichu. It last erupted in the year 1985.