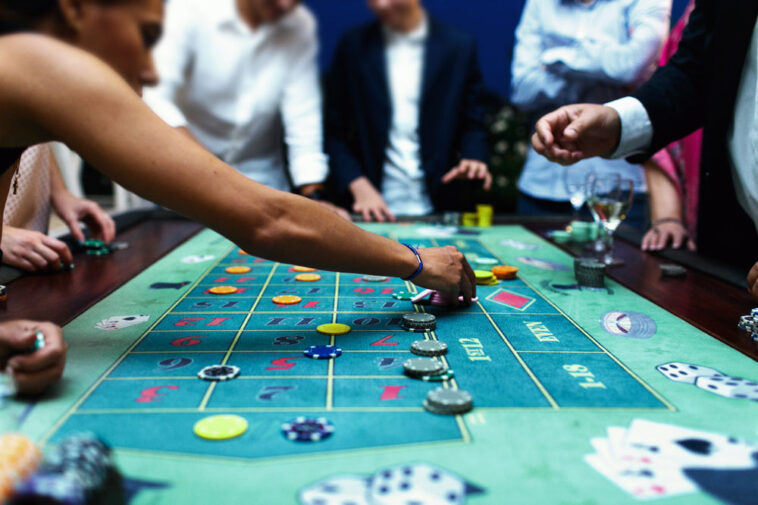 Gambling has been around for quite a while. People always used to gamble in Europe, and gambling has dated as far back as Ancient Egypt, if not even further. However, modern gambling is fairly new.

But, when we think of gambling, as it is, we have to question how it got to where it is now in the United States.

Once upon a time you could gamble only at specific establishments, but now, in many states you can gamble in a Casino, or even on your couch on sites such as Fanduel.com and more!

How did we get to where we are?

The first Americans to gamble on US soil were the British-American colonies that came with the first settlers.

The attitudes about gambling would vary per community, but there were little to no restrictions around gambling at this time.

However, by the 1680s, upper class Virginia had cemented their specific economic status with an iron grip on gambling in the form of the horse races. Many hardcore bettors would demonstrate skill and courage, yet it also came with a sense of value and consciousness in the social elitist.

There was a code of honor in individualism, personal relationships, materialism, and acquisitiveness, in a sense, the right to be a ruler.

There were around 392 lotteries held in each of the 13 colonies that used newspaper advertising, they were for entertainment and for assistance in funding each of these colonies.

Lotteries were the original form of gambling that took place, they were often used at federal and state level in America pre-revolution, and New Orleans was quick to arise as the gambling center of the nation.

However, a fast wave of hostility against gambling started in the revivals of religion in the second and third Great Awakening.

Moralists often concentrated on the legislators per state to pass laws against gambling, horse racing, pleasure halls, and working on a Sunday.

In spite of the many attempts at restrictions, gambling is greater in many communities.

Eventually, gambling became illegal and it was eventually forced to relocate to safer areas such as New Orleans, or on riverboats on which the captain of the vessel was the only law.

These same anti-gambling movements ended up shutting down lotteries, and eventually railroads took the place of riverboats as a form of transport and more venues closed down. This increased the pressure of legal prohibitions taking place against gambling.

This created both risk and opportunity for the illegally operating gambling scene.

Later on, during the California Gold Rush of 1848 to 1855 many young ambitious prospectors around the world looked for gold and to gamble, these were the two sides of their manliness.

Then by the 50s, there was a new host of ambitious prospects in San Francisco, which had overtaken New Orleans as being the most infamous city, and as the gambling capital of the United States.

Eventually, though, respectability started to kick in and California eventually strengthened its laws against gambling and eventually games ended up going underground.

Gambling became very popular on the frontier as the West became settled, with most people partaking in games of chance. Towns at the end of cattle trains like Dodge city, Kansas and so on were often famous for having a series of lavish gambling houses.

The local elite of the time were frontier gamblers, meanwhile riverboat gamblers would be dressed lavishly with a smart dress sense and refined respectability

In The 19th Century

As the 19th Century came around horse racing became an expensive hobby for those who were swimming in dollars, especially in the Southern States, yet the Civil War was destructive to the affluence related to it.

Eventually horse racing made a comeback in the North east under the lead of some very elite jockey clubs which operated at elite racetracks.

It became a spectator sport, with an affluent audience, and some struggling working class gamblers hoping that their winnings may change their lives.

As it went on, racetracks controlled the gambling situation to prevent any fraud and keep the sport an honest one.

Off the tracks, bookmakers would rely on communication systems such as the telegraph and runners which attracted more of an audience.

Yet, the bookmakers always insisted that odds at the track were set honestly.

In The 20th Century

Some of the segregated neighborhoods in some larger cities which started up in the 19th century started to become the main scene for many underground number gambling games which would be controlled by criminals who would pay off the local policing forces.

These places operated inside “policy shops” which would usually be at a saloon, in which bettors would pick numbers.

In 1875, there was a report of a selected committee of the NY State Assembly saying that the worst and lowest form of gambling took place in New York and was known as policy playing.

It was a popular form of gambling, also known as the ‘Italian Lottery’, or in Cuban communities as ‘Bolita’.

Then in the 20th Century it became associated with the big-city slums and would be playable for just pennies, and bookies even allowed credit.

This type of illegal gambling often led to very powerful criminal syndicates in a majority of large cities.

Later in 1917, reformers were led by the Christian movement to succeed in passing new state laws which closed pretty much every race track by this time.

In the 1920’s however, there was an anti-prohibition legislation, and much of the influence became discredited, and horse racing soon returned to America, and so did the betting that came with it.

The Great Depression also saw many forms of gambling such as bingo return, allowing charities to raise money.

The 30s then saw states open race tracks, and it was not long after this that it made a true comeback.