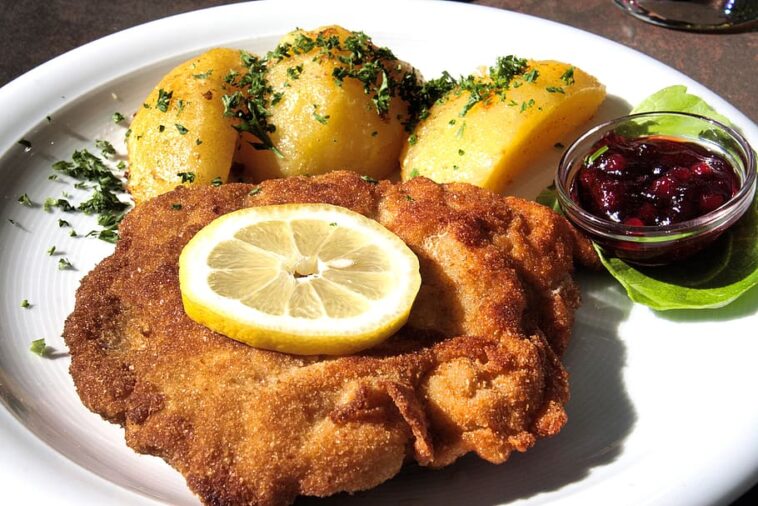 What to Try in the Capital of Austria?

Authentic dishes are one of the essential things to try when traveling abroad, especially before the upcoming New Year celebrations. If you have decided to visit Vienna, the capital of Austria, trying the local foods is simply a must on your to-do journey list: for starters, there are plenty of traditional Austrian dishes that are recognized as the symbols of Vienna, like Viennese schnitzel, tafelspitz, or strudel.

This article will guide you through authentic Austrian foods — nowhere else in the world, you will find these cooked with such care and mastery. If you’ve already planned your trip to Austria and booked an apartment, now it’s time to learn more about the diversity of Viennese cuisine!

One of the most traditional and representative Austrian foods is a schnitzel. When the dish was first introduced to the Wiennar court in the 19th century, the legends of meat covered in gold, favored by the aristocracy, spread through the city. When first mentioned in the German cookbook written by Katharina Prato, the schnitzel was referred to as “breaded veal cutlets”. Nowadays, Austrian fiercely protect their recipes and are strict about what’s considered a true schnitzel and what is not (e.g. any attempts to use any other meat than veal were frowned upon.)

Almost every Viennese restaurant thinks that the most delicious schnitzel in Vienna is cooked in their kitchen. Test it out in these three establishments:

It took time for the potato to gain popularity in Europe. When it was first introduced to Europeans in 1588 by the botanist Charles de l’Ecluse, people considered this vegetable noxious. However, its popularity increased because of the food shortages occurring during the Napolean wars — and now potato is an indispensable part of Austrian cuisine.

The Wiener Erdäpfelsalat — or potato salad — is a common side dish for a schnitzel. Conceived in southern Germany, it’s a dish with unpeeled potato in a special marinade with salt, vinegar, onions, and parsley. Erdäpfelsalat can and should be — if you’d wish so — a stand-alone dish — but with Wiener schnitzel, it is particularly good. Go to these places for especially delicious servings:

Viennese restaurants serve tafelspitz — a dish with boiled beef, broth, vegetables, fried potatoes, horseradish, and onion sauce — and right in a hot saucepan. The legend says the dish was invented by Anna Sacher, a famous Austrian entrepreneur. She saw that soldiers weren’t eating enough because it was customary for a court to finish their meal when the emperor did, and Franz Joseph ate little and very quickly. The solution was tafelspitz: a dish that can boil for hours and only become tastier — and soldiers could eat after the visit to a court.

Thus, eating a Wiener Tafelspitz after a long walk around the city is a great idea — so you won’t be hungry during city explorations. Try tafelspitz in the city’s Plachutta restaurants on these streets (but they could be found almost in any part of Vienna.)

Austrians sure love potatoes (well, who doesn’t?) and have a lot to offer for soup lovers. Erdäpfelsuppe — a potato soup — is cooked with lots of spices, potatoes (obviously), other vegetables like carrot, turnip, and onion, greenery, mushrooms, and ham or bacon.

There are many versions of this dish — Wiener Erdäpfelsuppe in one restaurant might be slightly different from the same kind of soup in another establishment. However, the best traditional potato soup you can ever try in Vienna, as well as some other national Viennese food await you in the restaurants:

The traditional recipe of strudel includes apples and raisins but now you can find the course variations with different fruits, berries, cottage cheese, and other ingredients. All kinds of strudel have some sort of mythos behind them: people have been known to become incredibly rich after inventing them.

The spiced apples, usually with cinnamon or vanilla, are rolled in puff pastry and baked at about 204ºC for 12 to 15 minutes, quick and simple. They say it is vital for the dough to be light and transparent so a chef could read books or magazines under it.

Austrians love to cook strudel for unexpected guests. It’s recommended to try strudel — and other famous Austrian desserts — at one of the oldest and most cozy cafes in Vienna — Café Mozart on Albertinaplatz, 2. It has worked since eighteen century. Try Viennese coffee with the desert — Einspänner works especially well with it, especially if you love sweet things: there’s quite a lot of whipped cream.

The word ‘waffle’ first appeared in 1725, and since then this dish from the dough and leavened batter started to gain popularity in Western Europe.  Belgium and France are not the only countries well-known for waffles! Wiener Waffeln is another Austrian national dessert — soft, airy, and porous, filled with berries, fruits, ice cream, or buttercream, — you can taste the most delicious waffles at:

Where to Stay in Gastronomic Vienna?

Depending on the purposes of your trip and the locations you would like to visit, there are tons of different options to choose from. Stay in Vienna’s Old Town to feel its heart and find out more about its history — or choose the suburbs, quiet and peaceful. Do not forget to visit Hofburg Palace, the Prater, St. Stephen’s Cathedral, and the Museum Quarter. For the New Year celebration, Vienna’s concert halls, operas, and theaters prepare lots of performances — don’t hesitate to attend them as well.

Thus, while choosing a place to stay in Vienna, consider the purpose of your trip and your budget. You can also choose several different locations for short-term rent in each of them — to better experience the diversity of this city.