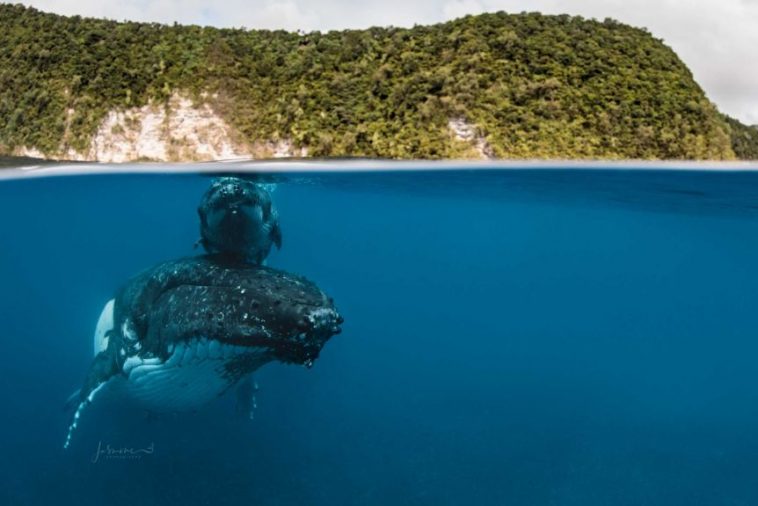 First of all, let me tell you one thing that yes, whales sleep for an appropriate time in the sea just like humans. Jasmine Carey, An award-winning photographer has helped explain a wonder of nature through its pictures. Jasmine took the photograph of a humpback whale and her baby sleeping in a vertical position in the water off the Kingdom of Tonga in the South Pacific in the month of July.

He has been awarded prestigious Hamdan bin Mohammed bin Rashid Al Maktoum International Photography Award (HIPA) this week with a prize money of $172,140 for his extremely beautiful and adorable photographs.

The one thing that the photograph was not showing that though the whale was sleeping it was also awake. The unique fact behind this is that in whales only one side of the brain sleeps at a time. One of the researchers named Wally Franklin, of Southern Cross University, has been studying humpback whale behaviour with the Oceania Project at Hervey Bay for 30 years.

According to the study, whales literally able to close one side of the brain while the other side stands awake and watch.

“Whales are air breathers like us and if they lose consciousness, they will drown,” Dr Franklin said. “So they have to remain conscious at all times and their brains have evolved to allow them to do that.

Dr Franklin said whales were able to hold their breath for as long as 35 minutes before needing to surface to breathe and they could also dive down to 600 metres.

Jasmine Carey said that the whale was observed to be sleeping position for about 17 minutes and later they went to the ocean surface for breathing. The calf was approximately 2 weeks old.

As per Ms Carey, There are whales who sleeps with one eye open, howvever, maximum sleep with both eyes closed. Whales were also able to sleep while singing and travelling the long route from their Antarctic feeding grounds to the Great Barrier Reef. The migration period of whales has been started with the whales moving north towards the reef.

“There are heaps of whales now travelling up the Sunshine Coast with the peak of the northern migration in June,” Dr Franklin said. “From mid-July, they travel south and come into Hervey Bay.”