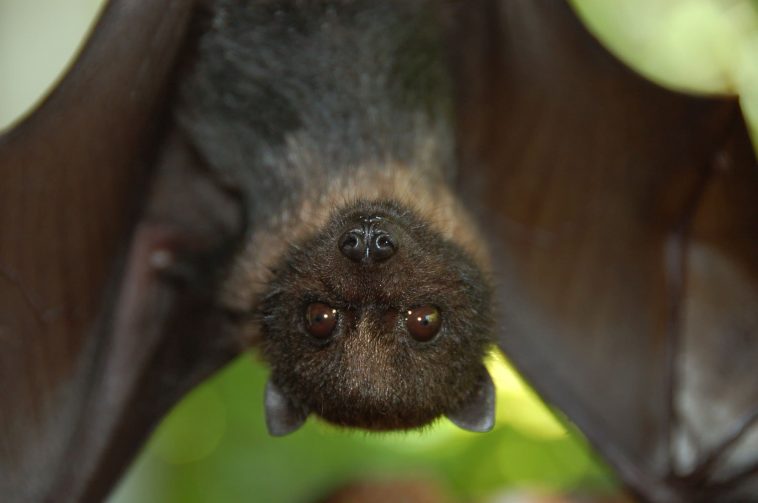 Bats are diverse species of flying mammals and seen in all continents except Antarctica. Currently, 1100 species of bats which makes the quarter of all mammals on planet Earth, However, 50% of them are endangered because of killing, deforestation and pollution. Here is the list of largest bats species in the world,

Largest Bats in the World

Livingstone’s fruit bat also known as the Comoro flying fox is endemic to Anjouan and Mohéli islands in the Union of Comoros located in the western Indian Ocean. Among Comorian species, this is the largest species of bats and prefer habitat is montane forest, however, the species is endangered and only 1,200 individuals left in the wild. Apart from humans, storms, hunting, and their struggles to readapt to new habitats are also one of the causes of the declining population.

Sulawesi flying fox also known as Sulawesi fruit bat is a bat species seen in Indonesia. As per the figures from IUCN, the species is listed as “Vulnerable”. It is mostly seen in the Sulawesi, Buton and some other smaller islands of Indonesia as well. This is also frugivore who loves to eat coconuts and breadfruits. It prefers to roosts in trees majorly mangrove forests and also very sensitive to human disturbance. It refers to keep itself in colonies and by spreading seeds the are a very important part of their local ecosystems.

One of the largest bats in the world, Insular flying fox also is known as a Pacific flying fox that belongs to the family Pteropodidae. The bat species is mostly seen in the Cook Islands, Solomon Islands, Fiji, Tonga, and Vanuatu. By this, it is one of the most widespread bat species in the Pacific. It only ventures in the Pacific islands and prefers lowland forests, however, they are frequently seen steep mountains and cliffs. Like other species of bats, Insular flying fox is nocturnal and seen in colonies.

Mariana fruit bat also known as the Mariana flying fox mostly seen in the Mariana Islands and Ulithi. The species is endangered and listed as threatened by the US Fish and Wildlife Service. It can weight upto 0.6 to 1.1 lb with a forearm length of 5.3 to 6.1 in. Males species are larger than females. Talking about the appearance, The abdomen of the species is black to brown in colour with grey hairs. The neck is brighter brown to golden brown colour, however, it varies from brown to black.

The straw-coloured fruit bat is one of the bats that is widely distributed towards the southwestern Arabian Peninsula and several zones of sub-Saharan Africa. The bat species is seen in large colonies of 100,000 bats and eve million sometimes. This also one of the migratory bats which in the month of October to end of December every year with a population of 10 million and the migration was discovered in 1980. Talking bout the appearance, the species yellowish or straw colour of its exterior and the wings are black with back hair is pale and tawny.

Lyle’s flying fox is a flying bat species that belongs to the family Pteropodidae. It is seen in the regions of Cambodia, Thailand and Vietnam with a little population in Yunnan, China as well. The species is vulnerable” and known for its large eyes and pointed ears. It likes to live in colonies and often seen roosting together during the daytime. Talking about the appearance, the upper part of the body is blackish and the lower one is dark brown or yellowish-brown. It is sometimes killed for meat by the farmers in the regions of China.

Fijian monkey-faced bat also known as Fijian flying fox is native to Fiji. The species was discovered on the mountains of the island of Taveuni by William and Ruth Beckon in 1976. This is the only mammal endemic to Fiji and weight approximately 222–362 grams. Talking about the appearance, the bat species has orange eyes and can easily differentiate from other Fijian megabats.

Wahlberg’s epauletted fruit bat is a specie that belongs to family Pteropodidae. It is mostly seen across southern Africa. The species is also known for its large eyes and a fox-like face which is quite similar to the megabats. Male species of Wahlberg’s epauletted fruit bat is darker in colouration than females. Apart from African forests, the population is also seen in the wooded urban areas of man-made structures. Like other bat species, it is also frugivorous and loves to eat figs, guava, and various fruits of Diospyros species.

Long-tongued fruit bat mainly feeds on the banana flowers and hence it is mostly seen in the South and Southeast Asian countries. The species was discovered by Danish mammalogist Knud Andersen in 1911 and described it as a subspecies of the long-tongued nectar bat. Till 1983, it was considered as full species rather than a subspecies. It can grow upto 42–48.5 mm and weighs approximately 18–26 g. The bat species is nectarivorous that loves to feed on the nectar of flowers and that too exclusively from banana flowers.

Largest Bats in the World