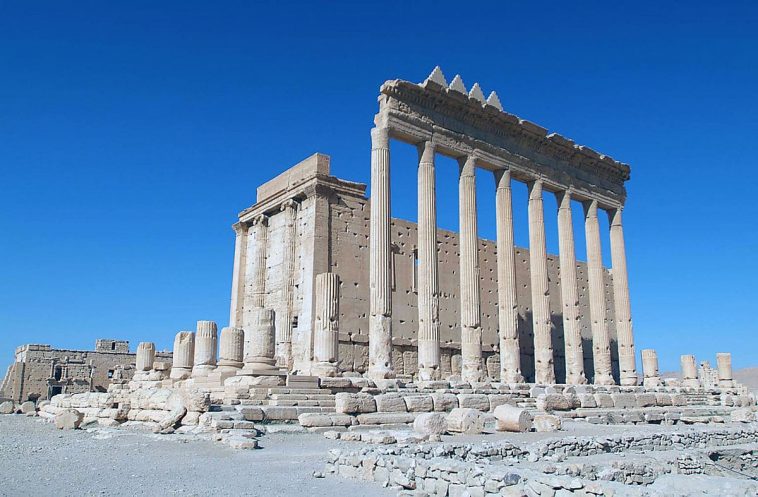 Wars have never been easy in history and have been the cause of massive destruction of people, buildings, cities and tribes. It takes years to build a precious monument but war can raze it to the ground in seconds. Over the decades, wars and violence in Eastern Europe, the Middle East and West Africa have taken a toll on historic buildings and monuments. This has led to massive destruction of memorable monuments and buildings that got devastated by wars. Below is a list of historical and precious monuments destroyed by war that fell prey to the demolitions caused by wars.

1. The Ancient City of Bosra, Syria

The City of Bosra in Syria was once the ancient capital of the Romans in Arabia. It was famous for a magnificent 2nd-century Roman theatre, early Christian ruins and several ancient mosques. The site has suffered from vandalism and neglect since the Syrian war began in March 2011. When Bosra was attacked in December 2015, during combat between pro-government forces and rebel fighters. During the conflict, the country’s heritage sites faced many risks, and Roman theatre courtyard and parts of the Ayyubid Citadel got damaged.

This temple was an ancient, 1-2nd century monument located in Palmyra, Syria. The temple was dedicated to the Mesopotamian god Bel along with the lunar god Aglibol and the sun god Yarhibol It was a remarkable example of Greco-Roman architecture with 1000 columns. The Temple of Bel was converted into a Christian church during the Byzantine Era, and later in 1132, was converted to a mosque by the Arabs. In August 2015, the temple ruins were further destroyed by ISIS on grounds of idolatry. More than 150,000 tourists visited Palmyra every year before the Syrian conflict.

These were two massive statues of Gautam Buddha that were carved in red sandstone on the side of a tall cliff in the Bamiyan province of Afghanistan. These statues, each of Vairocana and Sakyamuni, in different mudras, were the classic example of Gandhar art. The Bamiyan region had earlier been a Buddhist site before the Islamic invasion in the 7th century. The statues were exploded and destroyed in March 2001 by the Taliban on grounds of them being idols.

4. The Great Mosque of Aleppo, Syria

This massive mosque was one of the oldest mosques in Aleppo, Syria.  It was built in the beginning of the 8th century and was a traditional architectural sample of the Zangid dynasty. The mosque’s minaret was destroyed during heavy fighting in the Syrian civil war in April 2013 between the Government and the rebel Al-Qaeda group.

The Royal Opera House was an opera house and a centre for performing arts in Valletta, Malta. It was designed by the English architect Edward Middleton Barry in 1866. It was one of the most beautiful and iconic buildings in Valletta. The hall was extensively damaged by fire in 1873 but was rebuilt in 1877. However, the theatre was brutally destroyed by aerial bombing in 1942 during World War II.  Later on, after several attempts at rebuilding it, the ruined hall was redesigned and it once again opened to the public in 2013.

Vijećnica or the Sarajevo City Hall was designed in 1891 by the Czech architect Karel Pařík. The building has been used for various municipal purposes like as a city court and parliament house. In 1948, it became the National and University Library of Bosnia and Herzegovina. In August 1992, the City Hall was hit by bombs and heavy artillery. The hall was set ablaze and caused severe damage to the library. The hall was restructured on an ad-hoc basis in 1999 and reopened to the public in 2014 after funding by several European nations.

The Old Summer Palace, known in Chinese as ‘Yuanming Yuan’ or the Imperial Gardens, was the chief royal residence of Emperor Qianlong of the Qing dynasty and his successors, in current-day Beijing in China. It was reputed for its beautiful gardens, architecture and numerous art and historical treasures. During the Second Opium War in 1860, the British troops carried out complete destruction of the palace, under the Anglo-French forces.

One of the heritage monuments destroyed by war, The Hiroshima Prefectural Industrial Promotion Hall or the Product Exhibition Hall building was originally designed by the Czech architect Jan Letze in 1915. During the atomic bombing of Hiroshima on 6 August 1945, large parts of the building were destroyed. This monument is now part of Hiroshima Peace Memorial Park and is known as the Atomic Bomb Dome( Genbaku Dome). Since 1966, it is named as a World Heritage Site by UNESCO. These ruins now serve as a memorial to the millions of people who lost their lives in the atomic bombing of Hiroshima.

This is a Crusader castle in Syria which means “Castle of the Knights” built by the European Crusaders in Syria and Palestine. This 900 years old castle has withstood centuries of religious conflict and division. It was taken by opposition forces in 2012 and was used as a rebel command and control centre, to store weapons and as a transit base for foreign fighters. The rebels looted, destroyed, and set fire to the building. The building is now scarred by bullet holes by rebel fighters, and parts of it have been destroyed in explosions.

This tomb in Mosul, Iraq was an 8th -century, ancient mosque of the Prophet Younis. It was the final resting place of the biblical prophet and a religious site for the Christian, Jews and Muslim faiths. The tomb was set on a high mound, along with an ancient Assyrian palace and temple, and a Jews religious site, a Christian church, and a 12th-century mosque. However, in July 2014, the revered religious site was blown up by ISIS militants who considered it a malicious place. Not only the mosque, but several nearby buildings and houses were also destructed in the process. It is one of the most beautiful monuments destroyed by war.

These are some of the prominent historical monuments destroyed by the that have been razed by war or warlike activities and terrorism. Cultural destruction has been long condemned by all nations globally and continues to be a source of concern in some nations. These destructions have not only destroyed buildings but have also destroyed human life and dignity.