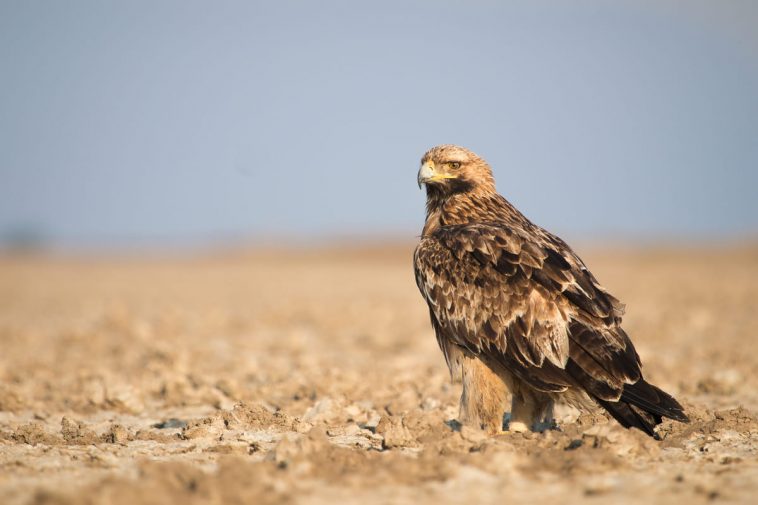 Eagles are recognized as regal birds and a symbol of pride, strength, and power. They have inspired us for centuries with their power, brilliant hunting skills, and oversized wings. They are large birds of prey, who will never surrender to the size or strength of its prey. Eagles will always fight to win their prey or regain their territory. They have always been associated with beauty, bravery, courage, and honor. Eagles have a strong vision and can see their enemy from afar. They can fly up to an altitude of 10,000 feet, where you will never find another bird. At the same time, they can swiftly land on the ground as well. Eagles are the only birds that stay brave in the storm. When all other birds try to flee and hide from the storm, eagles use the pressure of the storm to glide higher without having to use their energy. With such amazing characteristics, eagles are an intriguing bird species. Let us check out the topmost beautiful eagle species that will leave you awe spired.

The Golden Eagle is native to North America and is their largest bird of prey. It can grow to a length of 3 feet, with an amazing wingspan of 6 to 7 feet. It has a dark brown plumage with spots of gold colour on its nape. The golden eagle has brown eyes, a yellow beak, and 3-inch long talons. Golden Eagles inhabit the open country and dwell around mountains, hills, and cliffs. They are known to kill mammals bigger and heavier than wolves by a powerful strike directed at the back of the skull. It is also listed as one of the apex predators in the world.

The Martial Eagle is a large eagle native to the Saharan Africa. it has feathers over its tarsus. It is the largest eagle in Africa and has a wingspan of about 6 feet. It has a 32 inches long body that can weigh up to 6 kg. The upper body of these eagles is dark brown, while their belly is a beautiful white with black streaks. They have white legs and very large talons. The IUCN has currently classified the Martial Eagle as “Vulnerable to extinction”.

The Eastern Imperial Eagle is a large bird of prey native to southeastern Europe and Asia. Most of these eagle populations are migratory. Its body size varies between 72 and 84 cm, and its wingspan is about 1.8 -2 m. Also known as the King Eagle, these birds are dark brown with white shoulder patches. They have a dark grey coloured tail, which is covered with white stripes. It has bright yellow eyes with a grey beak. These eagles build large nests that can have a span of about 2.4 m. Today, it is a vulnerable species of the eagle with its population decreasing in numbers rapidly.

The Bateleur is a medium-sized eagle and is the national emblem of Zimbabwe. It is native to Africa and Arabia. They have a wingspan of about 5 – 6 feet. They have black plumage, the mantle and grey tail feathers, and a contrasting red facial skin, beak and legs which make it striking in appearance. These eagles pair for life and can live up to 25 years in the wild.

The Booted eagles are medium-sized, migratory bird of prey with a wide distribution in the Arctic regions and southern Asia. They can be up to 18 inches in size and have long tails, a slender build and white patches at the base of wings. They occur in both pale and dark morphs. The dark morph is less common. They have a head and neck which are pale brown or a streaked darker brown, with white foreheads. They have pale upper tail feathers. The northern populations are migratory, while the small southern African populations are sedentary.

This bird is found throughout Central America, especially in Brazil.  It is a powerful bird of prey and one of the largest in the world. It has huge, strong talons as big as a bear’s claws. With a wingspan of up to 2 meters, it’s a good navigator and has thick legs. The bird can lift its weight and is known to prey on small mammals, birds, and reptiles. Deforestation of the Amazon basin has pushed them into the “near threatened” range.

The Rufous-bellied Hawk-eagle is a bird of prey found in the forested regions of tropical South-East Asia. They are relatively small for eagles and resemble a falcon. They have a black hood with a short crest with feathered legs. Their underbodies are chestnut brown while they have white on the throat and breast. They perch in a very upright stance so that the wingtip almost reaches the tail.

The largest eagle in the world is the Steller’s Sea Eagle. They inhabit the coastal areas of Russia (Sea of Okhotsk) and Japan where it is found in the greatest numbers. This is a sturdy eagle, with dark brown plumage and graceful white wings and tail, and a yellow beak and talons Some species have longer wingspans of up to 8 feet and survives on fish.  Pollution and overfishing have threatened its existence, and now this bird is listed as “vulnerable” on the extinction scale. Japan has classified this bird as a National Treasure, giving it a legally protected status.

Bald eagles are found throughout most of North America, from Alaska and Canada to northern Mexico, and are the awe-inspiring national emblem of the USA since 1782. The Bald Eagles are majestic birds with a blackish-brown body and a white head and tail. They may have fully dark brown plumages, while some can have spotted plumes with large white patches. They have yellow eyes and bright yellow feet. Bald eagle nests are enormous, about 5 to 6 feet in diameter. These birds can soar high with wings flat, like a large, dark plank in the sky.

The Philippine Eagle is also known as the Monkey-eating eagle. It is native to forests in the Philippines. It has been declared Philippines ‘ national bird and is among the rarest and most powerful birds in the world. It has distinct features like long crown feathers, a large arched beak, and two sharp bluish eyes. Unfortunately, the Philippine Eagle is critically endangered due to poaching and deforestation.

These are the 10 most beautiful eagle species in the world. Kindly share and do post your comments.