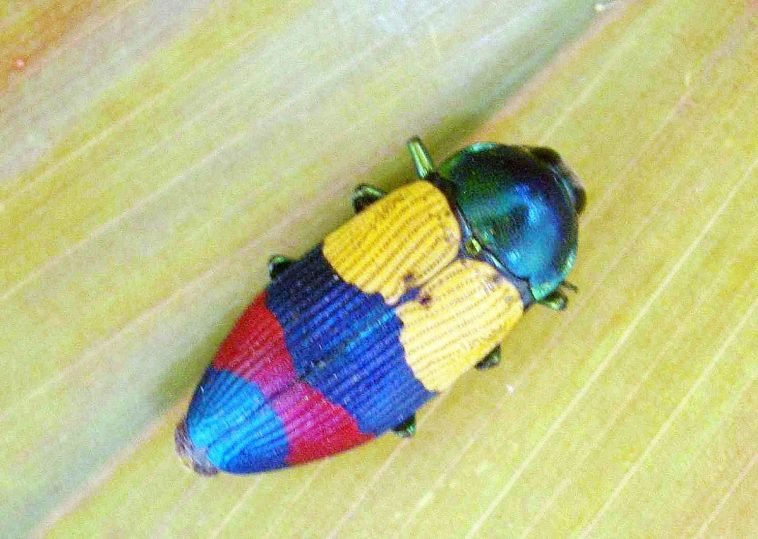 Jewel beetles are among the most beautiful and commonly known variety of beetles. They belong to the family Buprestidae of beetles and are known so because of their glossy iridescent colors. The family has more than 15,500 species known in 775 genera. Jewel beetles are often brightly coloured, with a metallic sheen that makes them popular with collectors. They measure less than 2 cm in length, but some can be quite large, reaching up to 10 cm. They vary in colour from dull black and brown to bright purples and greens and can have beautiful markings. These are active on sunny days and can be found all over the world, with over 750 varieties in America and more than 15000 species in Australia alone. Below we discuss some of the most beautiful Jewel Beetle varieties that will leave you awe-struck at the marvels of nature.

They come in 2 species- Chrysochroa Oceletta fulgens, which is native to Thailand, and Chrysochroa Oceletta Oceletta, that are found in the Andaman Islands, India. They are gloriously coloured and shiny beetles. They sport a stunning technicolour coat with a golden yellow waistband. They grow to a maximum length of 40mm. Chrysochroa ocellata can reach a length of about 20 mm(0.79 in). They come in beautiful metallic green colors with a bright reddish band and a broad rounded yellow-orange spot in the middle. The legs are bright green.

This is another species of jewel beetle of the family Buprestidae. They can reach a length of about 30–40 mm (1.2–1.6 in). These beetles have a glossy body surface with iridescent colors. Their beautiful colors vary from green to reddish or violet. These beetles are found from Malaysia, Indonesia, the Philippines, to Papua New Guinea. They have several subspecies scattered all around the world.

This species of beetles They are found in the tropical regions of Africa, which includes the Democratic Republic of Congo, Uganda, Tanzania, Ivory Coast, Ghana, and Togo. They are so beautiful that they look like they’ve been crafted out of stardust. They have breathtaking iridescent green, red or purple colors, depending on subspecies. They are popular as “pet insects” They are also easy to breed, and highly fertile.

This beetle is native to Queensland, Australia.  It grows to 26 mm. It is easily recognizable with its bright yellow and red bands on greenish-blue elytra. The head and thorax are dark blue-green. The elytra or the wing box are lined with rows of fine pits that give them a furrowed appearance. They feed on the flowers of Eucalyptus gummifera trees.

Another beetle variety, the common name comes from the male’s characteristic strong hind legs that are almost frog-like in appearance. The female beetles are smaller and have comparatively much smaller legs.  This is a species of iridescent, colourful jungle beetles known either as frog-legged beetles or kangaroo beetles. They can reach a length of 25–50 mm (0.98–1.97 in).

This is another popular species of Jewel Beetles that are native to Italy. They are about 15-20 mm in length and found in beautiful colors like shades of green, violet and deep purple. This beetle has a magnificent metallic sheen with a stripy glistening body. It has a shiny green or golden green, with bluish reflections, with a reddish elytral border. They occur in beautiful colors and the underside of the body and green legs with copper or purplish reflections. Eurythyrea austriaca is widely distributed in central and southern Europe as far as North Africa. It is a rare species now.

Chrysochroa fulgidissima or Yamato tamamushi in Japanese is a metallic woodboring beetle of the family Buprestidae. This beetle is native to Japan and Korea. It is typically found in woods or forests during summer and can grow between 30–41 mm (1.2–1.6 in) in length. This insect has iridescent wings that glow with different colors. Each angle of sight displays a different colour. So one cannot be sure exactly which colour it is, and it reflects several different colors.

This species is found only in Australia and New Guinea; usually in rain forests; The Castiarina category has about 500 species, found only in Australia. They are big, beautiful beetles with the iridescence of green, red, yellow and blue.  They are the finest examples of living jewels in nature. Calodema and Metaxymorpha species are native to New Guinea and the northern and northeastern coastal areas of Australia.

This Giant Metallic Ceiba Borer is a species of beetle in the family Buprestidae. This is one of the largest of the buprestid beetles, reaching a length of about 50–80 millimetres (2.0–3.1 in). Hence the Latin name “gigantea” is given to the species. The body of this beetle is robust and elongated. The elytra or the wing box has a wrinkled surface and a metallic green colour with reddish or purplish tinges. The wings of the newly emerged adults have a coating of a yellowish powder. As the beetle ages, this powder wears off. This species is found chiefly in Central and South America.

This is another beautiful species of beetle in the Buprestidae family, which is native to Australia. They are found between Melbourne and Brisbane. They grow up to 20mm long and feed on Leptospermum scoparium flowers. The body has shiny red and yellow bands among black bands that give it a unique appearance.

These are the top 10 species of the Jewel Beetles found all across the globe. They are among the most beautiful insects that nature has crafted out of sheer magnificence and beauty.