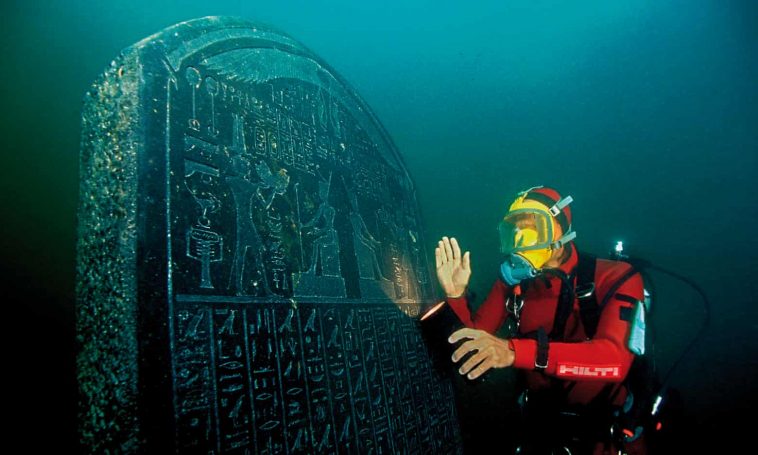 Mysteries do not engulf the space alone. The dark depths of the mighty oceans also hide the ruins of lost cities that sunk over the course of time, only to become specks in the history of human civilization. Several tales and myths surround the existence of such cities that glorified time but lost their lustre and disappeared in history. The Lost City of Atlantis, a semi-mythical city, still fills us with awe and intrigue. Below we explore ten such mysterious underwater cities of the ancient world which continue to spark our imagination till today.

Greece is the first name that comes into mind when we talk about the ancient and mythological world. The ancient city of Pavlopetri is located in the south of modern-day Grace and is supposed to have sunken underwater around 1000BC due to a massive earthquake. Historians claim the city to be about 5000 years old, and it is a beautiful city layout that was well ahead of time. Archaeologists have discovered an 80,000 sq m city with well-designed roads, houses, gardens, temples, complex water management systems, and monumental buildings. A vast open plaza has also been unearthed in the center of these sunken ruins.

Olous is the lost city of the Minoan civilization that bordered Crete’s island in Greece. This harbour city was once home to over 40,000 people between the 5th and 2nd century BC.  Archaeologists have discovered ancient texts within the ruins that link the town with the ancient cities of Knossos and Rhodes. The people of Olaus worshipped the famous Greek Gods Zeus, Artemis, and Appollo as discovered from the coins excavated from the site. The city had a famous Apollo sanctuary with the bronze statues of Greek gods, which are exhibited today in Heraklion’s archaeological museum. Tourists can visit the remains of the city in Elounda Bay, which lie scattered as wall bases.

Heracleion was built during the 8th century BCE on the Nile River banks. It was named after the hero Hercules himself once visited it as per legends and ancient texts. This city of Thonis-Heracleion was submerged deep under the sea, lying unknown for thousands of years. It’s now known as Egypt’s Atlantis after French archaeologist Franck Goddio and his team discovered the completely submerged city, 6.5 kilometres off Alexandria’s coast. The excavations brought to light the underwater granite ruins which belonged to the lost city of Cleopatra, who was the last pharaoh of Egypt. Many articles were recovered from the site, along with 64 ships, 700 anchors, tall statues of Isis, and the remains of a massive temple to the god Amun-Gereb.

The ancient city of Shi Cheng or the Lion City was, established about 1300 years ago at the foot of the Wu Shi Mountain or the Five Lion Mountain. It was built during the rule of the Eastern Han Dynasty, but was flooded and now lies 40m underwater. The city and the valley were flooded in 1959 as part of the Xin’an River Dam project to create an artificial lake. It was rediscovered in 2001. Several expeditions and underwater photographs have revealed that the city had five entrance gates and wide streets with intricate stonework. The town is still well-preserved.

One of the Mysterious Underwater Cities, Port Royal was a village located at the end of the Palisadoes in Kingston Harbour, Jamaica. It was founded in 1494 by the Spanish and was a shipping and commerce hub in the Caribbean Sea. The port town became a hotbed for piracy around the 16th and 17th centuries. It was known as the most sinful and wicked cities in the world” due to its toxic booze, pirates and slave trade. In 1692, the port was hit by a massive earthquake and tsunami that sank much of the city into the sea.

Yonaguni, is the westernmost inhabited island of Japan, lying between the East China Sea and the Pacific Ocean.  Yonaguni Jima is the ruins of a Japanese Atlantis, submerged stone structures lying just below the waters. The lost ancient city is supposed to be sunk by an earthquake about 2,000 years ago and was discovered in 1985. The most massive structure unearthed is an 82-ft, monolithic, stepped pyramid.

This legendary metropolis was supposed to be built by none other than Lord Krishna 5000 years ago. It is an important landmark in the historical relevance of Mahabharata. Its ruins were more recently discovered in the Gulf of Khambhat. The researchers have used carbon-dating methods to determine that this ancient city is more than 9,000 years old, much older than Harappan and Mohenjodaro civilizations. Marine archaeological explorations off Dwarka have brought to light a large number of stone structures and palaces.

Marine scientists have discovered the ruins of an ancient city off India’s coast in the Gulf of Cambay in 2002. This ancient city is located nearly 4m under the sea. A team of divers discovered stone tools, beads, sculptures, and pieces of pottery there. The gulf waters also revealed sandstone walls, a grid of streets, and evidence of a seaport 70ft underwater. Artefacts from the city have been carbon-dated to about 9,500 years ago. They are kept preserved in the National Geophysical Research Institute (NGRI), Hyderabad, India.

Lake Titicaca, located in the Andes close to Peru, is the largest freshwater lake in South America. It is known as the cradle of Peru’s ancient civilizations. The famous Purakas and the Incas had their origins in settlements around this lake. These civilizations have left behind ruins including, a mysterious underwater temple. According to reports, researchers have discovered 1000 – 1500 years old ruins. Long roads, a terrace for crops, and an 800-meter long wall under the Lake have also been revealed and photographed.

The Kiladha Bay area on the Peloponnese Peninsula, Athens, has been the home to many ancient Greek settlements. A massive settlement that got submerged beneath the Aegean Sea was discovered in 2014. Several circular and oval buildings can be seen in the ruins, which stretch over some 12 acres. The construction reflects the same style as those found in other Bronze Age Greek civilizations. Researchers date these underwater ruins to around the same time as the early Minoan settlements on Crete and the Giza pyramids.

These are some of the mysterious underwater cities of the ancient world that got submerged and became memories in histories. Many more ancient cities are still waiting to be uncovered who have their memoirs to tell in the story of human existence.