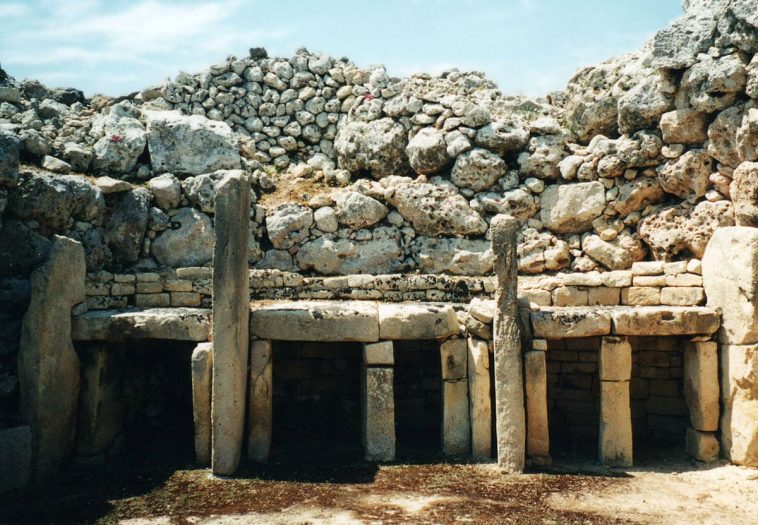 Building in layman’s terms can be defined as a free-standing structure constructed across the world that was in a use or has a continuous occupancy. We will list out 10 oldest buildings in the world which will include each of the continents and within each country.

Oldest Buildings In The World

Barnenez also is known as the Cairn of Barnenez is the oldest building in the world situated in the near Plouezoc’h, on the Kernelehen peninsula in northern Finistere, Brittany (France). The Neolithic monument dated back to 4800 BC and listed as the earliest megalithic monuments in Europe and one of the oldest man-made structures across the world. One of the finest examples of megalithic art believed to be erected between 4850 and 4250 BC (first phase) and 4450 and 4000 BC (Second Phase).

Tumulus of Bougon also known as Necropolis of Bougon situated near La-Mothe-Saint-Héray, between Exoudon and Pamproux in Nouvelle-Aquitaine, France. The site was discovered back in 1840 and later taken over by the department of Deux-Sèvres in 1873 to protect it for scientific research, however,m excavations resumed in the late 1960s. The site was located in the limestone plateau in the loop of the river Bougon and the whole area was known to be “Les Chirons”.

Saint-Michel tumulus is a megalithic grave mound situated near east of Carnac in Brittany, France. This is the largest grave mound in continental Europe and one of the oldest buildings in the world. It consists of a mound of earth and stones which is 125 metres (410 ft) long, 0 metres (160 ft) wide and 10 metres (33 ft) high. The site was explored in 1862 and according to the researchers, there is a central vault containing a fairly prestigious funerary furniture that includes axes, pearls, flint tools and sillimanite. The second dolmen and fifteen small stone ches were discovered around 1900 by the archaeologist Zacharie Le Rouzic.

Uruk site belongs to the Uruk period and played a very important role in the urbanization of Sumer in the mid-4th millennium BC. The final phase of one of the oldest buildings has been completed in 3100 BCE with residents of about 40,000 residents. Anu ziggurat of Uruk is the oldest massive White Temple was built atop of the ziggurat. Later, under the northwest edge of the ziggurat a Stone Temple has been discovered which is listed as one of the oldest buildings in the world.

Monte d’Accoddi is also one of the Neolithic archaeological site situated in the territory of Sassari. It has one of the oldest stone platforms constructed by the Ozieri culture and even other rulers, however, the oldest part has been dated back to around 4,000–3,650 BC. The surroundings of the structure has been excavated in the 1960s. The site has been open to the public and there were minor reconstructed during in the 1980s.

Knap of Howar is one of the oldest preserved stone houses in northern Europe. According to the Radiocarbon dating, the stone house was occupied from 3700 BC to 2800 BC and follow the similar trend of the settlement of Skara Brae on the Orkney Mainland. The walls of the buildings and at 1.6 metres and the stone furniture was intact giving it a beautiful look of the house. There is evidence that residents are keeping cattle, sheep and pigs, cultivating barley and wheat.

Ggantija is a megalithic temple complex which is considered to be older than pyramids of Egypt. Two temples has been built between 3600–2500 BC which makes them one of the oldest buildings in the world. This is also teh second oldest existing manmade religious structures after Göbekli Tepe, which is located in Turkey. According to the researchers, there are multiple figurines and statues on the site.

Dolmen of Menga is a megalithic burial mound also known as a tumulus which is a bigger form of dolmen dates back to the 3750-3650 BCE approx. The burial mound is located near Antequera, Málaga, Spain. One of the largest known ancient megalithic structures in Europe was built with a total of thirty-two megaliths and the largest one weight around 180 tonnes. These megalithic buildings are in the form of deep and narrow well in the bottom of the chamber.

West Kennet Long Barrow is also is known as South Long Barrow located near the village of Avebury in the south-western English county of Wiltshire, United Kingdom. The building was constructed in the thirty-seventh century BCE (Early Neolithic period) and it is surviving today also, howvever, little reconstruction has been made in the building.

Listoghil is popular as the large central monument located in the Carrowmore group. It was named as Carrowmore 51 by George Petrie in 1837, and this designation is still in use. According to Charles Elcock (1880s) during the removal of stones for ‘road metal, the central chamber has been uncovered in the middle of the mound did its destruction end. Later, the site has been investigated by antiquarians and findings will be ‘bones of horses’, charred wood and a worked flint javelin head. There are some collection has been situated in the Alnwick Castle collection.