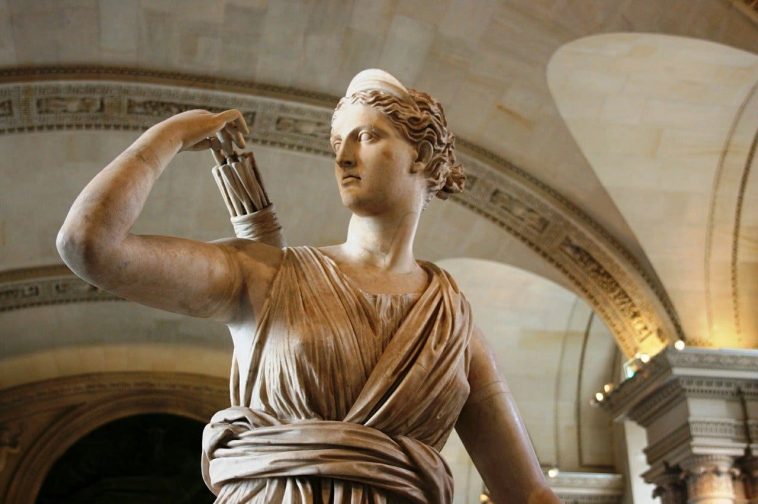 The Roman Gods and Goddesses are considered to be one of the greatest among all. Romans are known to have a mythological background and them ave different Gods such as Mars, the god of war, Neptune, the god of the sea, Bacchus, the god of wine, and the list goes on. During the 12 centuries of Ancient Roman civilisation, teh religion was at its peak and it moved on the path of Greek pantheon with some foreign cults and adopted the practice of Emperor worship and later it has tilted towards Christianity in the final stages of Roman Empire. Let me list down some of the greatest Roman Gods and Goddesses on planet Earth,

Neptune is the best and the greatest god of all time, He is the Roman god of water and sea and they are very similar to the Greek God Poseidon. The greatest ROman God has two brothers, One is Jupiter who is teh God of Sky and also chief of Roman Gods. The other one is Pluto, who is the Roman God of Dead. Talking about the appearance, Neptune is often seen carrying a trident along with three-pronged spear that is mostly used for catching fish. He rode on the chariot pulled by a sea creates or horses. It is also believed that sea creatures and horses are Neptune favourite animals. The temperament of Neptune is considered to be violent nature and temperament. There are various stories that suggest that vindictive nature and his behaviour is said to reflect the unpredictable nature of the sea. Also, there are facts that because of Neptune’s violent temper, Earthquakes are also associated with it.

2. Jupiter – God of Thunder and the King of Gods

According to Roman mythology, Jupiter considered as the God of Thunder and the King of Gods. He is not only the chief of Gods but even has the power to punish and or ban any god that has or has not doe anything that had crossed the rules in which he should be stated number one. JUpirot has two brothers namely, Neptune and Pluto. Both of the gods controlled the realm of existence, Neptune being the God of the sky and Pluto being the God of the underworld. It is believed that Jupiter was born from Saturn and was the supreme god. Also known as Jupiter Optimus Maximus and considered as the gods of Roman mythology. There were multiple jobs assigned to him right from bringing light and controlling the weather. Jupiter presence was required during the war because he supplies protection during the battle and gave victory to the winners.

One of the most important Roman Gods and Goddesses is Apolo who is the God of many things including music, poetry, art, oracles, archery, plague, medicine, sun, light and knowledge. Born on the island of Delo, Apollo father was  ZEUS and the Titan Leto. Apolo twin sister Artemis, who is also an Olympian shared an aptitude for archery with Apollo. His forename was Phoebus which means “bright” or “pure”  and directly attached to his grandmother, the Titan Phoebe. God taught everyone about the art of medicine and hence known as the “The Healer”. Apollo was also considered as the  God of Light and the God of Truth and served as an intermediary between the gods and men. Animals sacred to him are dolphin and swan.

4. Diana – Goddess of the Hunt and Moon

Diana was the daughter of the Roman god JUPITER and his mistress, Latona. Just like Jupiter, Diana was born on the island of Delos, however, She is primarily associated with hunting. There were other responsibilities of Diana that includes Roman Gods and Goddesses of woods, children and childbirth, fertility, chastity, the moon, and wild animals. Talking about the appearance, Diana was tall and beautiful and often resent herself as a young woman between the age of 12 and 19. During the artwork, She was presented as wearing a quiver of arrows on her shoulder and holding a bow. Also, Diana was a symbol of purity and she was also prayed by women.

5. Pluto – God of Death and the Underworld

Pluto was one of the three brothers born to the Roman Gods and Goddess, Saturn and his wife Ops. The chief duty of Pluto was the  God of the Underworld and after the death of his father, Saturn, all three brothers divided the department among themselves where, Jupiter has taken command of the sky,  NEPTUNE, the sea, and Pluto, the underworld. It is believed that the Pluto lived in a magnificent palace which was there at the entrance of Elysian Fields, howvever, it was a dark place, since it is underground. Apart from the underworld, Pluto was depicted driving an ebony chariot drawn by 4 black horses. Pluto has the keys of the large gates that locked the dead souls permanently within his kingdom.

According to Roman Mythology, Mars was one of the most important Roman Gods and Goddesses. The role of Mars was very important and considered second only to Jupiter who was the leader of the pantheon. The God of War, Mars was the son of God Jupiter and the Goddess Juno. The father and mother of Mars were known for their strength and protection. Mars was the protector of the Roman Army but at times he is argumentative and even unprotective among all Roman Gods and Goddesses. It is also believed that Mars was the father of Romulus and Remus, both of them are twin brothers who were considered as the founders of Rome.

7. Minerva – Goddess of Wisdom and War

The Roman God of Wisdom, Minerva, who was also the Roman goddess of trade, the arts, and strategy in war. There are multiple domains attached to Minerva, that includes,  medicine, poetry, and handicrafts. Minerva was responsible for so many things that sometimes Ovid called her the “goddess of a thousand works” and She was highly influenced by the Greek goddess ATHENA. Talking about the appearance, Minerva was always portrayed as wearing a chiton which is a Greek garment and a helmet. After Minerva was influenced by Athena, her symbol becomes the owl, even today, it depicts wisdom. The reason Minerva was important to the ROoman mythology that she is a part of “Capitoline Trio” which is a combination of three Gods that considered as the patrons of their city.

Venus is the Roman God of Love, Beauty and Lust. Romans considered Venus as their ancestress and as per the mythology, Venus son Aeneas fled from Troy to Italy and later become the ancestor of Remus and Romulus, both of them founded the Rome. To conclude, we can say that Venus was the mother of Rome and even venus have strong ties with Greek Mythology. The Venus of the festival was celebrated every year on April 1 and known as Veneralia. There were other symbols of Venus such as scallop shell, doves, dolphins, pomegranates, pearls, mirrors, and girdles.

9. Ceres – Goddess of the Earth

Ceres is considered as teh Roman Gods of agriculture and the love a mother bears for her child. This constitutes the whole Earth and hence She is the Roman Goddess of the Earth. Ceres, the Goddess of the Earth was the daughter of Saturn and Ops. She was considered as one of the most kind and benevolent Goddess to the Romans people. God gives the gift of the harvest and the result for the cultivation of the soil. Among all the Roman Gods and Goddesses, Ceres is the only god which was related to the common people on a daily basis. Ceres was worshipped at her temple on the Aventine Hill which is one of the Seven Hills of ancient Rome.

Vulcan was the Blacksmith God whose father was Jupiter who was the king of all Gods. The mother of Vulcan was Juno, who is the queen of all gods. It is believed that the Vulcan will be the most handsome big born to such parents, howvever, as a baby, Vulcan was very small and ugly. It is also said that Juno was so angry by the early sight of Vulcan that She threw him off the top of Mount Olympus when he was just a baby. Vulcan used to fell for a day and night and finally fall into the sea. As soon as Vulcan was hit by the water, he broke off his legs. The legs were never healed properly and it can be easily seen when Vulcan walked. Later, Vulcan was found by a sea nymph and later she took him to her underwater home and raised him as her son.