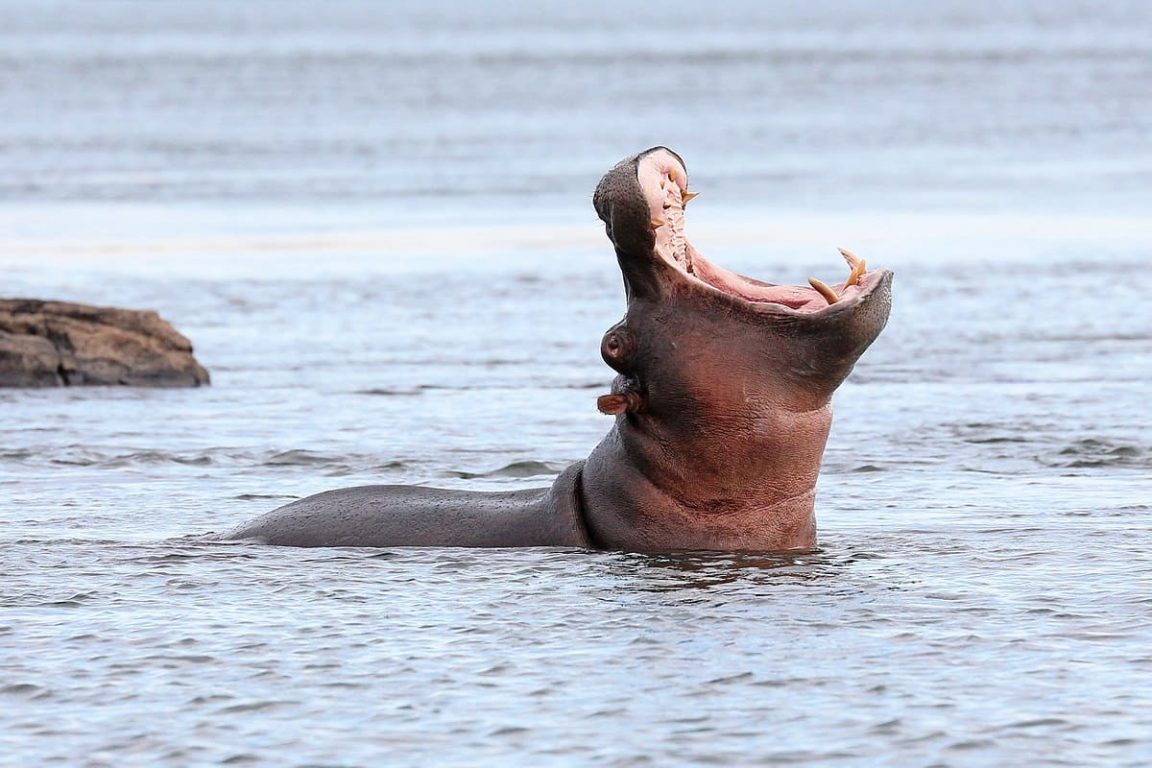 Africa is the land of the wild-landscapes, flora, and fauna in its most natural and raw form. An African Safari can be the most memorable experience of your life as it can expose you to some of the most impressive animals. Not all of them are adorable and some are better off in the wild forests. Africa is best known for its Big 5 -this group includes the African Elephant, Cape Buffalo, Lion, Black Rhino, and Leopard. This is a combination of predators and mighty terrestrial mammals of some of the world’s most impressive species. Let us explore 10 of the scariest animals in Africa that make for a once-in-a-lifetime sighting.

The African Lion is indeed the king of the jungle. They grow to a length of about 3 meters and stand about 1.2 meters tall. Lions are the kings of the jungle because of their power and strength. Lions fear no other animals and are well-known for their ferocity. In South Africa’s Kruger National Park, there has been news of people strayed at night who are often attacked and eaten by lions. Lions are said to be one of the aggressive animals responsible for the deaths of at least ten people a year, in the Kruger alone. As per reports from Tanzania, these powerful creatures have killed up to 70 people a year. It is one of the scariest animals in Africa.

These majestic animals are heavy-bodied creatures weighing as much as 1600 kg. They could be a pleasure to watch from afar, as they peacefully remain submerged in calm waters. In reality, they might not be as ‘gentle’ as they seem, and are among the most aggressive animals. Hippos have caused the deaths of around 3,000 people in Africa annually. What makes hippos so dangerous are their running speeds of 32 kilometres/hour and their massive jaws with really long canines. Many of them actively protect and defend their territories along the banks of rivers and lakes, when threatened.

One of the scariest animals in Africa, The African leopard is widely distributed in most of sub-Saharan Africa; they are the most elusive big cats and are skilled hunters. They can run up to 58 km/hr and are highly agile creatures that can climb trees while dragging a kill that is sometimes heavier than their own body weight. An injured leopard may become an exclusive predator and can attempt attacking livestock. Leopards lose their fear of humans when they raid livestock frequently. Some injured leopards become deadly man-eaters as well. It is one of the endangered animals in the United States.

One of the animal species that are most affectionate animals towards humans, the elephants are the strongest and largest land animals. African elephants can weigh up to 6,350 kg. They are strong creatures that are capable of carrying loads up to 9,000 kg, which is the weight of about 130 adult humans! They live in large groups and are protective creatures that can become very aggressive and dangerous if they feel threatened. According to WWF reports, over 200 people have been killed in Kenya by these elephants over the last 7 years.

Africa is the land of both black and white rhinoceros. These stocky animals are rather bad-tempered and extremely short-sighted, and won’t hesitate to charge anything they perceive to be a threat. Adult rhinos can run up to speeds of about 64 km/per hour for short durations at a time, despite their heavyweights that can be up to 2,800 kgs. So, always be sure to keep your distance. It is one of the endangered land mammals in the world.

This is Africa’s deadliest snake, being responsible for almost 32,000 human fatalities in a year. The puff adder is said to have killed more people than any other snake in Africa. Its wide population distribution, powerful venom, and extremely puzzling colour patterns make it a powerful killer. Puff adders are up to 1 meter in length. And has big fangs with powerful venom that can kill an entire grown man with a single bite.

Another deadly reptile, the Black Mamba is an extremely venomous snake found in Saharan Africa. They can grow up to 3 m in length and can slide very fast on the ground at speeds of 12.5 mph. It has a reputation as a formidable and highly aggressive species of snakes. The black mamba can attack humans if it feels threatened or cornered. Fatalities from black mamba bites can occur within as little as 20 minutes after being injected with their venom.

Crocodiles appear as majestic reptiles when we see them basking in the sun or gliding in the waters. However, they can look ominous when on the lookout for prey. They hover underwater, with only their nostrils above the surface. They can hunt their prey with a sudden, incredible burst of speed. They can jump suddenly and clamp its victim in heir deadly jaws, dragging them back under the water to drown. Crocodiles boast the strongest bite in the African Kingdom. They kill approximately 3,000 people per year, with the Nile and Saltwater crocodiles causing fatal attacks.

The African Buffalo is widely considered a very dangerous animal, killing approximately 200 people each year. These giant creatures can weigh up to 1.5 tons and can grow up to 1.7 meters in height, and 2.7 meters in length. When threatened, use their razor-sharp horns on their heads to attack. Buffalos have been reported to kill more people than they do animals. They usually travel in intimidating mobs. However, even if it exists alone and injured, it will actively stalk and kill humans. It is one of the scariest animals in Africa.

The Mossel Bay in South Africa, between Cape Town and Port Elizabeth, has abundant sea life with diverse fish along with a plentiful supply of Great White Sharks. These massive creatures are one of the fiercest predators of the oceans. The body of the white shark is robust and about 6 meters in length. They can weigh up to 3,400 kilograms. They have a very strong sense of smell and a clear preference of prey which is rich in fat.

The majesty of Africa’s wild animals cannot be completely described in words. Scary or adorable, they still remain unique creatures that walk the African continent with pride and valor.