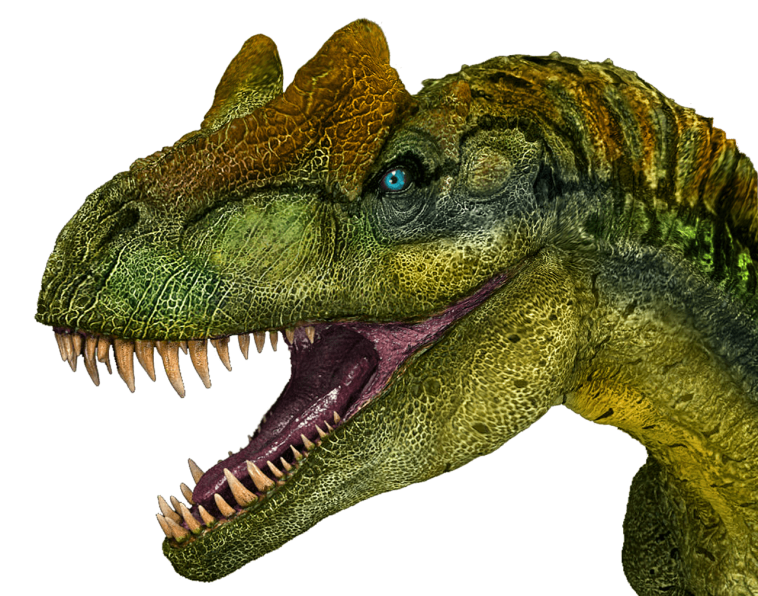 Dinosaurs conjure up the images of scary, terrifying and giant reptilian creatures that walked the earth thousands of years ago in the Mesozoic Era of evolution. They constituted the most diverse category of animals and yet the most horrifying ones with their gigantic sizes, ferocious looks, and unpredictable natures. Dinosaurs thrived in the planet’s consistently humid, tropical climate of the Mesozoic era. But in the late Mesozoic Era, as the Earth became cooler, climactic changes gradually led to the demise of the Dinosaurs. As of today, the Dinosaurs are extinct but still, none of us would like to cross paths with these huge creatures. Below we present the top 10 scariest dinosaurs that roamed our planet and became epitomes of terror and danger.

The ultimate carnivore, the deadly Tyrannosaurus Rex, commonly known as the T-Rex or the “King of Tyrant Lizards”, stood over 5 m tall and 12 m long, with a huge 7-tonne body. It had powerful hind legs and was considered to be a very agile and fast runner. It had sharp eyesight and a huge head studded with numerous, sharp teeth that made it the ultimate killing machine, about 67 million years ago in Western North America.

The Giganotosaurus was also known as the “Giant Southern Lizard”. These creatures lived in present Argentina, during the Late Cretaceous period, about 98 million years ago. The Giganotosaurus is believed to have been slightly larger than T. Rex, about 40-43 ft high and weighed about 14 tonnes. They had a large skull with sharp teeth; and short arms with three-fingered, clawed hands. They walked upright on two, large legs and could run up to 31 mph. Fossil studies show that the skull of this dinosaur could have been about 6 ft long! It is one of the scariest dinosaurs on planet Earth.

One of the scariest dinosaurs on planet Earth is the mighty Utahraptor was a heavily-built, largest, most dangerous raptor that ever lived. They weighed about a tonne. Dwelling in the early Cretaceous periods, this dinosaur was armed with a 1-foot long sickle-shaped claw on each hindfoot. It would kick, rip and tear its prey to death by repeatedly driving the killing claw into its prey. The Utahraptor hunted in packs like wolves and targeted prey many times larger than itself.

The Stegosaurus was a large dinosaur that featured unique bones and plates along its spine. They were all herbivores and had rows of unique bones that developed into plates and spines along their back and tail. This small-brained plant had a dangerously spiked tail that could easily lash out at a hungry dinosaur. The Stegosaurus walked the earth in the late Jurassic Period, around 150 million years ago. The US state of Colorado has listed the Stegosaurus as its state dinosaur! Because of its impressiveness, the Stegosaurus was represented in the popular Transformers toy line and animated series as Snarl.

This gigantic creature has been identified as the first, swimming dinosaur. The Spinosaurus was the biggest of all the carnivorous dinosaurs, even larger than a T-Rex. It weighed about 10-tonnes and usually dwelt around rivers, hunting for fish. It made use of its massive, crocodile-like jaws to attack like a shark to scare smaller, land dinosaurs. It is one of the scariest dinosaurs on planet Earth.

Majungasaurus, which means “Majungha Lizard”, was another category of theropod dinosaur that lived in the terrestrial habitat of Madagascar 70 million years ago. They were the last known dinosaurs that went extinct during the Cretaceous period. These predators were about 18 feet high and weighed about two tons. It had a small horn on its head and was the meanest beast on the island. Palaeontologists discovered that these giant killers were cannibals and did not hesitate to gnaw on each other during brawls between competing adults.

One of the scariest dinosaurs on planet Earth, the Diplodocus was known to be one of the longest dinosaurs that walked the surface of our Earth. They had a unique body construction because of their great body length. Their tails had two rows of bones on the underside to provide extra support and increased mobility. The Diplodocus was the best-known sauropod i.e. a long-necked herbivore dinosaur. With massive bodies that could be as long as 28 m, these dinosaurs spelt danger. They could whip their tails at great speeds, producing a canon-like boom to intimidate rivals.

The Allosaurus was a massive carnivorous theropod dinosaur. They lived about 155 to 145 million years ago during the late Jurassic period. The name “Allosaurus” means “different lizard”. An allosaurus adult was between 8.5 and 12m in length. It walked on two legs and had two arms on the front of its body.  When it came to just how wide the dinosaurs could drop their jaws, researches have concluded that the Allosaurus had an impressive gape of 79 degrees! Imagine a dinosaur’s mouth that wide open ready to pounce upon you. It could be the scariest thing possible.

Ankylosauruses were armoured dinosaurs that roamed the land in western North America. Their fossils have been found from the end of the Cretaceous Period, about 68–66 million years ago. These big and scary-looking creatures were, in fact, huge herbivores, with a rugged, heavily armoured body and a large club-like spiky tail. They used their dangerous clubs on their long tails to swing at approaching carnivores.

You can quickly recollect the star of the scary kitchen scene in the movie Jurassic Park. The terrorizing creature with its deadly curved toe claw was the Velociraptor! These predators were very agile and intelligent and may have hunted in packs. They lived about 75 million years ago and their fossils have been excavated in China and Mongolia. Although relatively small in size than other existing dinosaurs, they were dangerous attackers who surrounded their prey in herds.

Dinosaurs lived during the Mesozoic Era, popular as the Age of Reptiles. Sadly, they became extinct at the end of the Cretaceous Period. One of the most well-known theories for the death of the dinosaurs is the Alvarez hypothesis, or that a massive asteroid hit the earth leading to their mass extinction. These impressive though deadly creatures walked the earth for over 165 million years, and will continue to do so in our hearts.