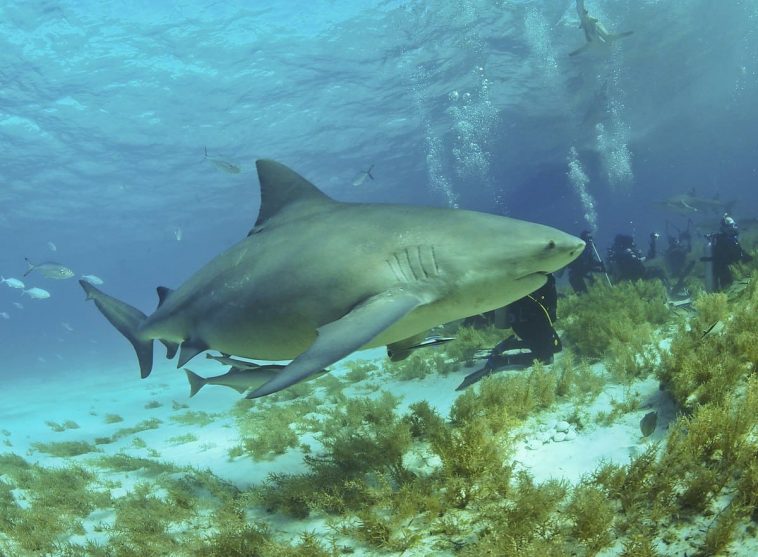 Scary sharks are undoubtedly the terror kings in the oceans. A shark attack is a primal fear and can give nightmares to even the most brave-hearted among us. A hungry shark with its huge jaw and sharp teeth can be the scariest and dangerous sight in the world. Even if they will not eat you, a shark attack can cause serious tissue damage and handicap. A shark can convert from a quiet sea creature to a ravenous hunting machine in seconds. There are about 370 species of existing sharks in the world today. Of these, the Whale Shark is the largest species, growing up to 40 m in length. The Pigmy sharks are the smallest, only 6 inches in length. Below we consider 10 species of sharks that are responsible for the most attacks on humans.

The most deadly and fearsome creature in the sky, the Great White Shark can grow up to 20 feet in length. They are bulky and muscular creatures that can weigh up to 5000 pounds. They are a species of large mackerel shark that can be found in the coastal surface waters of all the major oceans. Great whites have a grey and white, torpedo-shaped body, and are highly adapted apex predators. They prey mostly on seals, sea lions, small toothed whales, and sea turtles. They have 300 triangular teeth and cap apart their prey. Out of the 100 yearly shark attacks, 50% are said to have been caused by great white sharks.

It is a large macro predator, capable of attaining a length of over 5 m. They mostly dwell in warm waters in tropical and temperate regions around the central Pacific islands. The Tiger shark ranks No. 2 behind the white shark in the number of reported attacks on humans as per the International Shark Attack File. The tiger shark has vertical bars, like the tiger, that cover the sides of its body. These bars fade slightly as they become adults. They have special kind of notched teeth that can shear even the thickest hides. It is one of the most scary sharks in the world.

Whale sharks are the biggest fish in the sea. These massive creatures can be as long as a school bus and weigh up to 50,000 pounds. They are generally found in the waters along the Equator around South Africa, Central America, and South America. Each whale shark has a unique pattern of spots on its body like human fingerprints. Whale sharks have flattened heads like a whale and a blunt snout. A whale shark’s mouth is about 1.5 m wide. They have rows of over 300 teeth and can scare by their huge size, but otherwise do not generally attack humans.

This group of sharks has an unusual and distinct structure of their heads. Their head is flattened and is extended into a “hammer” shape laterally. This flat head helps them find direction and prey in the sea waters and is a highly specialized sense organ. Some of these species are aggressive and can attack humans. The Great Hammerhead Shark that can be up to 20 feet, is enormous and fierce and a dangerous predator.

Also Read: 10 Types of Whales In The World

Blue Sharks are easily identified by their pointed snout and large black eyes. Their name comes from their dark blue upper body. They can be up to 9-12 feet in length and are found in all oceans except in the frigid zones. Blue Sharks move in large groups and a group attack can be the most deadly thing you can ever imagine! Sadly, this species is almost threatened.

This shark species is distinguished by its bronze and brown colour. Its upper teeth are hook-shaped and not directly pointed like most sharks. They prefer warm temperate ocean waters and can attack humans even when unprovoked. Like other sharks, they get quite aggressive and agitated in the presence of a food source. They are migratory sharks and migrate for food and reproduction in the winter months.

The Oceanic White Tip shark is a large pelagic shark that inhabits warm tropical and temperate seas. It is primarily found offshore. This shark species is potentially dangerous to humans. These sharks have white tips on the first dorsal, pectoral, and pelvic fins, and also on the upper and lower lobes. The upper side of their body can be a brown, grey, or bronze colour and the underside is white.  This shark species is often the first species seen in waters in the case of mid-ocean disasters. The oceanic whitetip shark is a major concern for torpedoed boats and drowned plane.

One of the scary sharks on planet Earth, The Bull shark is also on the list of deadliest sharks. They are medium-size sharks, with thick, stout bodies. They have long pectoral fins and a short, blunt snout. They tend to head-butt their prey like a bull before attacking, due to which they got their name. They are aggressive and territorial about their homes. They dwell in shallow waters, where they can find many humans.  A person out for a simple swim could agitate these bull sharks without even knowing it. Around 75 shark attacks occur each year because of bull sharks alone.

These sharks prefer warmer, temperate waters across the whole planet. They can be around 10 feet -15 feet in length and weigh up 135 kg. The Shortfin Mako shark is the fastest-swimming shark in the sea. They can reach a speed of 42 mph and can strike their victims come out of nowhere. They regard humans as a threat and can become very aggressive when they detect human presence. These sharks surround their victim and tend to swim in figure-eight patterns before an attack. A Mako Shark, approaching their prey with mouths open, is a scary sight. Its is one of the most scary sharks in the world.

The Bronze Whaler Shark is a large shark with a long rounded broad snout and a bulge at the base of the upper fin. It can grow up to a length of 11 feet. It has upper teeth in the form of hooks and is an active fast-moving shark. It can leap out of the water and attack its prey. You can find them close to the seashores, feeding on schools of fish, within the surf zone. This shark is considered potentially dangerous to humans.

These are the top deadly and scariest shark species. An encounter with them can only be a nightmare in the sea. Though they do not easily attack humans, when they do, they stay true to their monster killer definition. These are the scary sharks in the world, Kindly post and do share your comments.