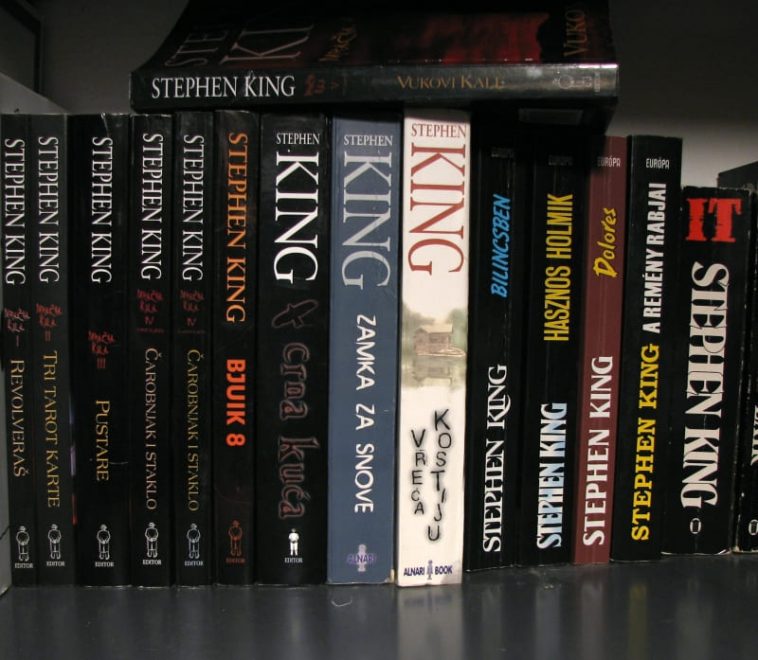 Stephen King needs no introduction. Recognized as one of the most prolific horrors and suspense writers in the world, he has successfully sent shivers down the spine of thriller readers. You may have across his work in many horror films and TV adaptations that have come out of his books. Stanley Kubrick’s iconic movie The Shining, and ‘It,’ the creepy clown classic are gems from King’s treasure.  His most famous books, like Pet Sematary, The Stand, and ‘Salem’s Lot, is more than a scare and may end up giving you nightmares. Here is a list of the top ten books by King.

The Shining revolves around Jack Torrance and his family. Jack is a struggling writer recovering from alcoholism and anger issues. He gets enrolled in a hotel caretaker job at a haunted Overlook Hotel. Jack’s son Danny possesses “the shining,” which are a myriad of psychic abilities. They make Danny supernaturally see the hotel’s horrific past through his prophecy. A time comes when Jack’s sanity gets possessed by the hotel’s supernatural forces after a violent snowstorm at the hotel. Ghosts, frightening visions, spectres, violent episodes, and all kinds of horror scenes build up the plot in a chilling tale, which reveals Jack’s dark side and ends with the explosion of the hotel along with Jack.

This is a horror novel by King whose story details the experiences of seven children. They are haunted terrorized by an evil “It” that appears in the form of Pennywise the Dancing Clown. It attracts children and exploits its victims to kill children. This novel chiefly focuses on childhood trauma, dark fantasy, and the evils of society. The book is renowned for winning the British Fantasy Award in 1987 and was later made into a super hit film. It is known for its exception 1400 page length and its scary movie adaption.

One of the Stephen King books, King, has successfully tried to tap into primal human fears with this dark novel, which is supposedly based on real-life events. Louis Creed, a doctor from Chicago, moves to a house near Ludlow, Maine, with his family and two kids. There is a pet cemetery, misspelt by children as Pet Sematary, where kids bury their dead animals, just close to his house. The spine-chilling events of accidents, killings, dead animals and people, walking corpses, and funerals make this quite a sinister novel.

This book is the first novel that made him an overnight success. It is the story of Carrie White, who is an ever-bullied high-school girl, who gradually discovers that she has telekinetic powers. She comes from a rigidly religious and repressed household and is tormented by her peers at school. After a deadly prank at her senior prom, Carrie remembers her telekinesis and decides to avenge her tormentors for their cruel actions. A sequence of events follows Carrie’s burst of rage, wherein she starts a violent fire at school and then destroys gas stations and power lines on her way home. She even stabs her mother and kills two of her tormentors, Chris and Billy, before finally dying. It is one of the Stephen King books.

It tells the memoirs of death row supervisor Paul Edgecombe, who is in charge of E Block, commonly known as Green Mile, because of the tiles’ green color in the long corridor leading up to the electric execution chair.  Paul meets John Coffey, who was charged for the brutal murder of two young girls. Among the cruel and rough jail inmates that have been accused of heinous crimes, Coffey is the one who possesses inexplicable healing abilities. He performs healing miracles on humans and animals alike by breathing a cloud of black insects that turn white and vanish. A tightly gripping plot revolves around several jail inmates. Coffey is ultimately found to be innocent but had to undergo execution on the electric chair in the absence of proof.

A cleverly crafted psychological thriller, Misery, revolves around the relationship between a famous writer Paul Sheldon and his psychotic fan and serial killer, Annie Wilkes, who is also his nurse. Paul gets seriously injured in a car accident when former nurse Annie brings him to her home. What begins is a sinister course of Paul’s treatment with doses of addictive pain medication and everything that causes him misery. A violent and brutal chain of events follows, where Annie tries to kill Paul with a chainsaw but dies during the struggle.

This book is another gem from King’s horror treasure trove. It is a post-apocalyptic dark fantasy novel set in the backdrop of human society that has been wiped out because of a super-flu pandemic caused due to an engineered virus “Captain Tripps.” What remains are the survivors split into two groups- the evil group led by Randall Flagg and the good one led by Mother Abigail. The plot prepares for the final stand between good and evil, as the two groups separately re-build society until one must destroy the other.

This is a series of 8 novels by King.  The story combines all elements of science, fantasy, and horror. Roland Deschain is the last living member of a knightly Gunslinger order. His ultimate opponent is Walter O’Dim or the Man in Black, who keeps fighting to prevent toppling the Dark Tower. This tower is a 600ft, black-stone tower that balances all the realities in existence. It is held in place by six giant invisible beams that stretch out into the universe. The story revolves around the two men locked in an eternal battle between good and evil, with the fate of worlds at stake. These novels show connections from many of King’s previous horror novels.

One of the Stephen King books, Doctor Sleep is the sequel to King’s 1977 novel The Shining, released in 2013. This book boasts of securing the first position on The New York Times Best Seller list. Dan Torrance, a struggling alcoholic, is traumatized by the sinister events at the Overlook Hotel when he was a child. He meets Abra, a teen who has the same extrasensory gift of the “shine” as Dan. Together, they put up a battle against the True Knot, a quasi-immortal cult with dark psychic powers. Its members try to feed off the shine of innocents to become immortal. This novel was made into a supernatural horror film by the same name in 2019.

This is again one of the best works of King in 2019, even when he is in the seventies. He has successfully stirred up elements of curiosity, insecurity, and childhood trauma. In this novel, the titular Institute is a sinister, black site under Mrs. Sigby and her team’s leadership, that houses and experiments on psychic children—kids who have supernatural gifts like telekinesis and telepathy. Victims disappear in the Back Half of the Institute, which has a check-in but no check-out.

These are some of the best novels by King of Horror, Stephen King. He has published 61 books, which have sold more than 350 million copies worldwide. He was awarded the US National Medal of Arts in 2015 for his contributions to literature. He has ruled the roost in horror, fantasy, and supernatural genre, and has accomplished himself as both a critically acclaimed and professionally successful author.