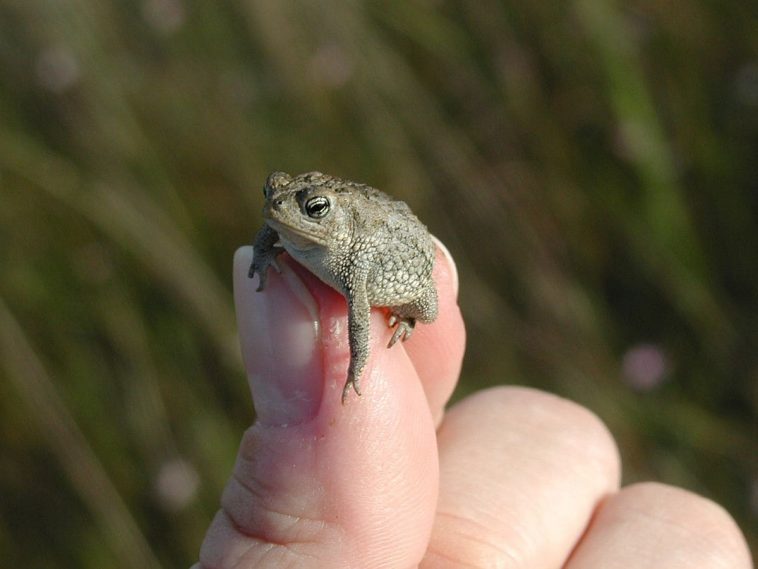 Toads are a frog species that belong to the Bufonidae family. They belong to the class Amphibians, which are cold-blooded vertebrates that can spend their lives both on land as well as water. They are an important constituent of ecological food chains. They are significant predators of insects and other animals and serve as a food source for fish, birds, mammals, reptiles, and other amphibians. They have dry, leathery skin, short legs, and large bumps covering the parotid glands.  Toads are found on all continents except Antarctica and isolated islands like New Zealand, New Guinea, and Madagascar. Toads are strictly carnivorous and feed on beetles, slugs, crickets, flies, and ants. Toads exist in diverse species that range from the very small to the very big ones, and the most colourful to the most poisonous ones. The smallest North American toad is the Oak toad which reaches a length of only 1.3 inches, while the Cane toads are the largest toads and grow up to 9 inches in length. Let us explore the wild world of toads with these 16 toad species listed below.

The Common Toad, as its name suggests is the most commonly occurring toad species that is found abundantly in Europe, in the western part of North Asia, and Northwest Africa. They can grow up to 15 cm in length and are mostly nocturnal animals that stay hidden during the day. Considered ugly for its warts and ancient associations with witches, the common toad is a gardener’s friend, as it can feed on slugs and snails that can destroy the garden. These toads can be dark brown, grey and olive green to sand-colour and love damp logs and leaf piles as homes.

The American Toad is a common species of toad found in the United States and Canada. It exists in three subspecies—the Eastern American toad, the Dwarf American toad, and the Rare Hudson Bay Toad. American toads have parotoid glands behind their eyes that can secrete Bufotoxin, which is a mild poison. It can irritate human eyes and mucous membranes and is dangerous to smaller animals.

The Natter Jack toad is native to the sandy areas of Europe. Adults can grow up to 60–70 mm in length. They are distinguished from common toads by a yellow line down the middle of the back and parallel paranoid glands. Natterjacks have a poisonous skin that prevents predators from attacking them. They can survive up to 15 years in the wild. Global warming and rising sea levels have taken up the freshwater habitats of these toads making them endangered now.

This species is a typical North American toad species that can be kept as pets. They can be brown, grey or olive green in colour and are mostly nocturnal creatures. They can dig burrows to hide in during the day to escape predators like snakes and raccoons. Fowler’s toad can excrete a toxin on its back when attacked by small predators that can sickness.

Wood house’s toad is a medium-sized true toad, that is about 3-5 cm in size. It is native to the United States and Mexico and found in plentiful in wooded areas, mountain canyons, riverbanks, marshes, farmland, gardens, and even residential areas. Woodhouses have warty skins and horizontal pupils in their eyes. Their glands and warts can produce a poison.

With the name of the mighty oak tree, the Oak Toad is actually the smallest species of toad in North America. They can be as small as half an inch, with a length of 19 to 33 mm. This small toad can be brown, grey or black, often with reddish warts. They are found only in the Coastal Plain and the pine woods, savannas, and forests. The oak toad eats small insects and ants. It is mostly diurnal and spends much of its time burrowed into the soil. They have a distinct high-pitch call.

This species of toads are native to the south-western US. They are small, about 2 inches in length, and have a yellowish-green skin with black spots. They are found in large numbers around Arizona and New Mexico in semi-desert grasslands, readily after short bursts of rainfall. They have a high-pitched nasal call.

The Cane Toad is the world’s largest toad, native to South and Central America, the Caribbean, as well as Northern Australia. This toad is a giant toad that can grow up to 20 cm in size. They are generally not poisonous or dangerous to handle. However, they can secrete poison from their parotid glands behind their ears, when they are stressed out. These toads can survive extreme temperatures and can eat anything dead or alive. They have multiplied in great numbers in Australia and have almost taken the status of toxic invaders.

Bufo bankorensis is one of the toad species that belongs to the family Bufonidae. It is mostly seen in Taiwan and usually distributed at ane elevation of 3,000 m (9,800 ft) above sea level. It can reach upto 15 cm (5.9 in) in length and 20 cm (7.9 in) in snout-vent length. Female species is little larger than males and his skin is rough and covered with pointed tubercles of various size. It loves to thrive in broadleaf forests, cultivated fields, mixed forests, and orchards.

Great Basin spadefoot is a toad species that belongs to family Scaphiopodidae. It can reach upto 3.8 to 6.3 cm long. Talking about the appearance, the species is coloured grey, olive or brown. The species thrive in dry habitats and dig a burrow where they will spend long times of cold and dry weather. The skin of the species is soft as compared to other toad species. The natural habitat of the species includes pinyon-juniper, ponderosa pine and grasslands.

It is also known as Asian black-spined toad, Asian toad, black-spectacled toad, common Sunda toad, and Javanese toad. The species can grow upto 20 cm (8 in) long and its usually breed during the monsoon season. It can be seen in large numbers when the monsoon finishes. Talking about the appearance, they have bony ridges and usually are short and blunt. It is mostly seen in northern Pakistan through Nepal, Bangladesh, India including the Andaman and Nicobar Islands and other regions of the Asian countries.

European fire-bellied toad also known as a ringing frog, fiery toad, fire frog, and fire belly toad. The species is native to mainland Europe. Talking about the appearance, the body is traversed by black spots and bright red bellies wit stips. Ringing toad is the largest of the bombing family and listed under than Fire-bellied toads from Asia. It can grow upto 26–60 mm long and may weigh 2-13.9 g. It loves to eat insects, spiders, millipedes, molluscs and earthworms located near or in the water.

Common midwife toad is listed under midwife frog of the family Alytidae. The species were mostly seen in Belgium, France, Germany, Luxembourg, the Netherlands, Portugal, Spain, Switzerland and some regions of the United Kingdom as well. The natural habitat of species includes temperate forests, dry forests, rivers, marshes and urban areas. It can grow upto a length of 5.5 centimetres (2.2 in), howvever, it is usually smaller than this and female are larger than males.

Toads may appear ugly, rugged and dangerous but they are a significant part of our ecological system and source of food for other animals and birds.