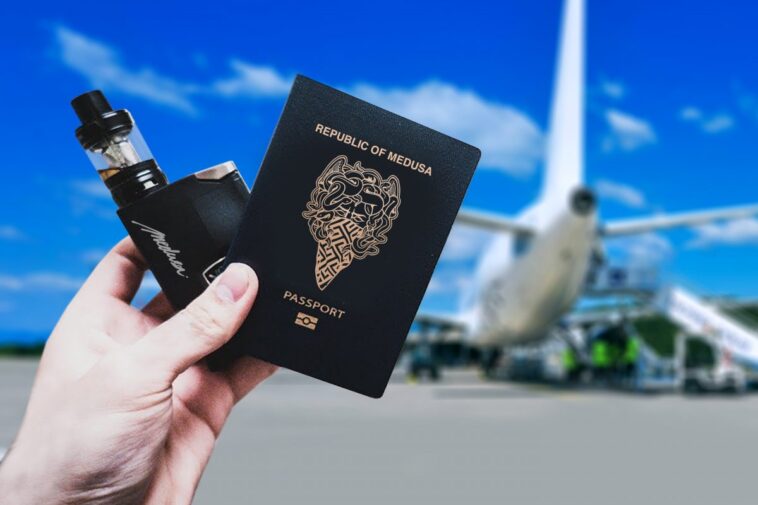 Switching from cigarettes to vaping devices has many advantages, but it also comes with a couple of flaws. One of the most common is concerning traveling. While moving somewhere via car, bus, train, or even ship, won’t be an issue, the one that confuses is the matter of if you can bring vape on a plane. During the flight, you’re not allowed to sing it, which makes it no different than regular smoking. But what about travel? Are you allowed to move with your e-cigarettes freely? You’ll be glad to hear that this issue is somewhat regulated, and there are standards set for both the vaping device and the e-liquids. So, let’s see what laws and regulations have to say about whether it is safe to travel with your vape device.

Can You Have Vape Device on Board?

We’re going to go straight in on this one, but with a little bit of confusion. How? Well, we’re going to say it all depends. There are two ways to have your e-cigarette on a plane. You can have it on yourself as a personal object, or you can have it in the luggage. Depending on what you decided, there are specific rules you need to oblige. If you don’t, there’s a chance that your device is going to be confiscated.

The good news is that you can have it with yourself in your carry on bag. Most vapers are going to feel good about having their device close to them. As we said, you’re not allowed to use it. The one mistake you must avoid doing is putting it into your checked luggage. It is always better to keep it close to you, as having it in the luggage can cause issues. So, whatever you do, keep it in your carry-on bag, and do not try to consume it. It’s just plain decency in this department.

When it comes to luggage, you need to understand that it is a big no to leave it there. In fact, it is strictly forbidden to have an electronic smoking device in your luggage. The reason behind this decision by the TSA is that these cigarettes contain batteries that can cause fire, and consequently be a primary reason for a vast misfortune which can endanger lives. This is why you mustn’t leave it inside your bag. If you do this anyway, and the airport control finds it, you can find yourself in quite a pinch.

This one is relatively straightforward. As the name suggests, e-liquid is a liquid, after all, and there are regulations in place for taking fluids on board a plane. If you’re not aware of what you need to do, a short explanation will follow. With you, in the cabin, you can have no more than 100ml of liquid. If you plan on carrying more than this amount, it needs to be part of your luggage and stored in safety containers.

If a vaping device and e-liquids are a part of your life, and you can’t go without them on travel, we’re here to give you a few tips on how to travel with your vape device. If you plan on a long-distance, multi-day vacation, you better be prepared with large quantities of your favorite e-liquid you can get from a trusted supplier such as www.vaporsolo.com. Now, let’s see how to vape and travel safely at the same time.

Tips for Bringing a Vape on a Plane

As we already said, you can have it with yourself, and not as a part of your luggage. But this is not all. We’re going to give you a quick walkthrough on what to do and how to behave when traveling with a vape device. The essential thing to do is not to ever use your vape while onboard a plane. Once you are on a plane, it is not safe nor allowed to use or re-charge a vape device. The recommended course of action would be to keep it separated from the battery to ensure there is no chance of any kind of accident. You also need to be aware that some airlines have an isolated set of rules that they use, and you would be wise to be introduced to these before getting on a plane. It is not an exception when an airline company has a stricter set of rules than those installed by TSA.

While e-liquids are a go on most planes, you mustn’t mistake them for opiates. You’re not allowed to carry marijuana with you on a plane regardless of the state you’re in. Many people out there are using vaping devices to consume CBD oils or weed, and they get an impression this it is legal to carry on a plane. It is not, and you’re better off leaving these substances at home before you get in trouble with the law. As we said, federal law forbids transporting this substance regardless f you live in Colorado or Washington State. It is not legal having it on you or as a part of your luggage.

We mentioned both weed and CBD, and while they belong to almost the same group, they differ a bit. CBD is more and more legalized in many countries, and the rules might apply differently, especially if you have a medical confirmation that you need it. While interstate travel authorities might look through the fingers in some instances, if you’re traveling abroad, you are better off getting to know the country’s laws where you’re traveling. E-cigarettes are treated differently depending on the part of the world you live in, and somewhere they’re not as much as welcomed. The last thing you’ll want is to get in trouble with the law in a foreign country. Now that you have come to the end of our article, we’re sure you know much more than you did only moments ago and are at least partially set to traveling with a vaping device.