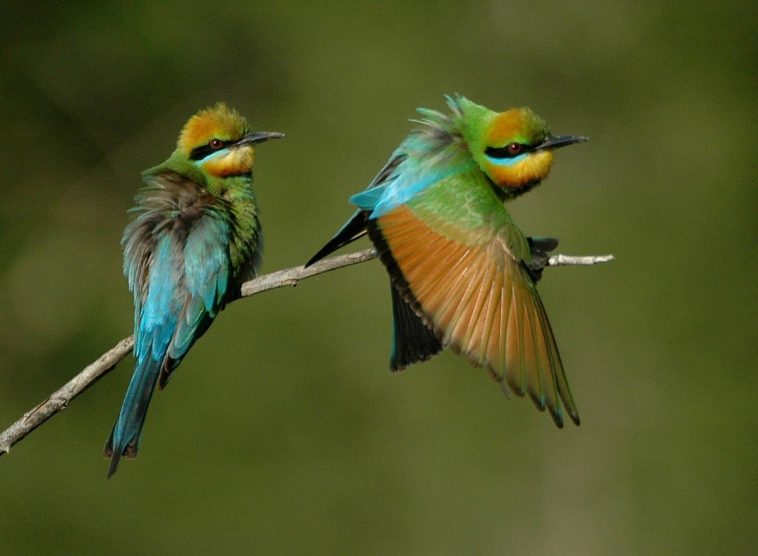 Birds are one of the most beautiful creations of nature. According to the Cornell Lab of Ornithology, there are 10,404 species of birds out of which 101 are listed as extinct, however, there are other birds extinct too but probably there is no data for it. There are other species as well in nature that has not been discovered yet. According to the data published in The Royal Society, 25-100 species of birds remained to be discovered. Birds are also divided into different groups known as families just like animals and each family is separated into species. Here is the list of 10 beautiful types of birds with names and pictures,

Toucan is a beautiful and popular bird species for its large and colourful bill. Currently, there are 40 known species of toucans mostly seen in Mexico, Central America, South America, and the Caribbean. The bird species can survive in different habitats but prefer life in tropical rainforests. It can grow upto 25 inches in length and 24 ounces of weight. It has a unique and it can regulate body temperature by using it. The average lifespan of toucans is 20 years in the wild.

Swift is a bird species that belong to family Apodidae. Currently, there are 75 species of swifts that can be found around the world except in polar regions. It is very closely related to the hummingbirds and also listed as one of the fastest birds in the world that can fly with the speed of 70 to 115 and travel around 124.000 miles per year. Only temperate areas Swift bird species are migratory birds and there are some European species of swift that travel approximately 4.000 to 6.000 miles each year on their way to Africa. The average lifespan of species is 5.5 years in the wild.

Also Read: Types of Hummingbirds In The World

Hummingbirds are the smallest and cutest bird species and till now there are 343 different hummingbird species known mostly seen in the North and South America. The numbers are declining because of the habitat destruction and global warming which is impacting the migratory patterns and changes the normal behaviour of hummingbirds. Almost all hummingbirds can reach 3.3 inches in length and weight of approximately 0.07 and 0.7 ounces. The bird species are known for producing a umming sound produced by the wings and hence the name. It is also one of the intelligent bird species and knows very well which flower they have already visited and even how much time each flower required for nector falling.

King Fisher is medium size bird species that belong to the kingfisher family. As of now, 87 species of kingfisher that is divided into three groups of river kingfishers, tree kingfishers and water kingfishers. They can be seen all around the world with the majority ones in tropical areas. It can reach upto 4 to 18 inches in length and 0.33 to 16 ounces of weight. The bird species is carnivorous that loves to eat fish, crayfish, frogs and snails. The average lifespan of species is 6 to 10 years in the wild. Amazon Kingfisher is the beautiful birds Of Brazil.

Parrots are one of the most colourful birds with over 372 species of parrots known that is mostly seen in the tropical and subtropical areas of South and Central America, Asia, Africa, Australia and New Zealand. The most popular species are Macaws, Amazons, kea, kaka, lorikeets, parakeets, lovebirds and cockatoos. It can grow upto 4 to 40 inches in length depending on the species and weighs upto 9 pounds of weight. The smallest known parrot is a pygmy parrot which is 3 inches long and weighs 0.4 ounces. The smaller species of parrots can survive upto 10 years in the captivity, however, larger species have a lifespan of nearly 80 years.

One of the best Waterfowl Birds, Spoonbill belongs to genus Platalea is one of the largest and long-legged wading birds. These birds can be seen across the world except Antarctica. As of now, six species of Spoonbill are identified and they all are placed in one genus and even sometimes been split into three genera. Talking about the appearance, all bird species has large and flat bills to help them through shallow water and sweeping the partly opened bill from side to side. These birds prefer both fresh and saltwater.

Rainbow bee-eater Facts is the tree-dwelling bird that belongs to the family bee-eater family. The bird species prefer near the lakes and rivers. It can reach upto 7.5 to 10.6 inches in length and 0.7 to 1.2 ounces of weight. Talking about the appearance, it has a golden yellow crown with black eye-line and orange-yellow throat. As soon as they predict predators, it used to make a loud sound. The natural enemies are dingoes and monitor lizards. The average lifespan of Rainbow bee-eater is 2 years in the wild.

Guinea fowl is a medium size bird species that belongs to the family Numididae. There are around 6 known species of guinea fowl that are mostly seen in Africa. It can reach upto 16 to 28 inches in length and 1.5 to 3.5 pounds of weight. Talking about the appearance, it has a bare head and neck and the rest of the body is covered with dark grey or black feathers with small dots. The natural enemies of the bird species are wild cats, wolves, snakes, crocodiles and humans. The average lifespan of Guinea fowl is 10 to 20 years in the wild.

One of the beautiful types of birds, Woodpecker is one of the amazing types of birds with over 200 species till now that can be seen around the globe except in Australia, New Zealand and Madagascar. There are many species of Woodpecker are extinct because of habitat loss and increased urbanization. It can reach upto 20 inches in length and the smallest species is 3 to 4 inches long. The unique part is that it can peck 20 times per second and produces approximately 10,000 and 12,000 pecks per day. It is also listed as one of the craziest animals in the world.

Barn swallow belongs to the group of songbirds and till now ix subspecies of barn swallow are known that can be seen all over the northern hemisphere. It can reach upto 6.7 to 7.5 inches in length and 0.56 to 0.78 ounces of weight. Talking about the appearance, the upper bodies are covered with blue feathers, howvever, the bottom side is white. The bird species migrate to the south during the winter to avoid winters and lack of food. The average lifespan of species is 11 years in the wild, howvever most of them live upto 4 years.

These the different beautiful types of birds in the world. Kindly share and do post your comments.